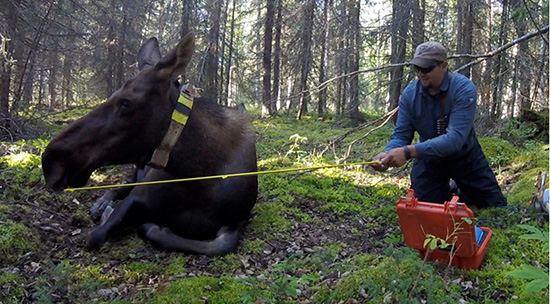 Dan Thompson takes the temperature of the animal's breath

The cow moose was bedded down in the shade of an aspen grove, indifferent to the man crouched nearby. Wildlife biologist Dan Thompson pointed a thin pole at one nostril of the moose, taking the temperature of the animal’s breath as it inhaled and exhaled the warm summer air of Alaska’s Kenai Peninsula. The measurement provided a remarkable insight into how moose deal with hot weather.

“Elk, mule deer and horses, they sweat, but moose don’t sweat,” Thompson said, explaining how moose dissipate body heat by breathing. “I was able to take a fine wire thermocouple about the size of a sewing needle, stick it on a tent pole, and put it right in her nostril. When they’d lie down, they’d have so many flies around them they didn’t notice the wire in their nostril.”

Thompson learned the moose was inhaling ambient air that was 68 degrees Fahrenheit and exhaling breath a second later that was 95 degrees. Taking 60 breaths every minute, the moose was pumping excess body heat back into her environment.

Moose like this thrive in Alaska’s post-ice-age landscape and have adapted to a climate that swings from brutal sub-zero winters to pleasantly warm summers. Conventional wisdom held that at a certain point, ambient summer air temperatures began to stress moose (14 degrees Celsius, about 57 degrees F), but new work finds there is more to moose on a hot day than this simple relationship. Dan Thompson and his colleagues working at the Kenai Moose Research Center are advancing our understanding of how moose cope with heat.

Thompson is based in Soldotna, and conducts research at the Moose Research Center, 90 minutes away on mostly gravel backroads into forested Kenai lowlands surrounded by the Kenai National Wildlife Refuge. The center is home to about a dozen relatively tame moose that enable a wide variety of research projects. 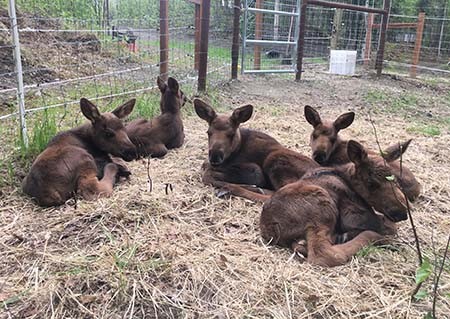 Moose calves in the summer of 2019 at the Moose Research Center.

“We hand-raise the calves,” Thompson said. “We get them when they’re about a day old from our captive animals and train them to do things like get on the scale and let us take saliva, so they are accustomed to it so they can do it later in life. We call them tame, but that doesn’t mean they are domesticated.”

He said when working closely with powerful, large animals, it’s important to understand they have their own personalities and moods. “Some let you do more than others,” he said. “Their personal bubble might be smaller or larger on different days. If they don’t want to play anymore, they can get ornery.”

Thompson started work at Fish and Game in 2012, as he was finishing his master’s degree at the University of Alaska Fairbanks, studying nutrition in caribou and reindeer at the Large Animal Research Center. He began work on his doctorate in 2015 on moose, focusing on one conundrum.

A study done in Alberta in the 1980s with a couple captive moose established threshold ambient air temperature values at which point moose began to show signs of heat stress. These thresholds have been applied to wild moose, but it contradicted what Thompson and other biologists saw.

“We have hot days here on the Kenai and in the Interior, and we have moose populations that are capable of handling it,” Thompson said, noting that the parameters led to over-estimating stress. “We saw moose running around being moose with nothing apparently wrong going on. But by those parameters they should be heat stressed. We wanted to look at the animal’s body temperature - that’s what they are trying to thermoregulate.” 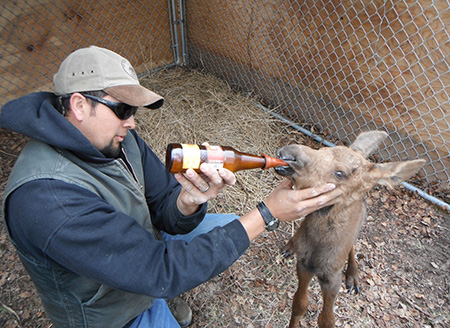 The perfect place to do that is the Kenai Moose Research Center. In the late 1960s Alaska Department of Fish and Game, in partnership with U.S. Fish and Wildlife Service, enclosed four tracts of boreal forest and wetlands, each a mile square, with fourteen miles of tall fencing. The moose habitat has been inhabited ever since, but the moose therein are not completely wild. By bottle raising moose and conditioning the annual cohorts of calves to human contact, biologists like Thompson have access to mostly cooperative subjects.

Fish and Game staff, University of Alaska biologists, and researchers from Norway, Sweden, Russia, Canada and the Lower 48 have published more than 150 scientific papers and contributed to over 20 graduate study programs based on work at the Moose Research Center. The center enables long-term research on the same animals, an opportunity rare in the wild. It's tough for a biologist to dog the heels of a wild moose to watch exactly how it eats, or to closely monitor the pregnancy of a cow moose. But tame moose don't object too much to human company.

A moose’s body temperature is slightly warmer than ours, ranging between 37 and 39 degrees Celsius - about 98.6 to 102.2 Fahrenheit. Pregnancy influences body temperature; which also varies daily and shifts with the seasons. During the summer, a wave pattern of daily variations shows a low point in mid to late morning, and an evening peak around 9 or 10 at night. Moving outside the normal variation is a metric for heat stress. A body temperature elevated 1.25 degrees Celsius (2.25°F) above the normal zone indicates a heat response day. 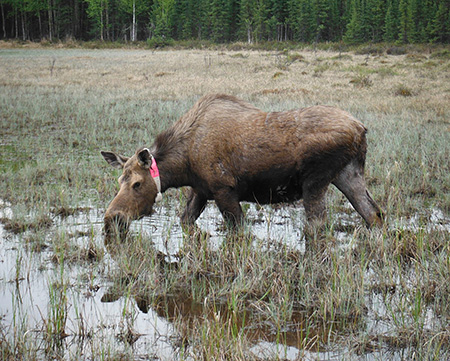 A collared research moose wades in shallow water in one of the KMRC enclosures.

“We looked at heat response days and noted two peaks,” Thompson said. “One is in early to mid-June, that’s when we have peak solar radiation here in Alaska, and moose still have a lot of their winter coat on at that time, they’re still shedding. The second peak is in the later part of July and corresponds to the summer peak in humidity and ambient air temperature here on the Kenai.”

Moose and other animals employ a variety of mechanisms to cope with heat, some are behavioral, and some are physiological. Some animals pant and sweat, moose exhale hot air. That works a lot better when the air is dry, so humidity is a factor, not just air temperature.

“The more humidity in the air, the less the ability to lose heat through evaporation from the respiratory tract, which is one of the big ways to lose body heat,” Thompson said.

Movement generates heat, and on a hot day a moose might be less likely to move around to forage. Digestion generates heat, especially in the microbe-rich guts of ruminants. Coping is a tradeoff.

“Moose can do things like not eat so much on a hot day to reduce heat generated from digestion,” Thompson said, which would be a trade-off, “with lower intakes, did that moose ingest enough forage to build fat or muscle?” 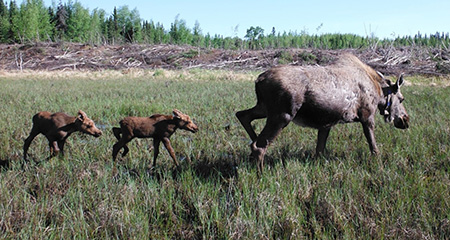 A cow moose and calves

To better understand the effects of heat on moose, Thompson and his colleagues looked at studies done on antelope in Africa.

“They came up with zones,” he said. “Essentially, the first zone is when the animal is able to maintain its body temperature with no problem. That’s the prescriptive zone.”

“Then you move into the tolerance zone, where you might be exceeding the normal daily range of body temperature, but you can tolerate it, maybe at the expense of some metabolic functions, like accumulating body fat or lactating. These trade-offs start occurring in the tolerance zone.”

Above the tolerance zone is the survival zone. When a human or a moose enters that zone, if they do not quickly start to bring down their body temperature they may go into heat shock, which can be fatal unless action is taken.

“For a moose, that means getting in a lake or river and cooling down,” Thompson said. “Above that, a moose in heat shock more than likely will die.”

An infra-red image shows warm blood in the arteries of a moose's ear.

Other questions were raised: If they’re out moving, is there a certain level of movement where body temperature begins to rise? What else is part of the activity - like drinking water? What time of day do they tend to move? To make thermoregulatory assumptions about activity and habitat selection, Thompson wanted to pair those data with continuous body temperature measurements.

Heart rate was also assessed in a low-tech fashion, thanks to the tolerance of the moose to human company. “When they lay down, you can see their pulse pulsing in their neck and we could count heart rate that way,” Thompson said. “One interesting thing there – as ambient air temperature increased, we saw a decrease in heart rate, which is counter intuitive, but makes sense because there are a couple things that could be going on.” 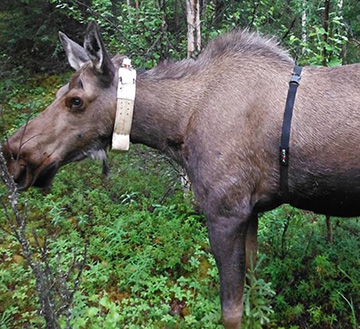 A heart rate belt transmits data to the researcher.

In cattle, they have found that during warm temperatures they drink more water, which increases the volume of blood and decreases the heart rate. Measuring water intake is challenging and has not been documented in moose. In domestic sheep, they have also documented a decreased food intake during warm temperatures, which lowers their metabolic rate and decreases heart rate. A third factor involves the chambers of the heart.

“If you think about your heart, the ventricle needs time to refill, so the faster you pump, there is less time for it to refill,” he said. “If you slow down and allow the ventricle to fill with warm blood, you’re pushing more warm blood to extremities and out of the body core.”

That can be seen in the infrared pictures of an extremity like the ear. In late spring, the hair of a moose thins around the ears, eyes, and nostrils, exposing the skin, and stays relatively hair free into July.

“On the ear, you can see arteries, the warmer areas, dissipate heat into the core of the ear,” he said. “We looked at the temperature over an artery, which is bringing in that warm blood, compared to other parts of the ear. So, if the whole surface of the ear starts to approach the temperature of the artery, because of vasodilation, it pushes the heat out to the extremities to help dissipate that to the environment.” 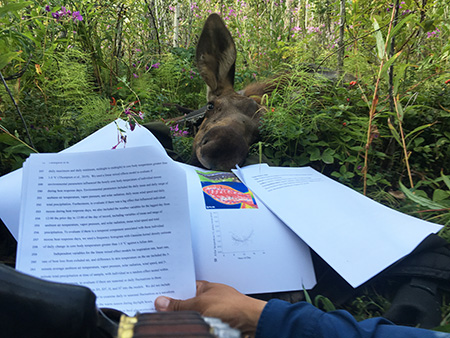 Dan Thompson edits his manuscript in the field with the assistance of a moose calf.

Thompson has published this work in the Journal of Mammalogy and the Journal of Thermal Biology. But it’s also part of a bigger picture. He said several other biologists, including researchers in Minnesota and Norway, are working on related projects. Some relate to innovations in techniques and applications of these tools and methods to study wildlife.

Additionally, Large scale fires have historically altered moose habitat in Alaska, while climate change is affecting vegetation communities, with trees and shrubs growing in formerly open country. In some cases that means animals like moose and beaver are expanding their ranges in Alaska, while other animals are expanding their ranges into Alaska, colonizing new areas. Mule and white-tailed deer are expanding their ranges north and west, and bringing with them potential parasites that have had detrimental effects on moose populations in the lower forty eight and Canada. It is important to understand moose thermoregulatory adaptations because moose in Alaska live in a dynamic environment that varies by day and season.

Using the historic thresholds set in the 1980’s may overestimate the influence of warm temperature on moose and may overshadow these other factors that influence moose populations in Alaska.

Dan Thompson Video Dan prepared a three-minute video at the research center with a moose, summarizinng his work in advance of a presentation.

More on moose research at KMRC