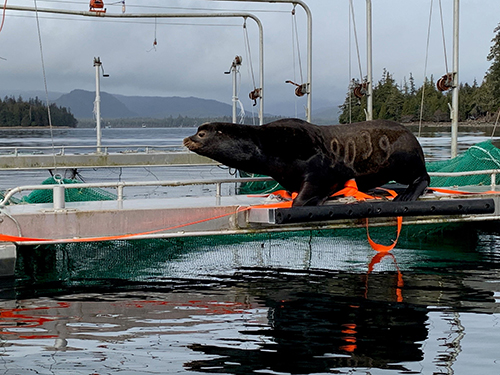 Alaska fishermen working the herring roe on kelp fishery near Craig, Alaska, documented the big adult male in mid-April, 2020. His identity as a native of the Los Angeles area was confirmed by the number 9039 on his left side. He was marked by federal marine mammal researchers as a pup at San Miguel Island in in the California Channel Islands on Sept. 25, 2006. The Channel Islands are off the coast of Southern California northwest of Los Angeles.

Robert DeLong is a marine mammal researcher with NOAA (National Oceanic and Atmospheric Administration). He wrote: “At time of marking he weighed 17.6 kg and was 96 cm in length. He should be full grown at age 13+.” 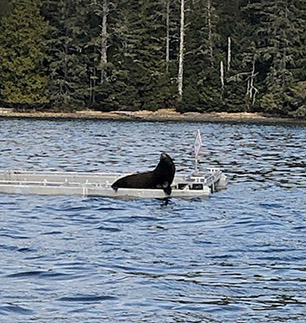 DeLong provided a re-sight history of 9039. It seems this is the first time this particular animal has visited Alaska, although it’s not uncommon for California sea lions from the Channel Islands to travel the west coast. DeLong wrote: “Each year territorial males leave the California Channel Island rookeries in August and move north to Northern California through Southeast Alaska. They actively pursue concentrations of energy rich (spawning) prey, beginning with salmon in September, market squid in December in inland waters of Washington, Eulachon in January-April (Columbia River to Alaska and herring in December-April (San Francisco Bay to Alaska), before beginning southern migration back to the rookeries in May of each year.” 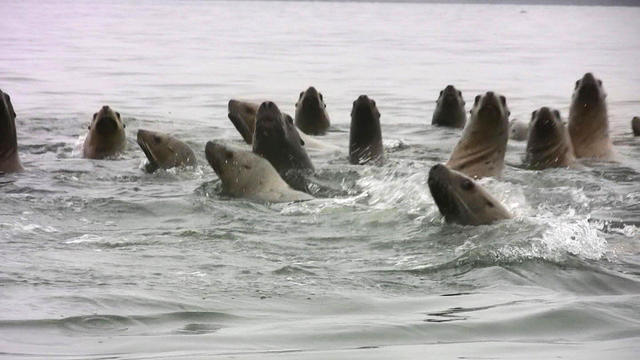 He was not re-sighted north of California until he was seen in Southeast Alaska in 2020.

Sea lions mate in the spring. An adult male establishes and defends a territory (hence the term, territorial male) at an established breeding site known as a rookery, like the one at San Miguel Island, and the same rookeries are used year after year.

Researchers mark animals to learn about their movements, their fidelity (loyalty) to areas, and their reproductive and life history. Marked Steller sea lions in Alaska have provided a wealth of such information. California sea lion researchers with NOAA are looking at the animals’ diet and foraging ecology, distribution and movements/migrations, threats such as disease, contaminants and entanglement, and their genetics. 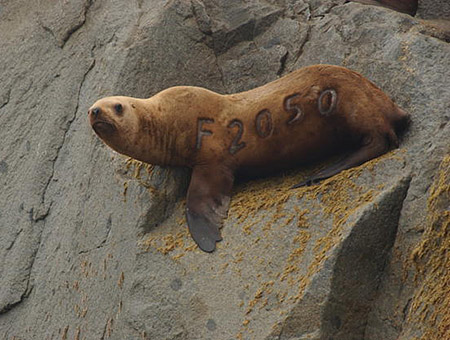 A marked Steller sea lion at Benjamin Island north of Juneau. The letter F indicates the animal was branded as a pup at the Forrester Island complex in very southern Southeast Alaska - part of the Alaska Maritime National Wildlife Refuge,

In Alaska, researchers have marked a number of Steller sea lions for similar purposes. Some animals have been equipped with GPS tracking devices that provide far more information and don’t require re-sighting.

Males migrate those long distances from the colonies during the winter whereas females and juveniles remain close the breeding areas.