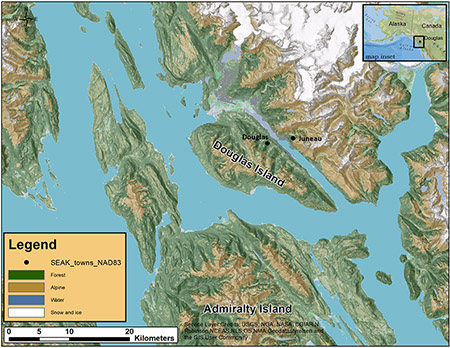 Douglas Island is adjacent to mainland Juneau in northern Southeast Alaska, barely separated at the narrowest region by a tidal wetland. Crupi lives on the island and works there in the town of Douglas at the Southeast regional office of the Alaska Department of Fish and Game.

The 2017 bear was shot in the early morning hours by a concerned homeowner in a defense of life and property (DLP) incident in the spring. Fish and Game biologists noted on the scene that the bear’s hide was particularly dark. By law, the skull and hide were turned in to Fish and Game. Tom Schumacher and Paul Converse and conducted the sealing. The skull was large, measuring 25 ¼ inches, and the bear weighed about 700 pounds.

Bears in general stick to a home range they establish as young adults. Females in particular often establish home ranges near their birthplace, sometimes overlapping or adjacent to their mother’s home range. Some males wander, usually in spring in search of mating opportunities. Southeast Alaska presents plenty of barriers to wandering, and populations tend to be separated by fjords, icefields, glaciers and bays. The rarity of mixing means those groups show genetic distinction from each other. 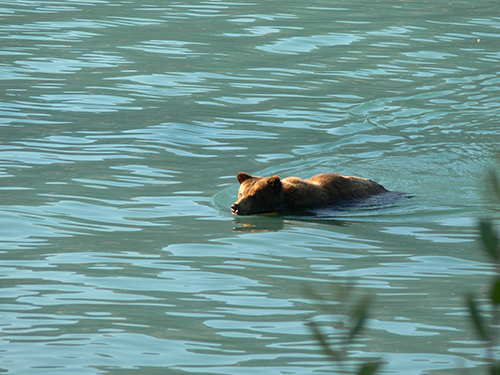 Now-retired wildlife biologist Rod Flynn conducted genetic work on bears in Southeast Alaska in the early 2000s. Tissue and hair samples from bears have been taken for more than a decade in Southeast Alaska, from every bear ever captured for a research project and from bears taken by hunters. Hunters are required to bring the hide and skull of their harvested bear into a Fish and Game office (or a representative) for “sealing” – a seal is affixed to the hide. In Douglas, biologists and technicians such as Chad Rice, Paul Converse, Stephanie Sell Carl Koch and Roy Churchwell ask a few questions and gather data about the bear and the hunt effort and area – information that is used for bear management and research. A small tooth is pulled to age the bear, and those tissue samples are taken.

As a result, Crupi and his colleagues have thousands of genetic samples from bears across Southeast. Genetics proved to be the key to identifying the source of the wayward brown bear. Crupi had a sample from the bear analyzed and he compared it to the suite of samples from the region. 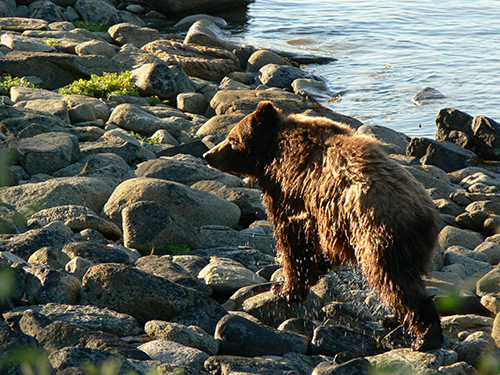 A 4-yr old female bear shakes off on the beach after crossing Lynn Canal, near Haines. Etta Meeks photo

“When we analyze genetic data I can tell what population a sample is from based on its characteristics,” Crupi said. “It was clear that the brown bear harvested on Douglas had the makeup of an Admiralty Island bear and does not share the characteristics of the mainland population around Juneau.”

The west side of Douglas Island faces Admiralty Island across Stephens Passage. It’s about five kilometers (three miles) across, but a couple spots narrow to under four kilometers, just about two miles, notably from Point Young on Admiralty to Point Hilda on Douglas. It’s a respectable reach to bear-paddle, but brown bears are known to swim that kind of distance, especially males.

Researchers looking at brown bear dispersal and genetic exchange between populations in Interior and Coastal Alaska found that while brown bears will swim, female bears don’t attempt crossings as wide as male bears do. “The data from four insular populations indicate that female and male dispersal can be reduced or eliminated by water barriers of 2-4 kilometers and 7 kilometers in width, respectively.”¹

Southeast Alaska brown bear populations are divided into nine distinct ancestries, distinct from populations in the Yukon. They include a mainland population at the southern end of the Panhandle, the Taku River area south of Juneau, the Berners Bay area north of Juneau, Lynn Canal, Glacier Bay, Yakutat, and Icy Bay/Malaspina in the north. Island populations include Admiralty Island, and Chichagof/Baranof Islands. 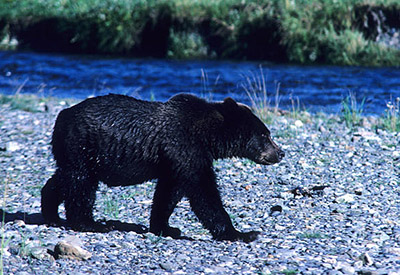 A black-colored brown bear from the Pack Creek area on Admiralty Island, photo by Doug Larsen.

“Admiralty and Chichagof have different population structures, as it’s a bit too far to swim,” Crupi said. “Not to say it could never happen. But Baranof and Chichagof are so close that the genetics are similar, it’s one big population.”

At the northern end of Southeast Alaska, Yakutat Bay significantly separates the Yakutat Forelands from the Malaspina Glacier area to the northwest. Crupi and fellow bear researcher LaVern Beier collared and tracked more than 100 bears in the area for several years.

“Malaspina bear genetics are distinct from the Yakutat side, they are not showing a lot of mixed ancestry,” Crupi said. “You can tell them apart.”

Crupi noted that one GPS collared Yakutat area brown bear undertook a notable walkabout a few years ago – one that also required a swim. The GPS points showed that the bear chose a relatively narrow passage about three miles wide to make the crossing.

“One bear swam across Yakutat Bay to the Malaspina side and spent a couple months there in June and July, then returned,” he said. That bear was collared with a GPS tracking collar that enabled researchers to track his movements (see link at the end of this article). 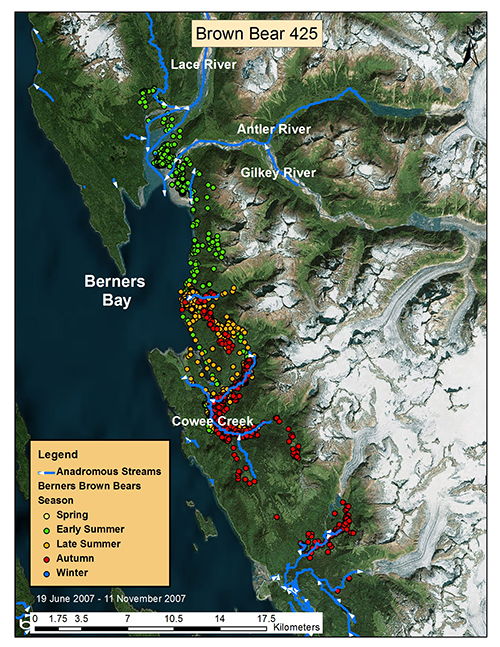 In 2007, a brown bear collared in the Berners Bay area (about 50 miles north of Juneau) was found to also have Admiralty Island bear genetics. Crupi said when the bear was collared, and samples and measurements were taken, biologists noticed it did not look like the typical Berners Bay brown bear.

“We noted in the field it was particularly dark, strikingly different looking from other animals that had been captured in Berners Bay,” he said. “The samples came back and showed shared ancestry with the Admiralty population. He was most likely a first-generation immigrant.”

That bear showed a characteristic of the Admiralty Island bear population - the presence of polar bear-like genetic material (mtDNA haplotypes). Biologists have hypothesized that during the ice age, 80,000 to 20,000 years ago, when the polar ice caps extended seasonally down to the outer coast of Southeast Alaska, polar bears interbred with brown bears. This is true of the Baranof/Chichagof bears as well, but not mainland bears.

That 9-year-old Berners Bay bear, identified as Male #425, was collared on June 19, 2007. He spent the early part of the summer in the Berners Bay area, then traveled south toward Juneau. As summer progressed he spent most of his time on salmon streams like Sawmill Creek at the south end of Berners Bay, and Cowee Creek at the north end of the Juneau road system, about 40 miles north of town. He spent autumn on Cowee Creek and then in October he moved a dozen miles further south to the Eagle River. He denned for the winter around Nov. 11 above Eagle Glacier Lake. 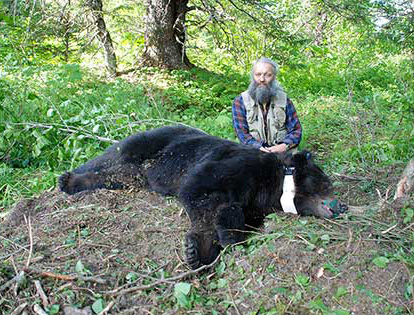 Biologists estimated he had a home range of 80 mi2 (209 km2). The movements of GPS and radio collared bears in Southeast Alaska has provided insights into the size of brown bear home ranges in Southeast. Because Admiralty Island is prime brown bear habitat, a relatively small home serves, and a number of bears have overlapping home ranges.

Admiralty bears tend to be darker than the average brown bear. Some are downright black. Berners Bay brown bears have members that are very light colored, blonde, and greyish. Black bears also range in color, and some black bears in northern Southeast known as glacier bears are a distinct bluish-grey color. Crupi is interested in coat color variation in both black and brown bears and is collaborating with other researchers to learn more. 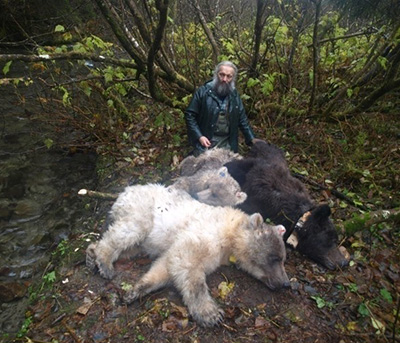 LaVern Beier with a mother brown bear and her two almost-grown cubs, showing a couple of different coat colors in two cubs of the same litter.

“What makes glacier bears have that coat color, and why do some black bears have a white blaze mark on their chest,” he asked. Biologists are collecting hair samples and photographs of bears and hope to identify the genetic component to coat color variation.

Stable isotopes – you are what you eat

The hair and tissue samples from bears have also been analyzed for stable isotopes, which offer clues to an animal’s diet. Carbon and nitrogen in particular reveal ratios of plants and meat in a diet, and whether food was derived from terrestrial or marine sources. By comparing bear tissue samples to samples from specific food items, biologists can tell, for example, the proportion of salmon, moose, and plants in a bear’s diet.

“One thing that’s coming up is that the signature between black bears and brown bears is very distinct – brown bears have a much higher amount of salmon in their diet, among northern Southeast Alaska bears,” Crupi said. “That’s related to their spatial distribution. In places like Yakutat or Haines where brown bears co-exist with black bears, brown bears spatially exclude black bears from those higher value resources. The black bears are eating berries, and the brown bears get the salmon.” 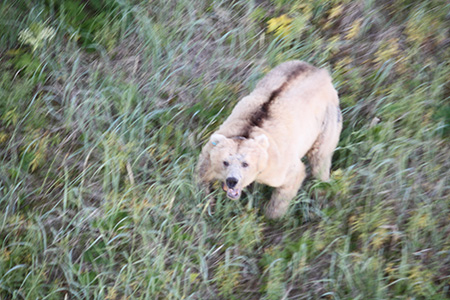 Crupi plans to look at the stable isotope characteristics of black bears in areas where black bears are the predominant species.

He is also looking at how the stable isotope characteristics of the various Southeast brown bear populations compare to each other, and how distinct they might be.

In the case of the recent Douglas Island brown bear, his stable isotope characteristics are consistent with other male bears from Admiralty Island.

Bears on the Move: Brown Bear Dispersal and Home Ranges