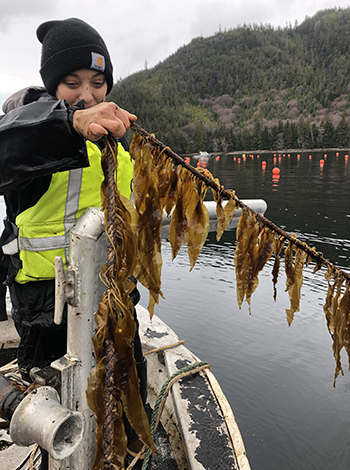 The Alaska Fisheries Development Foundation, which promotes innovation in Alaska’s commercial fishing and processing sectors, coordinated workshops for Alaska’s emerging kelp farming industry in February 2020. I attended a workshop in Ketchikan, and other workshops were held in Sitka and Kodiak.

Kelp farming is deliberately growing kelp from seed to harvest, which is different than simply harvesting wild kelp. The Alaska Dept. of Fish and Game Division of Commercial Fisheries oversees both wild kelp harvesting and kelp farming. The Alaska Department of Natural Resources oversees farm placement. Kelp farming is in its infancy in Alaska, with farms currently operating near Ketchikan, Craig, Kodiak and soon - Sand Point.

Wild kelp harvest for commercial use is also a new sector in the state’s commercial fishing industry and has helped stimulate interest in kelp farming. Wild kelpers in Southeast Alaska have spawned several new lines of kelp food products, including Barnacle Foods in Juneau, Simple Pleasures of Alaska in Sitka, and Foraged and Found in Ketchikan. Barnacle Foods of Juneau is already using some Alaska kelp farmed in southern Southeast AK to keep up with the demand for their products.

There are over 500 (and counting) species of seaweeds in Alaska. The three primary species currently grown are bull kelp (Nereocystis luetkeana), sugar kelp (Saccharina latissima), and ribbon (aka “winged”) kelp (Alaria marginata). These kelps are an annual crop, although some individuals may live longer. Adults reach maturity in mid-summer, and develop seed (called spores) in reproductive tissues (sori), which are darker brown and located in different parts of kelp fronds depending on the species. In bull kelp, for example, sori are at the end of their blades (the leafy part) and in winged kelp, sori are lobed tissues at the base of the blade on the stipe (like a stem). For all kelp, spores are released from the sori, are transferred via water movement, sink to attach to suitable rocks, and start growing new, microscopic forms of the kelp in the fall. These young plants continue developing over the winter and grow into adults by the following summer. 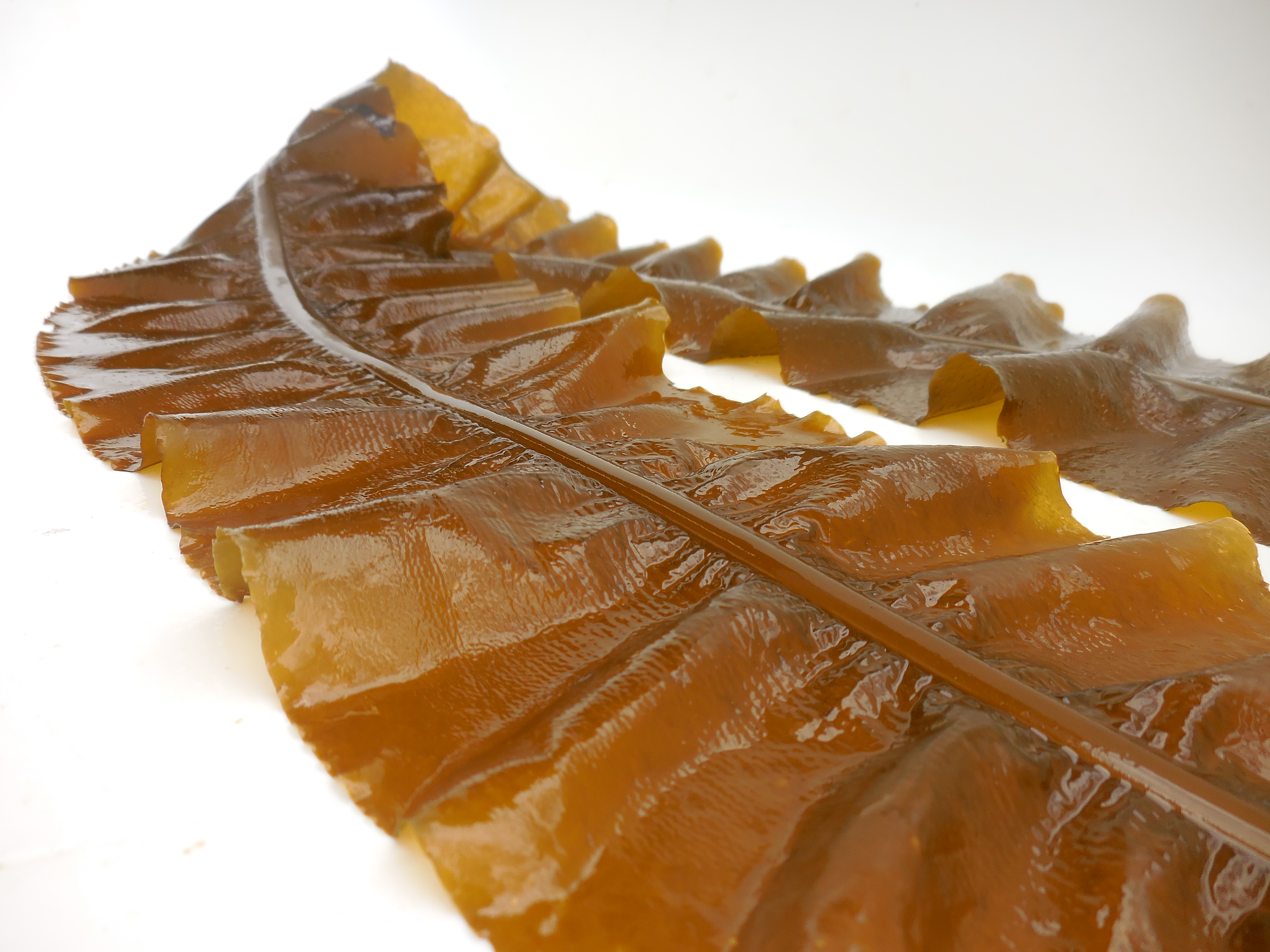 To start a kelp farm, spore material is gathered from wild adult plants in mid to late summer for further processing in a nursery facility. The dark patches on the bull kelp (below left), called a sorus (singular) or sori (plural), are the reproductive tissues that hold spores. 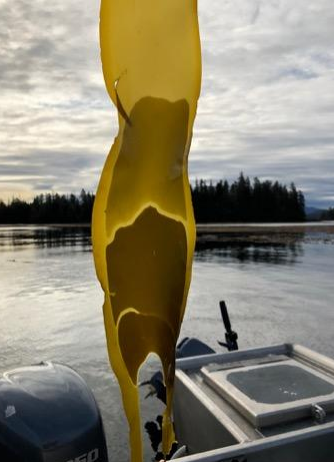 For bull kelp, just 5 or so adult kelp plants can contain enough spore material to plant a 100-acre kelp farm and produce between half a million and a million pounds of kelp! But, like the state’s salmon hatchery program, protection of wild stock kelp is of primary importance for the state’s mariculture program. To maintain genetic diversity, spores from at least 50-60 wild kelp plants are gathered within 50 km of the kelp farm each year to seed the farm so that many local individual plants contribute to the genetic makeup of the farm and any spores released from farm plants will have a diverse and relatively similar genetic makeup to local wild stocks.

The kelp sori are taken to a hatchery and prepared for an overnight round of dessication and temperature stress; the dessication and cold encourages spore release. The next day, sori are put in beakers of filtered seawater and cooled in a refrigerator, which stimulates the spores to release from the sorus into the seawater.

Once the spores release to the seawater, then comes the tricky part – getting the spores to grow on lines to adults. What do farmers use? Nothing complicated, really – a section of PVC pipe and small diameter purse seine twine. 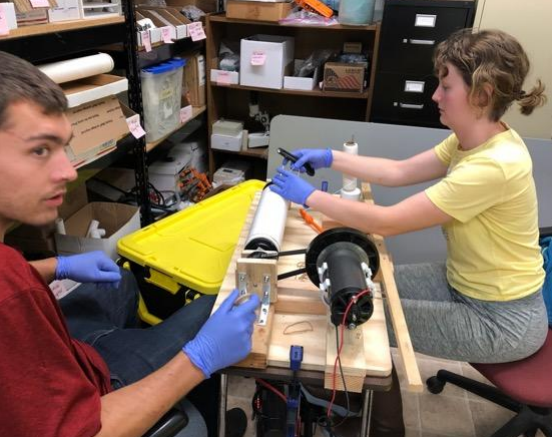 The seine twine is tightly wrapped around the PVC pipe. Twine-wrapped PVC pipe sections are put into a tank of filtered seawater, and the spores of the seaweed are introduced from the beakers into the tank for a day or two, where the spores attach to the twine on the pipe. The pipe sections are then transferred to smaller, aquarium-sized tanks, where lights are added along the sides of the tanks to promote photosynthesis to grow the new kelp seedlings. 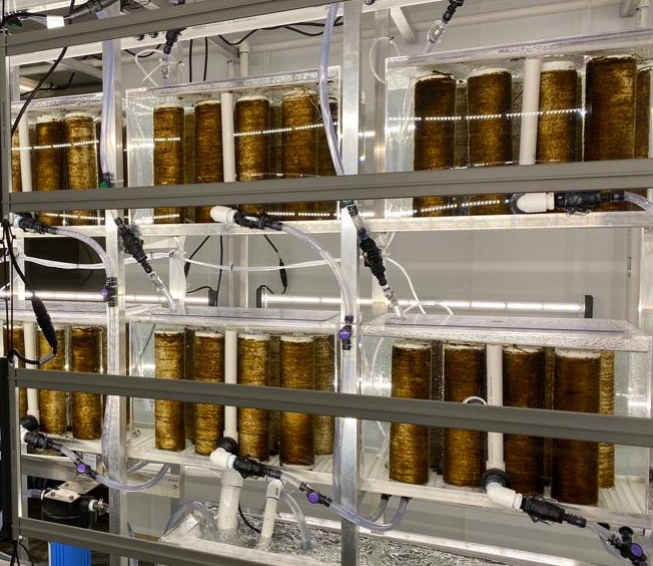 Kelp seedlings growing in tanks in the hatchery.

In four to six weeks, the twine is brown with kelp. The seedlines are then transported from the hatchery to the farm in a tote of seawater for outplanting during September through November for the grow-out phase of production.

After the kelp workshop, I traveled to Craig, where I met up with Markos Scheer (below, transporting kelp seedlings to the grow site) and Tiffany Stephens, two of the workshop attendees. Markos owns perhaps the largest kelp farm on this side of the North Pacific near Craig. Markos lived on Prince of Wales Island, where his mother was a tree thinner. He attended Hollis, Klawock and Ketchikan High schools, and graduated from Ketchikan High School. He worked for over a decade at a Ketchikan fish processor, then put himself through law school. Scheer practiced law for 20 years at several Seattle law firms. His practice involved representing seafood producers, processors and other businesses on the west coast and Alaska. His background, with knowledge of the local waters and communities, fish processing experience, and law experience to navigate the numerous legal hoops necessary to set up a mariculture farm in Alaska, proved ideal for setting up a kelp farm. Expertise in actually growing the kelp he figured he could learn after his farm was set up and ready to seed. 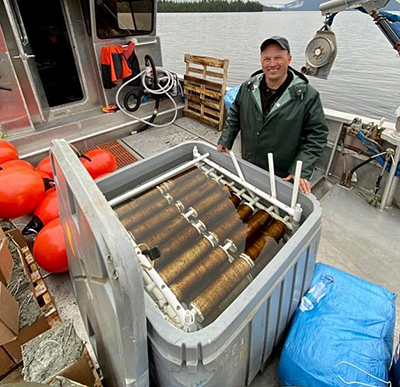 Luck was on his side. By coincidence, Tiffany Stephens, who recently completed a PhD degree that focused on kelp, happened to attend a presentation Markos delivered to the local community at the City of Craig council office. Walking into the meeting, she cheekily questioned what a former lawyer had to say about kelp. Walking out, not only was she supportive of the venture, but a year later had herself a job applying her expertise as the technical expert for the project. Also working for Markos are a number of local couples, including Zach and Jessica out of Hollis and Steven and Melyssa, a young Craig couple raised in the fishing industry who gillnet for salmon in the summer.

The farm is located in a bay in about 150 feet of water. A simplified description of the kelp farm is to visualize a football field. The sidelines are called catenary lines, which are lines floated at the surface with buoys and anchored along their lengths. These lines form the primary engineered strength and structure of the farm. It is a somewhat permanent structure that is engineered to stay in place over time. 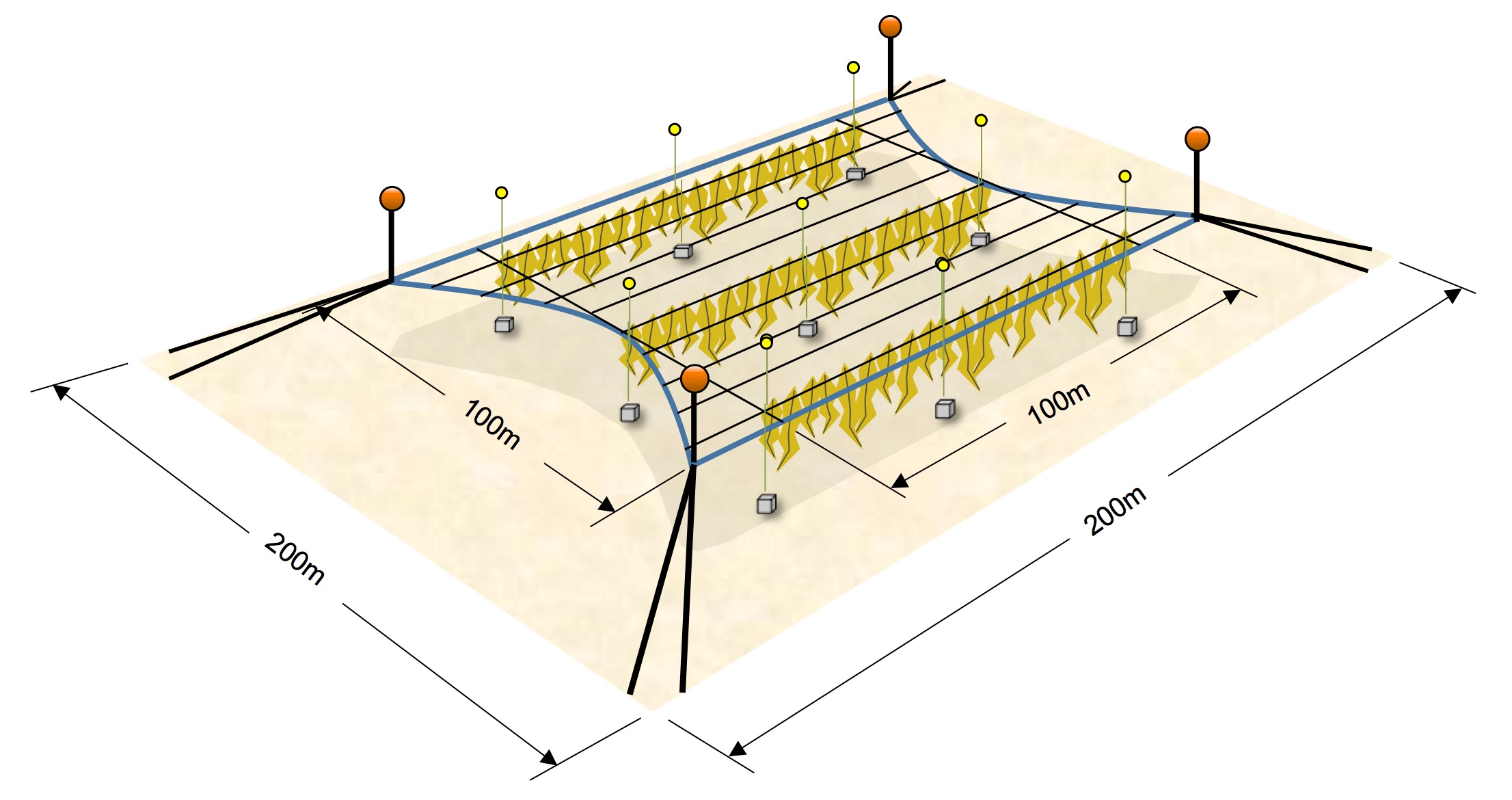 The lines that cross the football field from sideline to sideline are the kelp grow out lines. These lines attach at either end along the catenary lines. The grow out lines have both anchors and buoys attached to them along their length so that the lines stay about 10 feet below the surface. 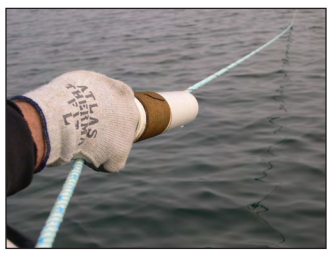 The grow out line depth is adjusted up and down with buoys and anchors, depending on the species of kelp on the line Bull kelp is a floating kelp, so as the kelp grows, more anchors are needed to keep the kelp from floating to the surface to maintain good growth. Sugar and ribbon kelp are typically neutrally buoyant as they grow, so more buoyancy is not typically needed to keep the kelp in the sunlight to maintain good photosynthesis. 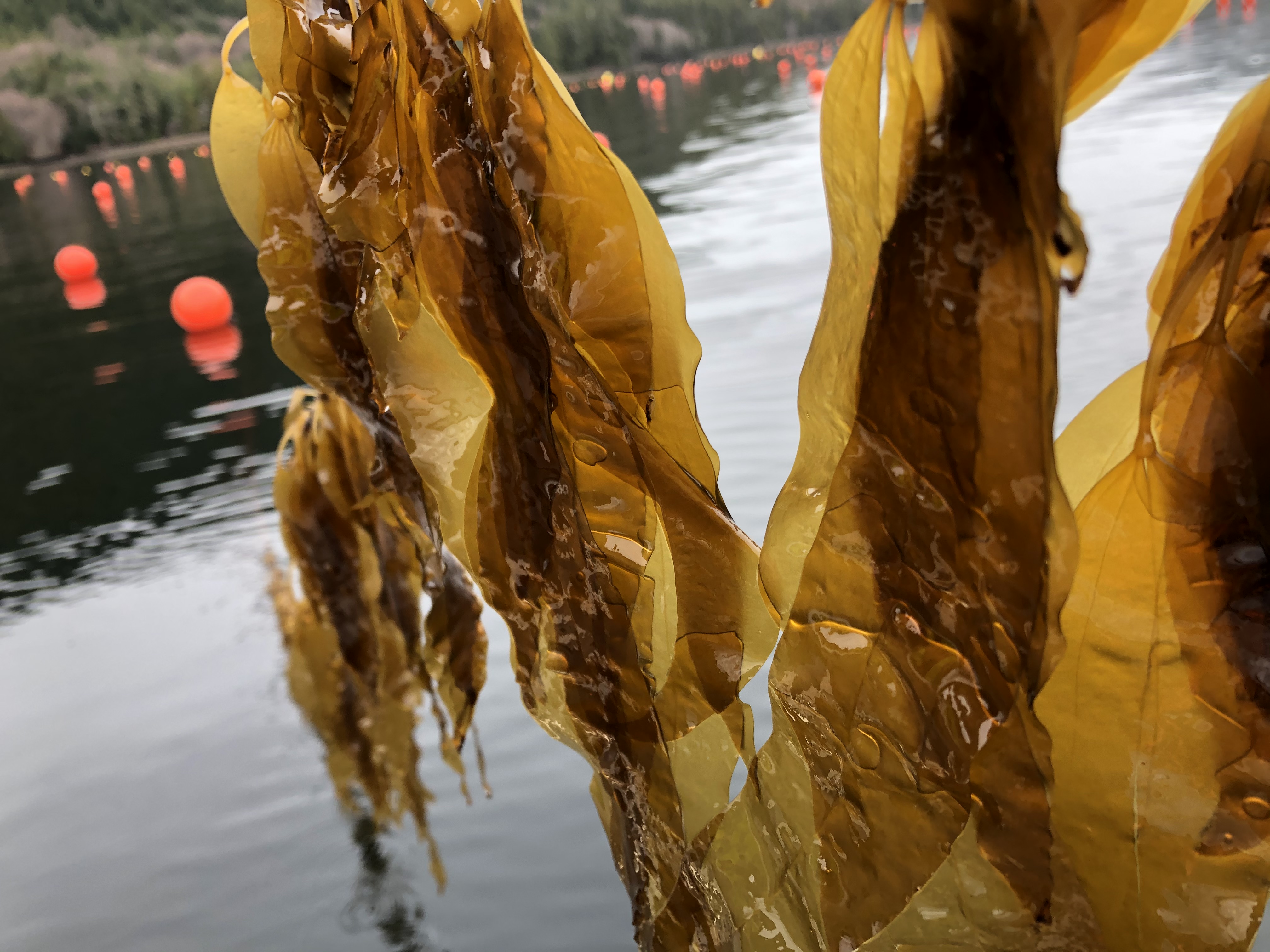 Kelp farming definitely is not a “set it and forget it” enterprise. Most kelp grows best in more exposed locations. Kelp and farm infrastructure can be damaged in strong winds and big seas, which are most common during the winter months the kelp is growing. The farm requires regular monitoring to tighten grow out lines, adjust grow out line depth, and remove trees or other debris snagged on the lines in order to maintain the farm’s engineered structure.

The large volume of kelp expected from the Craig farm - which Scheer expects could be around a million pounds once he gets the kinks worked out - will require cooperation from local fish processors to process the production. The timing of the kelp harvest in May is ideal as it occurs just before large volumes of salmon start arriving at the plants in early July, and thus will extend plant operations and employment.

Kelp farming is not yet like commercial fishing, however. Fishermen sell their fish to the processor, who then sells processed products to vendors. Scheer has arranged for local fish plants to process his product, but not to sell it. That will be his responsibility. 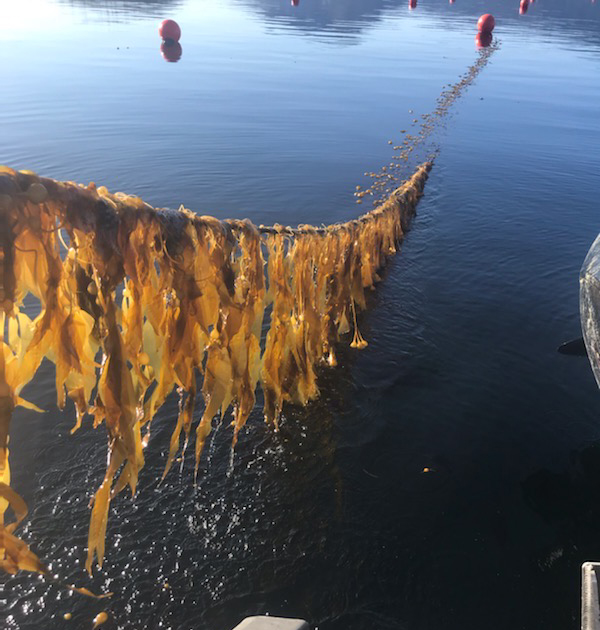 Kelp is used in many products, including directly as food in dried and fresh forms, as thickeners for ice cream, as teas, energy bars, cosmetics, biofuel, fertilizers and even disposable cups and food packaging. Scheer is out exploring all these markets but as he told me, you can’t sell something you don’t have yet.

Alaska’s pioneer kelp farmers are forming the nexus of a new industry for the state alongside Alaskan manufacturers already making great kelp products. It’s an exciting clean, “green” industry getting off the ground across coastal Alaska. The industry will rely largely on the boats, equipment, and processing capacity already in place, and enhance employment opportunities in the growing, processing, product development and retail sales sectors for Alaska-grown marine products.