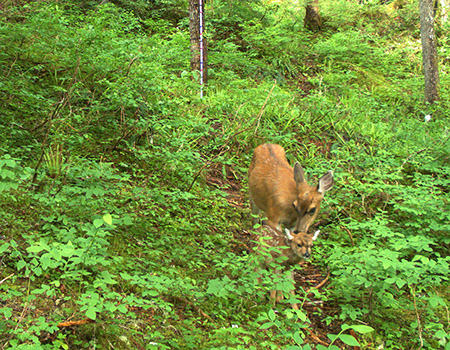 A Mitkof Island doe with a young fawn, photographed with a trail camera as part of deer research.

More than sixty game cameras are capturing thousands of photographs of the animals that wander some remote spots on Mitkof Island in Southeast Alaska. The cameras, in four groups of 16, are part of a multi-year study underway to better understand the number of deer on the island.

On a soggy September morning, rainfall from the previous night cascades into a rock pit on a logging road on the central part of the island south of Petersburg. Dan Eacker, the Alaska Department of Fish and Game’s deer biologist for Southeast, digs out some gear from the back of his truck before heading out to check a nearby cluster of cameras.

“There’s 16 cameras in a cluster and they’re over a square kilometer,” Eacker said. “So they’re about 330 meters apart basically.”

Mapped out on a square-kilometer grid, the 16 cameras would be exactly positioned “on paper.” The method allows for some adjustments in the field when placing the cameras.

“You get to the site and it’s not a good spot, and there’s a better spot 30 meters away, like a nice tree right on a game trail,” Eacker said. “I try to follow the layout, while maximizing detection of deer.” 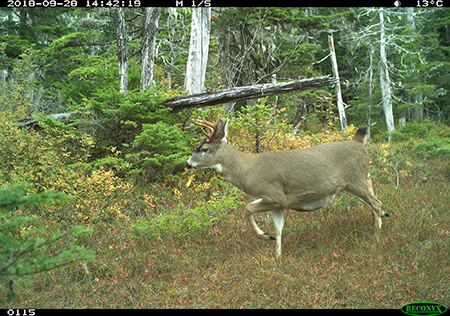 These game cameras are off the beaten track so they’re not getting many photographs of people. And they’re not easy to find, even for Eacker, who installed them last fall. Eacker uses a GPS and compass to pinpoint his spots. One camera is down a steep timbered slope thick with blueberry bushes and downed trees.

The thick timber is the main reason these deer are so hard to count. But the remote game cameras record images of the animals, day or night throughout the year. After a little walking we find one.

Eacker unlocks the camera housing, cleans out spiders and debris and swaps out memory cards. Each of the cameras has several hundred photos recorded since his last visit in the spring.

This array of cameras is one of four camera-clusters spread around the island and he’ll swap out memory cards on all 64 during this visit. He also makes sure each camera sightline is clear of brush.

“We went through like 51,000 camera pictures from this last round,” he said. “And these cameras are really good too. You could see I’m always trying to clear the brush or anything that could be an obstruction to the camera. The last thing you want is a branch moving in the wind and setting off your camera ten thousand times. And it also just kind of kills your battery as well.”

Past methods of counting give a more general sense of trends in the population - whether deer numbers are rising or falling. Those methods include aerial surveys done on other nearby islands along with surveys of deer droppings.

Since the 1980s, biologists have counted pellet groups along established transect lines set up throughout Southeast Alaska. Changes over the years in the number of pellet groups counted along a transect provide insight into population trends in that area, but not actual population numbers.

Eacker has also set up deer pellet transects, but this study includes now taking DNA samples from those deer droppings to get information on the population. Last winter he collected more than 200 samples.

“We are identifying individual deer through their DNA,” he said.

This is a relatively new technique, based on amplifying low-quality DNA gleaned from the surface of the deer pellet. Eacker explained that cells are sloughed off the walls of the intestines as the deer pellet passes through the digestive tract.

“In the past, we weren’t able to work with low-quality DNA,” he said. “A blood sample is probably the best source of DNA, and hair – the hair follicle.”

Eacker worked with hair samples in a past study of grizzly bears in Montana, and the researchers discovered a surprising insight into that population. “We found out there were three times as many grizzly bears there than previously thought,” he said.

That project and the Mitkof Island deer study use a method known as mark-recapture to estimate the population size. Originally, animals were live-captured, physically marked in some way, and released; later trapping efforts captured new animals and recaptured some of the marked animals. A statistical analysis of the ratios allows for an estimate of the overall population size. The same method applies today, but there’s no need to handle or physically mark the animals. The DNA sample allows a biologist to identify individual animals (the mark) and then subsequent samples represent the recapture. 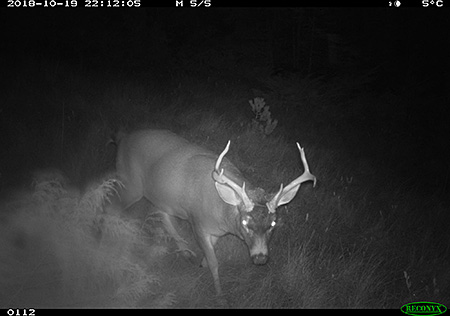 The DNA sample also reveals the gender of the animal. Eacker said as DNA technology keeps advancing, the cost to analyze each sample comes down and the efficiency improves. The results are also returned more quickly.

“The turnaround has been great, in the past we’ve waited more than a year for results, this lab at the University of Idaho has done a great job,” he said. “Of the 221 samples, 88 percent were successfully amplified. That’s really good - in past studies we’ve seen around 20 percent success.”

The lab said this is one of the highest amplification success rates they’ve ever seen for fecal samples.

Low success means backup samples must be tested, driving up the cost of the study. In this project, each sample tested costs $60. Because of the high success rate, Eacker said the study is running under budget. Part of the success is attributable to the care taken with the pellet samples. Those cells on the pellet surface - and their DNA – degrade pretty quickly, depending on moisture and temperature.

The DNA information makes the camera information more useful, and the two data streams are integrated. Although the DNA provides gender, it doesn’t indicate the age of the animal. The pictures help with that, and enable an estimation of the ratio of bucks, does and fawns – the age structure of the population. In many cases, distinctive antler configuration makes it possible to identify individual bucks in the photographs.

This winter, Eacker will be gathering more samples as deer move on to their winter range at lower elevations. The 64 cameras will be working as well. He also plans to capture and fit 20 deer with GPS collars next year. That will add to the information on how far deer move and the size of their activity area, often referred to as home range.

The deer in the study areas are representative of the entire Mitkof Island population, and the data can be extrapolated to provide an island-wide population estimate. Biologists will also be able to look at population trends over time. 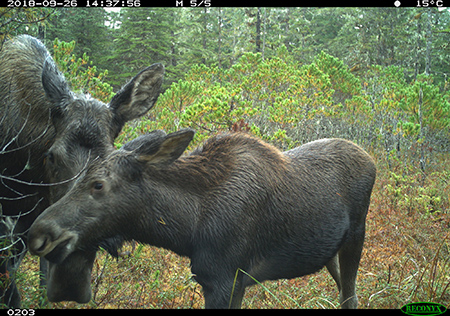 Eacker has captured photos of many deer, along with moose, porcupine, marten, wolves, black bear and brown bear. He also has a photo of a wolverine from the Woodpecker Cove area on the southwestern end of the island. But it’s the deer photos he’ll be using to provide more reliable information about deer abundance on Mitkof.

A more reliable population count could be used in future management decisions for the old growth forest that deer rely on for shelter in snowy winters, or in future decisions on hunting seasons in the area. The main land manager on the island, the U.S. Forest Service, bases its decisions on logging and other development on a theoretical number of deer that the forest could sustain. And past hunting season decisions have been based on overall indices of abundance in the area, not actual estimates of deer population size.

After recovering eight of the camera cards, Eacker makes a quick stop at Petersburg’s gun range to sift through some of the photos from the past spring and summer. The population study continues into 2020.

Joe Viechnicki is a Petersburg-based journalist and this first aired as a radio news broadcast in September 2019. This is reprinted with permission from the KFSK website. Riley Woodford contributed additional information.