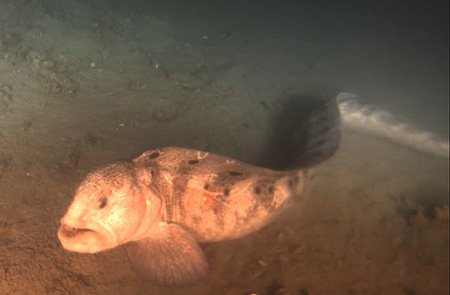 State fishery biologists Kellii Wood and Erica Ebert, based in Petersburg, captured the video as they conducted surveys of yelloweye rockfish in the waters off the coast of Southeast Alaska. A Remotely Operated Vehicle, equipped with lights, a belly camera and two forward stereo cameras, provides the bottom-fish-eye-view as it cruises just above the seafloor. On the surface, an Alaska Department of Fish and Game research vessel carefully matches the pace and route of the ROV, connected by a 200-meter cable.

Dives are typically between 60 and 180 meters, and no deeper than 200 meters. A single dive lasts about 45 minutes and covers a one-kilometer transect. The survey team also includes an ROV driver and a navigator. The team lives aboard the research vessel for a week or two during the yelloweye rockfish surveys. They conducted about 30 dives in the spring of 2018 and about 70 dives in a two-week period in August of 2018. Surveys take place throughout the outside waters off the Southeast coast, and in the Fairweather grounds and the waters near Yakutat. 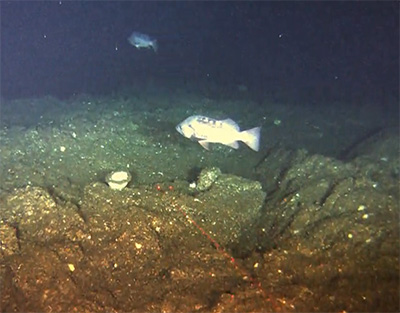 A rockfish near the seafloor. The laser points can be seen in the center of the picture - these help biologists estimate the size of fish.

“We don’t go any farther than 200 nautical miles offshore, because we can’t go any deeper than 200 meters,” said Wood. “Typically we still see land.”

Biologists Ebert and Wood explained that yelloweye is the predominant species that is harvested, one of seven demersal shelf rockfish species that Fish and Game is monitoring in the commercial, sport and subsistence fisheries. Demersal refers to the area just above the seafloor, in this case the continental shelf.

“Our primary focus is yelloweye, we produce a biomass estimate for that species,” Wood said. The estimate is produced in order to determine if a commercial fishery is warranted in a given area. “We are also collecting data on other demersal shelf rockfish: rosethorn, quillback, tiger, China, canary, and copper. We are also taking the length of lingcod if we see them, and halibut and black rockfish.”

Although rockfish are the focus, biologists keep an eye out for other interesting species. Wood said they recently spotted a king salmon at 180 meters, surprisingly deep. Octopus are always a favorite.

“We’ve had halibut hit the vehicle,” Wood said. “We’ve seen lingcod attack halibut, like a gang of three cod attacking a halibut and chasing it away.”

Yelloweye are one of the largest of the rockfish, growing to 36 inches. They are known to live as long as 120 years. Rosethorn and quillback are the most abundant species. Rockfish are caught commercially, and are also popular with charter anglers and resident sport anglers. 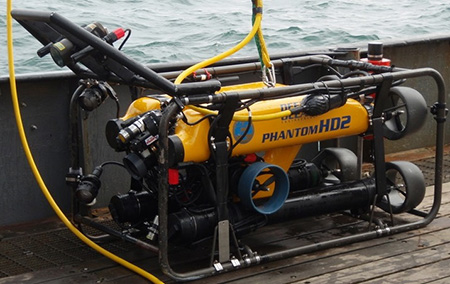 Buttercup, the ROV, on deck.

Biologists have nicknamed the submersible ROV Buttercup. Mike Byerly, an ADF&G fishery biologist based in Homer, drives the vehicle. His colleague, GIS analyst Josh Mumm, navigates to make sure the vehicle follows the appropriate transect course for each survey.

Buttercup weighs between 250 and 300 pounds, and is about a meter-and-a-half long, and three-quarters of a meter high and wide. The ROV is equipped with horizontal thrusters fore and aft, to propel it forward and steer it, reverse thrusters, vertical thrusters, and lateral thrusters that can “slide” the vehicle sideways. Byerly uses joysticks to operate the vehicle. A 400-pound lead weight is attached to reduce the effects of current, stabilize the ROV, and help keep it underneath the vessel on the surface.

The ROV is based in Homer with Byerly and Mumm, and also operates in the Homer region. Byerly said Buttercup is also useful on dry land to local science students.

“We do outreach with school groups, and we show them the ROV out of the water,” he said. “We’ve done sampling exercises in schools, demonstrating on the gym floor how surveys are done.”

At sea, a survey transect is created within the study area, and the ROV is lowered overboard. As navigator, Mumm is attuned to the intended direction of travel and where the research vessel is in relation to the ROV; also the ocean currents, the terrain of the seafloor (sandy, or littered with boulders and rocks) and the visibility. 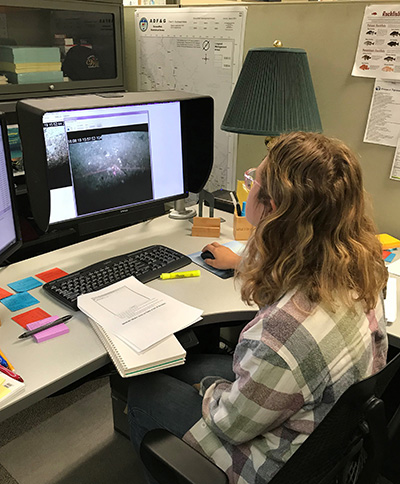 “Josh tells us the direction of the current, and we chose a travel path that minimizes problems, like going with the current,” Wood said. “The ROV can’t handle too much current. Sometimes strong current can pull it off the transect line, and we’ve had to abort dives in the past.”

“We bring all this video data back to the office,” Wood said. “When we get back, I go through each dive, count the number of fish of each species, the length, and we take point location for the other demersal shelf rockfish.”

Wood will also note if there are any uncommon or large fish species (sablefish, Pacific cod, other large rockfish) that are easy to identify.

“For quality control we go through the video to make sure the ROV was moving at a steady pace, and the visibility is good,” Ebert said. “We look at the belly camera footage, and make sure we’ve got everything. If a section of video isn’t good for more than five seconds, we’ll cut it out; we’re correcting to make sure we’re not using bad data.” 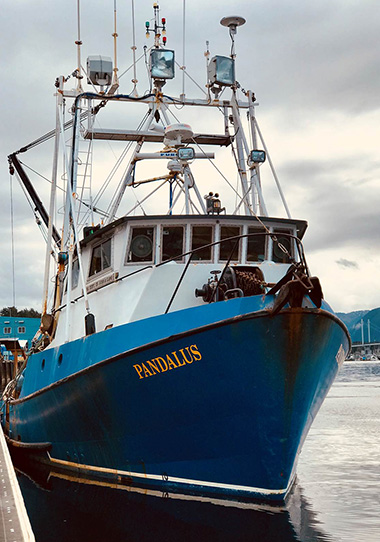 Statistical analysis of the data from each one-kilometer transect helps biologists estimate yelloweye rockfish density. This, when multiplied by the average weight of yelloweye rockfish from fishery data, and by the estimated area of yelloweye habitat, results in a yelloweye biomass estimate for that particular management area. Biomass estimates are shared with federal fishery biologists at the North Pacific Fisheries Management Council, as both state and federal agencies participate in rockfish management. Stock assessments for demersal shelf rockfish are published each year, detailing population trends, harvest information, biomass estimates and other information.

Rockfish Conservation and Deepwater Release Devices (with a video)