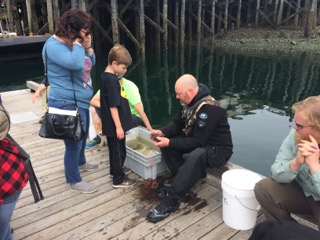 “We call it ‘Diving for Science,’” Rice explained. “It entails those guys collecting invertebrates and bringing them to a local dock for kids to see and learn about. We sort them into shrimp totes to act as touch tanks so the kids can see the critters up close and learn about their structure, habitat, what they eat, and what eats them. Jeff always also gives a short presentation about what a science diver does, what SCUBA gear they use, and then they dive in the water again to see what might be living under the docks. The kids are always really excited to watch their bubbles, and then each dive bag they bring up is like a Christmas present as we reach in to see what they’ve found.”

Last year the event was held in June and this year it will be Aug. 14.

Jeff Meucci works for Fish and Game’s Commercial Fisheries Division on the research side, and serves as the dive master on board the state research vessel Kestrel. He arranges logistics around dive operations, conducts project planning, and oversees safety drills and safety issues. Since his gear is aboard the Kestrel, which is based in Petersburg, he’s able to suit up and head down to the docks when the families arrive. 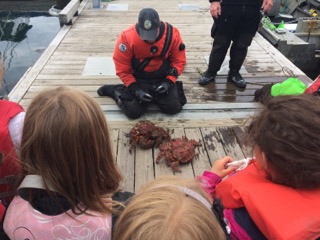 “We have totes set up, and we bring up crabs, star fish, urchins - one year we found an octopus sleeping under a piece and plywood and brought him up,” he said. “They loved that, everyone loves octopus. Sometimes we bring up garbage, and talk about that. I talk about what we do; some kids are more interested in what we bring up, but some kids are fascinated by how we dive, with tanks of compressed gasses strapped to our backs.”

He said some kids are familiar with sea cucumbers, as Petersburg has a sea cucumber fishery and during the fall and winter sea cucumbers are processed in town.

“One thing I stress to the kids is life jackets,” he said. “If you fall overboard you better have a life jacket on.”

Diving for Science is not the only teaching that Meucci is involved with. In mid-May, groups of students from local middle school science classes visit the research vessel. Meucci and his colleagues give them a tour of the vessel, show them the wheelhouse and operations, the dive skiffs and how they work, the air compressors and dive gear, and show them how they suit up for a dive. 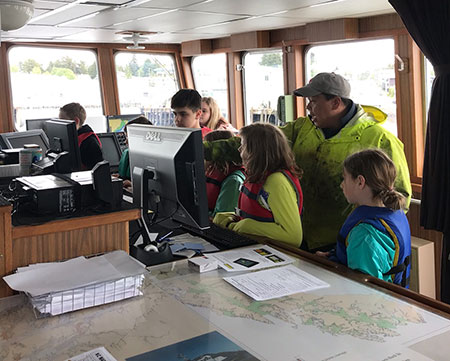 Aboard the bridge of the ADF&G research vessel Kestrel.

“We show them the labs where we’re doing scientific work and weighing and measuring, so we talk about metrics,” Meucci said “We show them what life is like on the Kestrel. They see the galley. They love to see the dish sign-up sheet, they have to do dishes at home and they like that we have to take turns doing dishes, too.”

The Petersburg science students are also monitoring for invasive species in their area.

In addition to survey work involving shrimp, geoduck clams, red sea urchins, sea cucumbers, and monitoring and watching for invasive tunicates and green crabs, the Kestrel is also involved in a variety of research projects, hosting biologists with Fish and Game and outside scientists. Recently, this has included researchers studying abalone and starfish wasting disease.

Meucci is looking forward to working with three new divers this year. He said all three women are enthusiastic and will be great additions to the Kestrel and the ADF&G dive program.