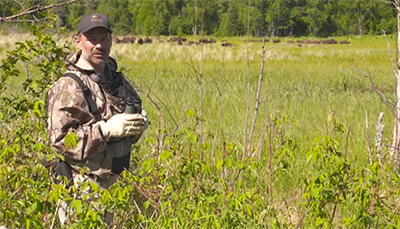 Alaska’s only wild wood bison herd had significant losses in March and April of 2018. Wood bison decreased from an estimated 140 in June of 2017 to an estimated post-calving count of 91 in June of 2018. A late winter stress event mostly attributed to difficult snow conditions took a toll on the herd.

On the bright side, that difficult time is over. Bison are again gaining weight and bringing up new calves. Bison as all other large herbivores in Alaska gain weight in the four to five month summer and then most often loose the weight over the seven to eight month long winter. The rate of decrease of their body reserves is moderated by the intake of relatively low quality winter forage they ingest, and by conserving energy doing things like limiting movement and finding shelter from severe weather.

Each animal takes a gamble in winter that it won’t run out of body reserves before the vegetation turns green again in the spring. Two of the big factors that can make large wild herbivores in Alaska lose that gamble are a late spring and deep snow. With bison specifically, snow texture is important. A bison accesses its daily food in winter by sweeping snow off the grass and sedge with its face. If the snow is very dense or has hard layers in it, bison may spend more energy and ingest less food, speeding up their decline in body reserves. Entering the winter in fall 2017, the wood bison were in excellent body condition. Throughout the winter there were few mortalities and it looked like their winter gamble was going to pay off big. However, in the last week of February it started to snow and sometimes rain at least once a week, and it didn’t stop until late April. This set up a deep, firm snow that added a high energy cost for bison to move about and to access forage under the snow. These difficult conditions (high energy output and low energy input) lasted for two months, right near the end of the winter when energy conservation is so critical. 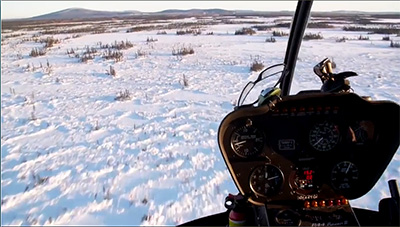 The pilot's view of the bison range in late winter.

The difficult snow conditions also added another factor of energy expense- wolves. Wolves had a major advantage during these two months because they could run on top of the snow and bison (and moose) had a very difficult time moving. As the weeks went by, the wolves got stronger from eating so well and the herbivores got weaker from the increased harassment by wolves and the lack of access to forage. It is estimated that about one-quarter of the bison deaths in spring 2018 were directly from wolf predation; harassment by wolves most likely contributed to loss of body reserves and subsequent death of others. Wolf predation is not usually a significant factor in healthy bison herds, but the special snow conditions set up an advantage for the wolves that was so great that wolf predation on this bison herd became significant during late winter 2018. Those special conditions also likely contributed to early wolf predation in this released bison population. Based on data from Canada’s reintroduced wood bison herds, it usually takes decades before wolves start to prey on the bison. It is thought that the snow conditions in spring 2018 turned the tables so much in favor of the wolves that predation was able to get started much sooner than usual. 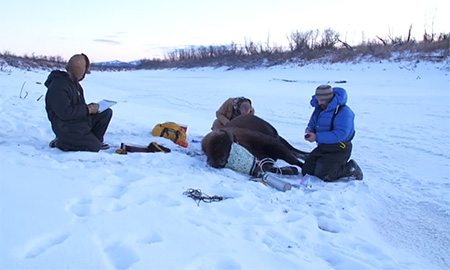 As the deep, firm snow and cold winter weather extended into April, calving season started. For many of the pregnant cows that were experiencing a negative energy budget with little reserves left, the act of giving birth required more energy than they could spare and they succumbed too.

The wood bison rebounded fast as soon as the vegetation turned green again in May. By mid-June it was hard to see the effects of the late winter as the remaining animal’s body condition had recovered so well.

Each trial in life is not without its positive side. The bison that remain are the bison that can handle a difficult winter event such as this. Most wood bison did survive the event, and some even successfully brought off healthy calves (11 new calves as of late June). Future generations of bison in the Innoko area will be built on these 91 wood bison that have the strength and skills to weather this sort of event. How common is this event? The Innoko river basin is known to sometimes get deep snow, and that was a concern before the wood bison were released. We can look to other animals to better understand the uniqueness of this year. Game Management Unit (GMU) 21E moose, GMU 19E moose, and the Farewell plains bison herd all had the lowest reproduction they’ve experienced in 20 years this spring. This suggests that whatever specific factor about the winter was so difficult for all these species, it rarely gets this bad.

Wood bison are still learning their range. In the year after the 2015 release, the wild wood bison herd split into a northern and a southern group. The southern group fared much better in this late winter stress event, presumably because they have discovered a local area where we see lower snow depths than surrounding areas. This is an example of how wood bison are still exploring and learning their range. As the years go by, they will get better and better at it. If luck is with them and the weather is in their favor, they will someday prosper to a larger population and thereby be much more capable to withstand catastrophic snow events. 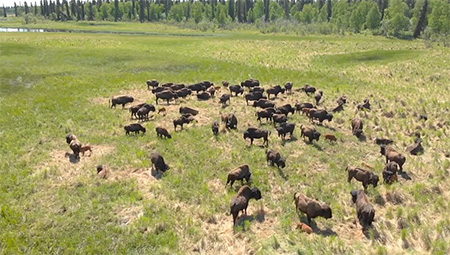 A group of wood bison. Note the smaller reddish calves in the group.

Wood bison are resilient and this experimental population still has plenty of bison to succeed in establishing a long term stable population. Perhaps the natural selection and the experience developed through this tough late winter stress event will help the nation’s only wild wood bison herd in its fight for survival. Though we all want to see the wood bison herd increase in number each year (linear growth), this is not always the path of a new population. We know from other bison herds in Alaska that populations can dip, possibly several times, before growing significantly. But we also know that bison herds in Alaska have been resilient and persistent, and ultimately, successful, and that Spring 2018 is just one chapter in a long story for wood bison in Alaska.

We knew that the chance of deep snow winter events was possible in the Innoko area, but due to perceived conflicts with oil and gas development (because of the Endangered Species Act listing of wood bison) wood bison were released in the lower Innoko/Yukon Rivers area instead of Yukon flats or Minto flats. Alaska still holds vast amounts of wood bison habitat and surplus wood bison are still available in Canada. The Alaska Department of Fish and Game will soon start a public planning process to explore the concept of more releases in other parts of the state, continuing the effort toward restoring this valuable species. 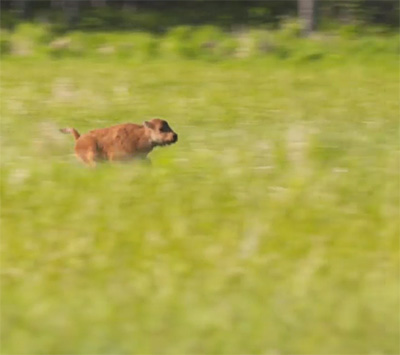 A wood bison calf runs through the sedges near the Innoko River.

Why report the loss in July? During the difficult, late winter period, bison were in small groups spread across the landscape and there was no way to estimate the extent of loss in the population. In June the bison group together for pre-rut behaviors which allowed a population estimate. It is possible, but unlikely, that more bison are still alive, but not counted in the 2018 estimate.

We understand the challenges we face as we try to restore a wild population of this threatened species. Recovery of a species is never easy, nor is the road to success a straight line. The lower number of wood bison that were counted is a concern, but not a signal that the program is unsuccessful.

Tom Seaton is a pilot and wildlife biologist with the Division of Wildlife Conservation, based in Fairbanks. He is the project leader for the wood bison restoration project.