Round Island: Wildlife Viewing At Its Best 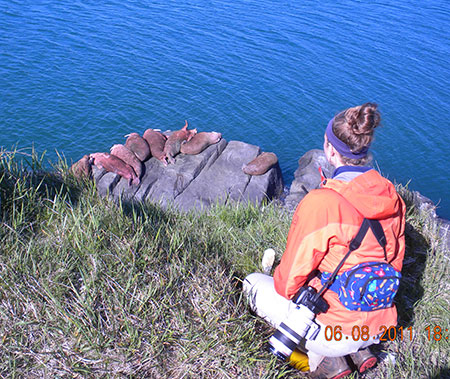 Viewing walrus at Round Island.

Situated precariously on a steep rise above sea cliffs, I paused to take in the grandeur that lay before me. My hiking boots faced out toward the ocean, spread wide on the narrow trail, as a persistent wind swirled loose bits of my hair around in tiny whirlwinds. I wiped the water from my eyes to take in the panorama as a kind of visual keepsake. To the east, the slate blue ocean expanded to meet with a lighter hue of blue sky; and to the west, another couple of humble islands stood like friends in the otherwise open ocean. I then narrowed in on the craggy peninsula several hundred yards below my feet. The land jutted out from the island like a goat’s horn, extending dramatically into the blue oblivion. It was nearly low tide, offering plenty of space to hundreds of male walrus below. Though the rocky beach offered barren parts to spread out, the walruses preferred to huddle on top of one another like football players in a tackle pile. From my position on the hill, I looked upon the commotion of leathery bodies as a single entity in constant motion. I wondered how all those tusks fit in the mess. The wind was too loud to capture the sounds on the beach, but I imagined a ruckus choir of grunts, growls and dongs. It was time to press on- to get a closer look.

The summer of 2015 marked my first time visiting Bristol Bay. I felt I had won the lottery when I was given the opportunity to visit Round Island to relieve one of the field technicians for a week. Round Island is a part of Walrus Islands State Game Sanctuary (WISGS) approximately 65 miles southwest of Dillingham. Managed by Alaska Department of Fish and Game, WISGS was established in 1960 to protect one of the largest terrestrial haulout sites in North America for Pacific walrus (Odobenus rosmarus divergens). ADF&G staffs a camp at Round Island through the summer months to protect and monitor walruses, other terrestrial and marine wildlife, and to operate a visitor use program. My job was to assist with daily walrus, sea lion, and seabird counts, among other camp duties like weed whacking the trails around the visitor tent platforms. This particular day marked my first traverse across the northern part of the island to a vantage point where you can see some of the larger aggregations of walruses from both Main Beach, and a little further up the trail, West Main Beach. It was a longer trek than some of the others and yet only a mile or so from the staff cabin. 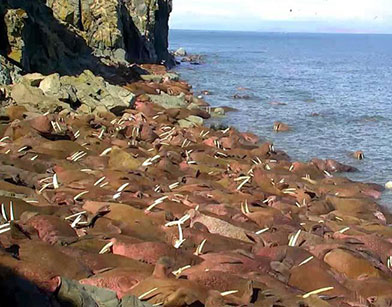 Pacific walruses spend the winter on ice in the Bering Sea. When the ice recedes in the spring, females with young migrate northward to the Chukchi Sea. Some adult males migrate to Bristol Bay where they rest on land between foraging bouts.

I crouched down to steady myself. Through binoculars I spied a closer look at the hefty creatures. They were magnificent, albeit ugly and stroppy. Some of the bigger bulls were easily 11 or 12 feet long and likely upwards of two tons. Among fin-footed pinnipeds, walruses are second in size only to elephant seals. 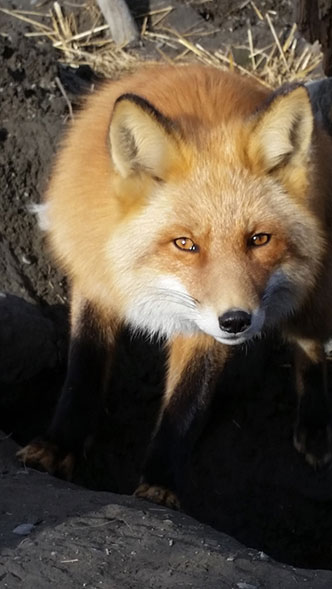 Red foxes are fairly common on Round Island.

Each individual had a different tone of skin: light pink, sunburn red, speckled charcoal. You could tell which ones had just hauled out after a long swim in the cold bay because their skin was chalky white with a hint of purple. Aside from shunting blood to their core to keep warm in the subarctic waters, a thick layer of fat sits just under the hide. Though their skin appeared tough (it can be an inch thick), many wore scars revealing evidence of a social hierarchy. Many of the walruses had raised bumps (called “bosses”) particularly around their neck and shoulders. Around their face, dozens of wiry whiskers extended a few inches outward. Walruses use their highly sensitive whiskers to search the ocean floor for food including mollusks, sea cucumbers and crabs.

While the beached bulls looked like uncoordinated ogres, those still in the water swam with grace. Gliding just under the surface of the water, the swimmers widened their flippers to propel themselves forward with surprising proficiency.

By late fall, the Walrus Islands would be void of the bustle of walruses, as the herd would be on the move once more.

Odobenus rosmarus means “tooth-walker,” named for the animal’s most distinctive feature: tusks. The upper canine teeth grow their entire life, up to three feet long. Walruses use them to defend themselves from larger predators (orcas, polar bears), to establish dominance, and to haul out on rocks and ice. I marveled at the strength of one walrus that waved its heavy tusks overhead in a smooth arc to reposition himself. Another taunted his neighbor with a quick jab as he awkwardly squirmed to a better position in the heap. Every so often the sun hit an ivory tusk at just the right angle to cast a brilliant white beam. 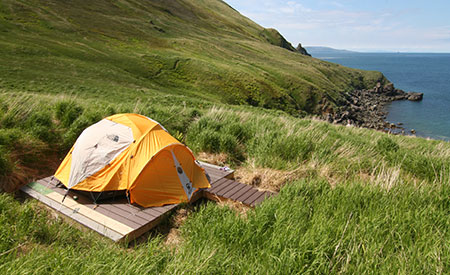 Camping on Round Island

This wild place was anything but desolate. I laughed to myself, recalling the fox kits tumbling around the staff cabin while I sipped my coffee and packed my lunch that morning. Seabirds- black-legged kittiwakes, guillemots, pelagic cormorants, and horned puffins to name a few - fluttered from their nests among the rocky cliffs, out to sea, and back again. The walruses and sea lions surrounded the island like guardians. Just how many? Since 1976, ADF&G has been sending staff to Round Island to protect wildlife resources, operate a visitor’s program, and tally wildlife. Counts of seabirds, sea lions and walruses add to a broader understanding of population trends and wildlife use of the area. With that, I found a flat area to sit, opened my notebook and steadied my binoculars- it was time to count.

While portions of Walrus Islands State Game Sanctuary have restricted access, visitors can apply for an Access Permit to visit Round Island from ADF&G. The goal of the permit program is to provide the public with an opportunity to view and photograph Pacific walrus and other wildlife, while minimizing impacts to these species and their habitats. Applicants are able to request their preferred five-day window between May 1st and August 15. A permit for five-days of camping is $100.00. 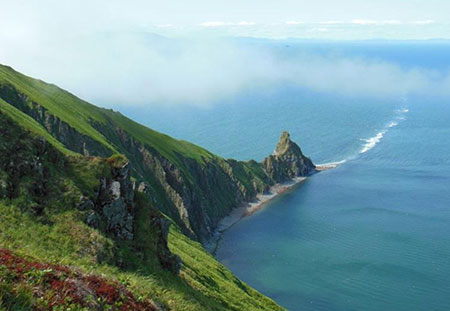 The north cape of Round Island

A visit to Round Island is one for the adventure-seeker. If low impact camping on a remote island with unpredictable weather and little to no connectivity is an issue, consider a different trip. However, if untamed beauty and an exclusive wildlife viewing experience is on your bucket list, this place is certain to deliver an experience of a lifetime.

Find out how to apply, how to get there, and what to expect during your stay.

Watch a short video of walrus in the water at the Round Island boat landing.

Watch a one-minute video of a red fox at Round Island.

Watch a golden-crowned sparrow singing on Round Island.

Sierra Doherty is an Education Specialist for the Division of Wildlife Conservation based in Palmer, Alaska.