Fish and Wildlife Management
Who Makes the Rules? 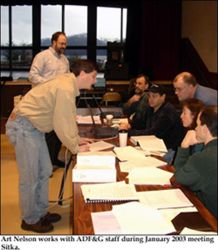 Alaska has a unique fish and game regulatory process that, perhaps more than any other state, allows for public participation in the development of regulations. This public process stems from the strong emphasis placed upon fish and wildlife resources in the Alaska State Constitution. The process involves thousands of Alaskans each year as they propose changes to the rules that govern the taking, use, and protection of the fish and wildlife in this state.

When Alaska assumed management of its fish, wildlife and aquatic plant resources in 1960, a single Board of Fisheries and Game was created to regulate the harvest of these resources. Separate Board of Fisheries and Board of Game were created in 1975. The boards are supported administratively by the Department of Fish and Game but function independently. The boards are charged with making allocative decisions, and the department is responsible for management based on those decisions.

Among all government services, resource management probably generates the widest range of public opinion and the most vociferous debate. Although Alaska’s regulatory system offers an extremely accessible forum, the effectiveness of this forum can only be assured if the public views both board members and the board process as unbiased and fair. Board members are appointed by the governor to serve every member of the public. Once appointed, they are to do their best to arrive at reasonable solutions in the best interest of the state.

The boards have a formidable task—to promulgate regulations that are reflective of the desires of varied constituencies. These myriad constituencies include trappers, sport fishermen, subsistence users, commercial fishermen, hunters, fisheries professionals, legislators, conservationists, and the fish and game resource itself. The regulations must, overall, also be based on the principles of sustained yield of the resource, priority for subsistence uses, prudent management, and enforceability.

The state’s local fish and game advisory committee system is established under the Boards of Fisheries and Game as a local forum to discuss and make recommendations on fish, wildlife, and habitat issues before each board. Members to advisory committees are nominated and seated through local elections. There are currently 81 advisory committees statewide.

The board regulatory process spans a timeframe of approximately nine months. Each board issues a “Call for Proposals” requesting changes to fisheries or wildlife regulations in specific areas of the state. This results in the submission of hundreds of proposals for consideration each year. These proposals are the tools for making changes to the fisheries and wildlife regulations in the state. Proposals are consolidated into booklets and distributed statewide for review and comment.

The Board of Fisheries meets four to six times per year to consider proposed changes to fisheries regulations around the state. The Board of Game meets two to three times per year. Each board uses the biological and socioeconomic information provided by the Department of Fish and Game, public comment received from people inside and outside of the state, and guidance from the Department of Public Safety when creating regulations that are sound and enforceable.

The biological decision is relatively simple—can this fish stock or game population withstand a harvest? If the answer is yes, the fundamental biological decision is essentially complete. Naturally, biological data is also used to analyze the effects of the different harvest strategies, identify sensitive life stages and sensitive habitat, and ensure that to the extent possible, these surpluses are taken in the most beneficial and sustainable manner.

The next step is to decide how, when and where to take the surplus. The boards are charged with making these allocation decisions. In the United States, we all expect that public policy decisions will be “fair,” and that our views will be taken into account. We expect that our government officials will hear us out, take us seriously, and treat our concerns fairly. These expectations are even more intense when the issues are related to common property resources such as fish and game.

All written comments, plus any and all oral and written public testimony taken at the board meeting or formal hearing, form the basis for decision making by the boards on any proposal. The testimony, deliberations and voting of the boards are performed in an open public forum.

After the board meetings, the adopted proposals are written into proper legal format for regulations and submitted to the Department of Law for review. Following this review and approval, the Office of the Lieutenant Governor formally files the regulations into law.

Elements affecting the regulatory process are ever-changing. The fisheries and wildlife resources are constantly in flux. A dynamic state population influences the issues considerably. Political, educational, and economic activity places emphasis on varying resource issues and stocks at any given time. The process for implementation of regulations is itself under constant review, pressured by the practicalities of accommodating such massive public input. As the sense of public ownership of the state’s resources increases, one can be assured that public input will remain an important key in regulating and managing the state’s fish and wildlife.

You may access information about board meetings, board proposals, and more on-line at: http://www.adfg.alaska.gov/index.cfm?adfg=process.main