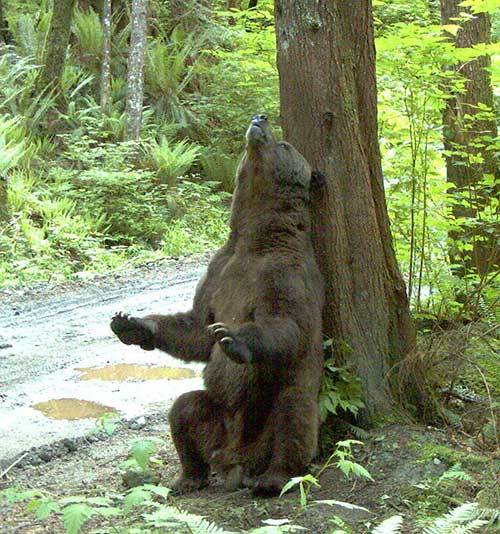 The big bear padded up to the base of the tree and carefully smelled the bark. He stood and sniffed higher up, giving it a thorough inspection. He dropped back to all fours and rubbed his head, neck and flanks against the tree, then stood and rubbed his back, right between his shoulder blades. He wasn’t scratching an itch; he was marking, leaving his own scent on the tree.

There are trees like this all over Alaska. Rub trees – bear sign posts. Most are scratched, bitten and oozing sap, loaded with hair and the bears’ wooly underfur. They are also covered in messages, invisible to us but picked up loud and clear by bears.

Researchers are studying scent communication behavior in bears, also called chemical signaling. They’re learning that bears are very deliberate about where they place scent marks, how often they engage in marking behavior, and how much time and energy they invest in scent marking. And bears behave differently depending upon whether they are male, female, adult, or sub-adult.

Motion-triggered trail cameras are an important tool for this research. “With cameras you can see the bears’ behavior at the rub tree,” said researcher Anthony Crupi. “First they investigate, they smell, and then they rub.” 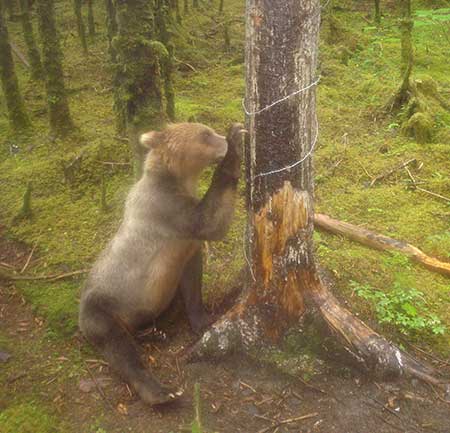 A brown bear near Yakutat in Southeast Alaska investigates a rub tree. Loops of barbed wire snag tufts of hair and fur from bears as they mark the tree, providing valuable genetic data. Scarring and scratching by marking bears is also evident on the tree, Courtesy Anthony Crupi.

State wildlife biologist Anthony Crupi has studied bears in Alaska for 16 years. In recent summers his work in the Yakutat area of northern Southeast Alaska included monitoring activity at rub trees. He also collected samples from captured and sedated bears for biologist Melanie Clapham, who is studying bears’ chemical signaling.

“When we’d take the sample the gauze would turn almost black from the oils and stuff in the bears’ fur,” he said. “It really smells like bear.”

Can a bear really smell a footprint and tell who passed by? That’s one of the questions Melanie Clapham is trying to answer. Clapham is based out of Knight Inlet, British Columbia, and is the founder and director of the nonprofit Brown Bear Research Network. As a researcher with a postdoctoral fellowship at the University of Victoria, she is looking at the chemical constituents of scent. She’s hoping to identify the pheromones used in communication and learn if the chemical constituents vary by age and gender, by season and location; and if the type of tree affects the longevity of the scent deposited.

She said it’s not yet known how much information brown bears get by smelling a track – but polar bears have enlarged sweat glands between their toes, from which males are able to determine sex and reproductive condition of scent donors. This could be similar for brown bears, especially as they are known to stomp and grind their feet into the ground on the approach to rub trees and during direct encounters. 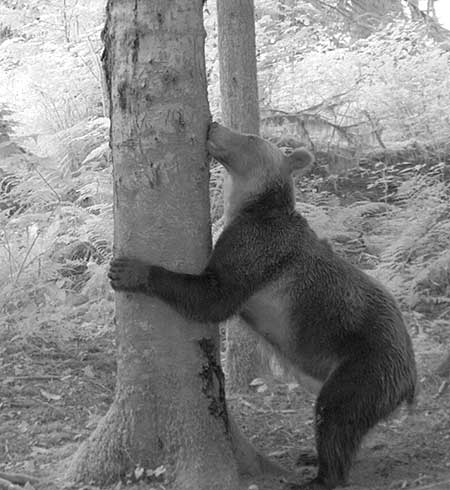 A female brown bear in British Columbia investigates - but does not mark - a rub tree. A trail camera in the infra-red night mode captures the image in black and white. Courtesy Melanie Clapham.

A male brown bear in the spring wants to know the reproductive status of his female neighbors – and the potential competition for her he might encounter from other males. According to Clapham, it does not appear that females use marking trees to advertise their availability (or estrous state) during breeding season. Adult males use marking trees to communicate dominance to other males.

Big adult males mark to communicate that they are at the top of the dominance hierarchy, Clapham explained. By doing this they are communicating lots of information about themselves to other bears - and subordinates detect these cues and modify their behavior accordingly. Clapham wrote, “We believe this helps them to gain access to females during breeding and to maintain the best fishing and feeding spots, without the need for excessive antagonistic encounters with other bears.” 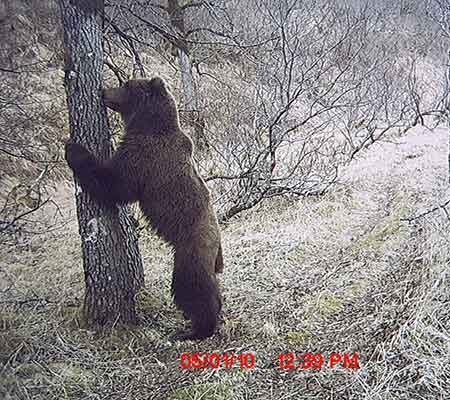 That’s consistent with what Crupi has found in Alaska. He monitored six rub trees in the Yakutat area and collected hair. Hair follicles contain DNA, which enables biologist to identify individual animals and their gender.

“We only identified males at the rub trees,” Crupi said.

There is some evidence females may use rub trees later in the season. They may not be rubbing or marking, but the cameras show that they do investigate the trees.

Since hair samples from rub trees are biased toward male bears, Crupi and his colleagues also set up hair snares, strategically placed wire hoops with strands of barbed wire that snag tufts of hair from passing bears.

“Using the hair snares, we found three times as many individual bears, and more females,” he said.

Bears select trees deliberately, based primarily on their location. Clapham said at her study site in British Columbia, about 50 bears share the same salmon river. They mark the same rub trees year after year.

“We’ve set up trail cameras on rub trees and you see deer coming up sniffing them, wolves coming up, as well as bears,” he said. “You’d think in the wild if a deer gets a whiff of a wolf or a bear they’d be gone, they’d want nothing to do with a predator. But we see a bear marking up a tree and an hour later a deer is there, smelling the tree and checking it out, sticking its head right in there, and even rubbing on the same branch.” 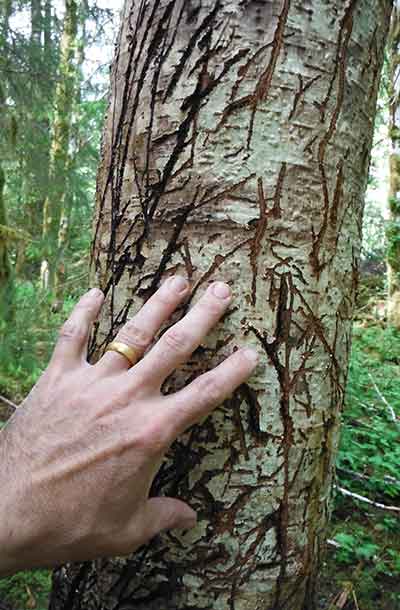 A rub tree on Prince of Wales, scratched extensively by black bears. Trees like this can be found across Alaska. Riley Woodford photo.

Porter said people overlook rub trees, but bears make a point of making them obvious. “They are very visible - bears want to let other bears know they are there.”

One give away is bite marks. “A lot of the time you see them along an edge, like the edge of a muskeg, along a bear travel corridor,” Porter said. “The bears bite them, they mark them, you can see the big canine teeth bite depressions. Whether they want the sap to come out or not, I don’t know, but it certainly brings it out. Maybe it helps hold the scent.”

Clapham suspects the bears do want the sap to ooze out.

As clawing and biting trees often releases resin, she wrote, we believe that resin could function as an additional attractant, or that the scent of a bear is able to adhere to the resin which leads to increased longevity on the tree.

A photo gallery of bears at rub trees, courtesy Kodiak Island “camera trapper” Robin Overall, is available on the Fish and Game website