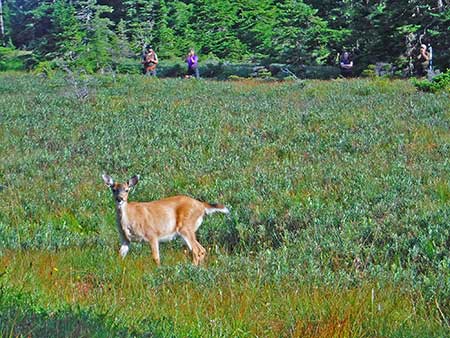 State wildlife biologist Tony Carnahan wants to better understand Sitka black-tailed deer in Prince William Sound. He’s working to learn how many deer are there and how many deer the habitat can support. This year, he and his colleagues captured 15 deer on Hawkins Island. The deer were equipped with GPS collars and released. The biologists used an ultrasound to assess their body condition, and it was good.

“The deer were extremely fat,” Carnahan said. “It will be interesting to come back in late winter and see what kind body condition they’re in – it depends on what kind of winter we get.”

Carnahan plans to recapture the deer in March and April of 2017. The ultrasound helps biologists measure the thickness of fat on the deer, and next spring they’ll also be able to determine if the does are pregnant, and how many are carrying twins (known as the twinning rate). Deer in good shape tend to have twins.

Biologists often capture animals by darting them with an immobilizing drug. For this Prince William Sound project, they used a different approach. Biologists in a helicopter captured the deer using a net gun, literally a gun that shoots a net over the deer. 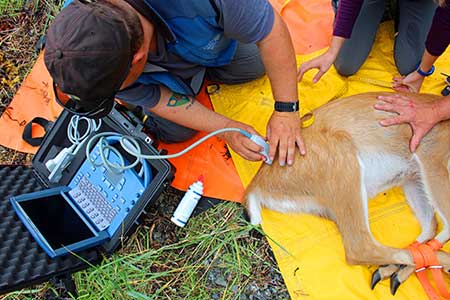 “It’s a really efficient process,” Carnahan said. “You’re not using any drugs so it’s easier on the animals.”

Carnahan plans on capturing and collaring an additional 15 deer next year on Green Island. He’s using two types of collars; one type sends him two location points each day, via satellite, and should last five or six years. The other logs a location point every three and a half hours, and stores the data in the collar, sending Carnahan a location point about once a week. This type of collar is good for about two years, and when he recovers the collar he can download all the points. Both collars have VHF transmitters that allow biologists to locate them.

The GPS information will allow biologists to create maps of the deer’s movements over time. Black-tailed deer in Alaska tend to stick to a home range, usually within a drainage. They learn where all the resources are and when they are available throughout the year. Carnahan said the collared deer will provide insights into key questions.

Sitka black-tailed deer in Prince William Sound are at the northern limit of their range. Deer moved into Southeast Alaska from the south after the ice age, as glacier receded and habitat open up. Prior to the transplant, Juneau was roughly at the northern edge of their range, which extends south through coastal British Columbia. There, they overlap with the range of their larger cousins, Columbia black-tailed deer. 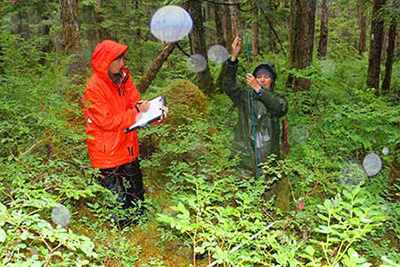 Carnahan said there are about six or seven main islands in Prince William Sound, and a number of small islands inhabited by deer. Deer thrive on the islands thanks to a maritime-influenced climate that moderates the severity of winters compared to the adjacent mainland; however there have been winters where significant die-offs occurred.

“There’s not a lot of deer on the coastal mainland,” Carnahan said. “We’re starting to see more with the lighter winters. But they get hit pretty hard by the weather on the mainland, even in a moderate winter.”

Snow was exceptionally deep in the winter of 2011 and persisted well into the spring of 2012, and Carnahan guesses it killed off close to 60 percent of the Prince William Sound deer population. Locals refer to that winter as the “snowpocalypse.” A hard, snowy winter occurs about once a decade in the sound, and the deer population fluctuates widely. A die-off followed by a few mild winters means more food is available for the surviving deer, and the population rebounds.

“The last three winters we’ve had virtually no snow,” Carnahan said. “The deer are coming back quite a bit faster than we’d expect.”

By comparing the effect of mild, moderate and severe winters on deer in the sound, and better understanding their habitat use and needs, biologists hope to create models that will help gauge population trends and the carrying capacity of the area.

Carnahan is working with graduate student Nicole DeLuca from Dr. Roman Dial’s lab at Alaska Pacific University and a team of volunteers to study the habitat. Both Green and Hawkins islands are a mosaic of old growth forest and muskeg; Green island is low-elevation and lacks alpine habitat, Hawkins has some alpine. They identified the different types of habitat on the island and created habitat maps. Then they hit the ground. They established transects and plots, identified and measured the plant species, and collected plants. 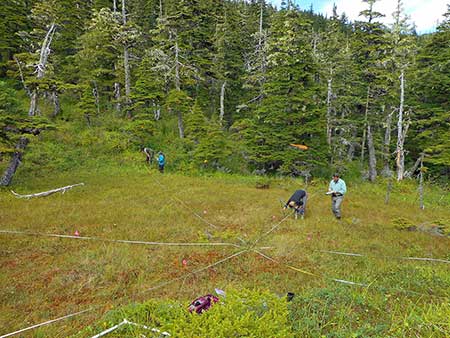 “It was fairly intensive sampling effort,” Carnahan said. “We ended up having about 1,630 hours of volunteer time.”

A sampling session involved establishing three transects, 32 meters long, and identifying and measuring each plant species along that “line.” Within those transects they picked two random one-meter-square plots, measured the vegetation, and harvested everything. They brought that back, separated the plants by species and dried them. The biomass per hectare can then be calculated.

“We actually do a nutritional analysis on the plants we bring back,” he said. “It’s not just a biomass estimate; we also look at nutrient quality of the forage.”

“We’ll look at the amount of forage that is available within each habitat type, and then use a model to calculate the number of animals that could be supported on each island.”

In 2017, in addition to more habitat sampling and captures, Carnahan plans to collect deer fecal pellets to help estimate the population. A new technique allows researchers to look at trace amounts of DNA left on the surface of deer pellets from skin cells. Researchers swab the pellets and send the swab to a lab. DNA from hair follicles has been a tool for more than a decade to determine specific individuals in an area or population, and their gender and relatedness. Repeated sampling of (identifiable) animals in a defined area - and some handy statistical analysis, a technique known as mark-recapture - can provide a population estimate. 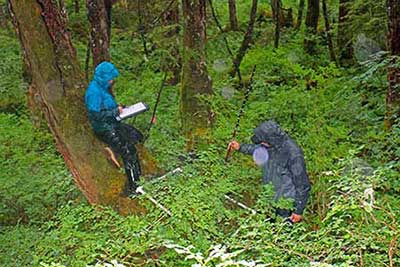 Using deer pellets to estimate populations is already being done elsewhere in Southeast Alaska. Carnahan noted that they may need to scrutinize the genetic markers a little more closely on the Prince William Sound deer population, because the deer are all so closely related. The entire population was founded from those 24 animals introduced a century ago, and they’ve gone through some significant population crashes and possible genetic bottlenecks over the decades. That affects their genetic diversity.

Ultimately, Carnahan hopes to better understand the deer population density on the islands, and get a sense for the number of deer per square kilometer.

“You think about what they go through out there, and what they are eating. They’re extremely agile and extremely fast,” he said. “They’re a pretty fascinating animal.”

This one-minute video shows a biologist using a net gun to capture a Dall sheep.

More here on the introduction of deer to PWS