By Sandra Prufer and Sue Steinacher 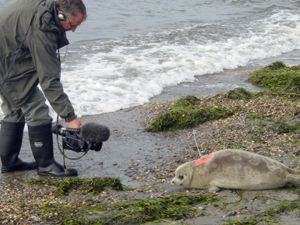 A cameraman videotapes the release of tagged and transmitter-equipped seal for an Animal Planet documentary.

Swingley marched straight into the chilly water and never looked back. Seavey was a bit more hesitant, but after surfacing a few times close to shore, the three-month old seal pup slipped beneath the waves and followed his seal-mate into the Bering Sea.

“That’s the kind of release we like to see,” said Tim Lebling, a rehabilitation technician at the Alaska SeaLife Center in Seward, as he watched the pair of ringed seal pups disappear into the waters of their natural environment.

Found on beaches in Unalakleet and Nome this spring, the orphaned seal pups were restored to health at the SeaLife Center’s rehabilitation facility and released on a beach outside of Nome on Aug. 10. Each year the center receives up to 20 marine mammal young from all over state.

“We had seven seals this year, one walrus and three sea otters,” Lebling said.

The SeaLife Center uses different themes each year for naming its foster animals. “This year’s theme was Iditarod champions. Last year we had Greek gods and goddesses,” Lebling explained.

Named after the 2004 Iditarod champ Mitch Seavey, the first ringed seal brought to the Sealife Center this year was found on a Unalakleet beach in mid-May. Swingley arrived in June after it was determined that his mother wasn’t returning to the beach near Nome. In both cases State Troopers and the SeaLife Center were called, and the seals were observed from afar before being picked up.

“They did the right thing,” said Lebling, who urges people to call the center’s stranded animal hotline (1-888-774-7325) for advice before picking up an animal from the beach. He recommends an observation time of twelve hours unless the animal looks excessively skinny or dehydrated. “Seal moms can leave their pups alone for up to 24 hours while they forage for food.”

When Swingley arrived at the SeaLife Center he was only four to five days old. “He just lost his umbilical cord and still had a full lanugo (long white fur) coat,” Lebling said, adding in four to six weeks the white coat is shed to reveal a gray body with black spots ringed with light marks. 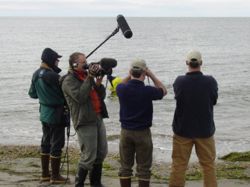 Alaska SeaLife Center technicians and a camera crew document the release of the two seals.

Weak and hungry, Swingley was first tube-fed with a milk substitute formula, with blended fish added later. After a couple of months he was weaned onto a solid fish diet, and weaned off of human contact as much as possible. “We don’t want them being friendly with humans, and we make an effort not to reward them or look them in the eyes,” Lebling said.

Seals are moved to the "graduation pool" when they are strong and old enough to feed on their own. When they are healthy, can catch fish and reach a certain size, they are released back into the wild near where they were found.

Called natchek by Inupiat Eskimos, ringed seals are the most common seals in the Arctic. They are relied upon as a traditional source of food, oil, skins and other products for Native coastal residents, and yet relatively little is known about the population dynamics and biology of ringed seals. Seavey and Swingley are helping researchers with that.

Throughout their period of rehabilitation, blood samples are drawn weekly from the animals. Lebling explains that this provides important information on the physiology of ringed seals, and allows them to check for any disease that may have entered the population.

Additionally, both Swingley and Seavey were released wearing a small satellite transmitter glued to their backs. The transmitter will allow biologists to follow the seals’ movements until the seals shed their coats next spring. Learning more about the range of these animals, Lebling explained, is important for knowing how to protect the health of their habitat.

Lebling estimates that the cost for rehabilitating a seal is about $2,000 – much less than the cost of catching a wild seal for the purpose of testing and affixing a transmitter – and the information gained is invaluable.

The seals were shipped to Nome in dog carriers, with transportation provided by Alaska Airlines. The seals and SeaLife Center staff were also accompanied by an Anchorage-based film crew.

“We’re filming a one-hour episode for the Animal Planet channel’s ‘Growing Up’ series, tracking the life of the seal pups from their arrival at the SeaLife Center to their release into the wild,” said production coordinator Karen Pearson of SprocketHeads LLC, adding that the show will be aired around Christmas time. 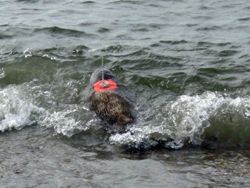 A transmitter-equipped seal takes to the waves.

From the airport, the small convoy drove about twenty miles out of Nome to the outlet of Safety Sound. “We picked this location because it’s a protected area with sufficient food sources and reports that seals of the same species live there,” Lebling said.

The carriers were opened letting the seals exit on their own. Undisturbed by the small crowd or the camera and microphone recording their actions, both pups knew their parts and shuffled down the beach to the water’s edge. First Swingley, then Seavey tested the waters and took the plunge. It wasn’t long before they were just heads bobbing on the horizon. And then they were gone. Home again.

What can you do?

If you see a marine animal that you concerned about DO NOT approach, touch or feed the animal. These are wild animals, which can be dangerous even when injured. The Marine Mammal Protection Act makes it a federal offense to touch, harass, injure or feed any marine mammal.

If you see a seal pup that appears to be injured or weak, DO NOT pick it up. Seals leave their young for long periods of time while they forage. If an animal is alone, it does NOT mean it is abandoned. Once a pup is moved, there is little chance its mother can find it again.

Observe the animal and note the animal’s physical characteristics, condition and exact location, before calling wildlife officials or the Alaska SeaLife Center. If possible take digital photos of the animal and the area.

The Alaska SeaLife Center wants to build a stranding network across the state with groups of experienced coordinators and local volunteers trained to investigate reports of live and dead stranded marine mammals. Contact them for more information. 1-888-774-SEAL or 1-800-224-2525 ext. 342