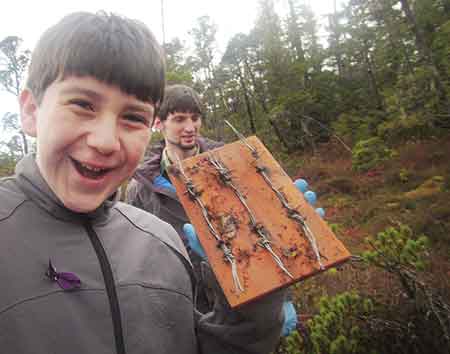 Taan Smith, a student in Corby Wehmiller’s class, smiles while holding up a hair board. (Courtesy of Corby Weyhmiller)

When it comes to studying wolves, things can get a little smelly.

That’s just one of the lessons students and teachers are taking away from an ongoing student science project that began last fall on Prince of Wales Island (POW). There, a new Alaska Department of Fish & Game wolf monitoring project was underway and one pair of educators saw a unique opportunity.

Educators Ellen Hannan, now retired after 30 years of teaching on POW, and Cheryl Bobo, technology director for the Craig School District, believed partnering with ADF&G would be a prime opportunity to integrate Science Technology Engineering Mathematics (STEM) curriculum into classrooms on POW. Furthermore, monies obtained through the Alaska Small Schools Math Grant, gave the newly-conceived student-science project the lift it needed to get started.

“I had heard about the bear mapping project in Anchorage,” Hannan said, “and I knew ADF&G was studying bears on the island, so when I heard about the wolf project, I said, ‘Oh, even better!’”

And then came the key question: How do we appeal to kids?

Hannan and Bobo went to work connecting with ADF&G educators and researchers, including Wildlife Biologist Gretchen Roffler who is heading up wolf research on POW. Teachers attended an ADF&G training in spring 2015, made possible by the grant funds, and learned how to set out hair boards and trail cameras. Teachers also developed lesson plans and learned about wolf biology, natural history and the tools and techniques involved in the wolf study.

The group decided they would mimic the study currently under way by Roffler. Students and teachers, with Hannan’s assistance, would place their hair boards in the field in deliberate locations and monitor them, recording any data and packaging hair samples exactly as researchers were doing nearby. The ultimate goal: get students out of the classroom and enjoying some real world study; expand curriculums beyond a standard textbook. A bonus? Obtaining data that could be useful to Roffler. 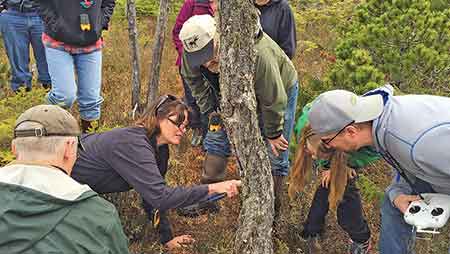 In October 2015, the groups went to work obtaining the supplies needed to construct the hair boards, essentially a sturdy plank with pieces of barbed wire attached to snag wolf hair. In a few short weeks, students were in the field placing their hair boards, applying a scent lure to them, and setting up motion-triggered trail cameras nearby.

Word travels fast on POW. Before long, Hannan said, she was getting inquiries from not only teachers involved in the project, but also from local families who wanted to participate, and from elementary school teachers hoping for presentations on wolves.

“It’s really been a fairly easy thing for the middle and high school students to do this, because of all the high level math and science in there,” Hannan said, “but we’ve also had a second grade teacher approach us and say, ‘We have pen pals and they are asking us about wolves. Can you come and tell us about the wolves?’ So, we’ve been doing presentations, we’ve done simulations of the hair boards.”

The project has overflowed and produced not just a great learning opportunity, but also an impressive amount of collaboration. Teachers who would have never communicated otherwise are now sharing experiences. Students are reaching out beyond the island to connect with other communities that have wolves in their surroundings. Educators and residents are forming relationships with ADF&G biologists like Roffler and Wildlife Biologist Steve Bethune, formerly based in Craig and now in Sitka. Teachers and organizers, like Hannan and Bobo, have also formed partnerships with Native corporations on the island to gain access to private lands to set out hair boards. Above all perhaps, Hannan said the students are gaining real world experiences hinged around a topic that engages just about all residents on POW. 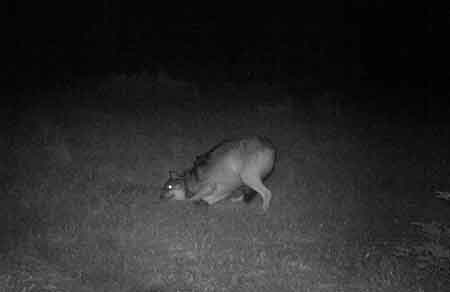 A motion triggered trail camera image of a POW wolf rubbing on a hairboard.

In short, it’s been an exciting time.

“We were all going to be really excited if we got just one hair sample, even if it wasn’t a wolf,” Hannan said. “We ended up with 10 samples, and we know for sure they’re not all wolf. But when one group from Klawok saw and heard wolves when they went out, we all felt that excitement.”

But what’s up with the stink? Besides learning about the study method of capture/recapture, and exploring topics ranging from geography to biology, students learned the wolf lure smelled like a savory mix of skunk and sewage, with just a hint of garlic.

Hannan said when the lure they’d ordered online arrived at the Craig post office, she was called immediately to come pick it up.

“I could smell it from outside the building!” she said.

And while those applying the lure quickly learned of its potency, it was necessary to draw the wolves to the hair boards where, hopefully, they’d roll and snag some hair, providing some of their DNA in the hair follicles.

“Prior to some of our outdoor experiences — we’d go to the library, stroll through the park,” Cheryl Bobo said. “All the sudden, it’s not just about our little world here, the kids have really expanded globally to compare our environment and our map, our technologies and sciences with others. They want to know — ‘Hey these are our wolves, what about your wolves?’” 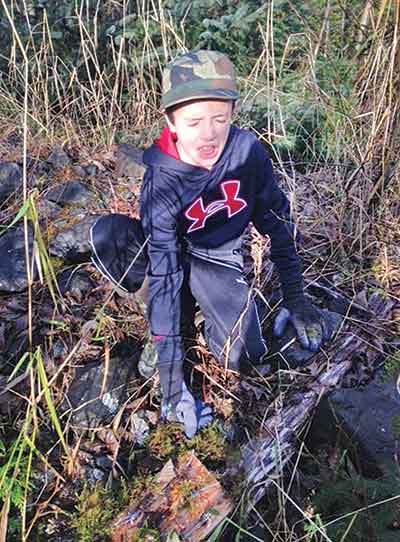 Eli Mank, 10 years old, reacts to the smell of the scent lure being used on hair boards on Prince of Wales Island. (Courtesy of the Mank family)

Roffler said she’s just happy she could be part of the effort.

“If it does work out … and we get samples that we can genotype, then yeah, we can use the data and that’s a big bonus,” she said. “But I think the real bonus is that these students are learning what is involved in being a biologist.”

Hannan and Bobo said they are committed to continuing the project this spring and next fall. In January, students and teachers were working to input their data into the citizen science website, CitSci.org, which allows participants to see all the data collected from the varying classrooms.

Interest in the wolf population on POW remains high both for island residents and ADF&G, which is a good thing for Roffler who said she’s constantly getting emails and phone calls from area residents who saw wolf sign, or snapped photos of the animals. As a researcher, the more information the better, she said, especially if location is included with the sighting or photograph. Sightings can also be recorded online at a new ADF&G website.