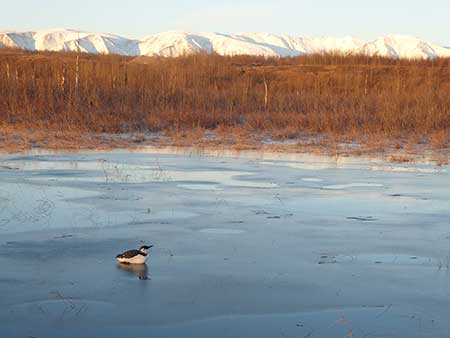 This bird is in an unusual localtion for a seabird such as a common murre - the Palmer Hay Flats. Photo by Doug Hill.

Over the last 12 months, striking numbers of dead and dying murres have been documented from Juneau and Kodiak to Glennallen and Fairbanks, with some counts tallying birds by the thousands, as observed along the Prince William Sound coastline near Whittier. When sightings reached a peak in Southcentral and Interior Alaska in January, wildlife agencies were inundated with phone calls from concerned citizens. The Fairbanks Alaska Department of Fish and Game office received over 70 calls on January 1st alone. The Palmer office had multiple reports nearly every day in January. Thanks to reports from the public and collaborative efforts among wildlife agencies, the magnitude of this die-off is better understood. But the work is far from over. More reports have come in from Unalaska, the Pribilof Islands, and Lake Illiamna, and more are expected through the spring. It is critical that the public remain vigilant in reporting sightings. If you observe dead or weakened murres, please do not touch them or attempt to transport them. Report the estimated number of birds, date, time and location by calling 1-866-527-3358 or emailing AK_MBM@fws.gov.

The following account at Lake Illiamna is an excellent example of citizen science in action.

It was a pleasant February afternoon in Illiamna when the Lake and Peninsula Borough meeting adjourned. Randy Alverez, the vice president of Igiugig Village Council was hitching a flight home with pilot and mayor, Glen Alsworth Sr. and the borough manager, Nathan Hill. This crew was familiar with flying over Lake Illiamna in all seasons, but this winter was unusual. “It’s been so warm, the lake never froze,” Alvarez said. “We should be able to drive snow machines and four-wheelers out there.”

As they set out over the ice-free water, they peered down at a disturbing site: a constant line of black and white bird bodies dotting the shoreline. Local and national news reports had made the men aware that common murres in Alaska were in trouble and showing up in unfamiliar territory. Alvarez stated that it was a rare occurrence to see a murre on Lake Illiamna and he had never seen anything like this. Fortunately, not all the birds were dead. With the nice weather and open water, a resident from Kokhanok boated across the lake to Illiamna the same day and reported seeing lots murres swimming around.

After dropping Alvarez off, Alsworth and Hill flew back north along the shore in order to count the carcasses. Igiugig is on the southwest end of the lake, and a mass was bunched up around there.

“Easterly winds could have pushed them in,” Alsworth said. As they flew, he looked out his window and signaled to Hill every time he counted 10 birds pass the strut of his plane.

“Since there was no snow on the ground, we counted white spots,” Alsworth said. “If the birds were lying face down, we probably missed them.” Still, they estimated a number between 8,000 to 10,000 birds.

“I bet that number would be even higher if we were on the ground,” he said 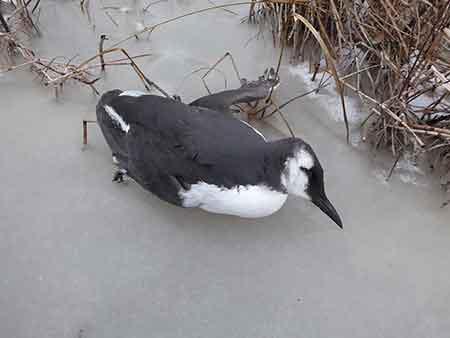 As a Bristol Bay fisherman, a hunter and the chairman of Lake Illiamna’s Advisory Committee for Fish and Game, Alvarez is no stranger to wildlife issues. So when he heard the estimate from Alsworth and Hill, it was intuitive to report the observation to his local wildlife agencies. Many state, federal and non-governmental organizations have been working together to make sense of the die-off. In no time, Alaska Department of Fish and Game Fish and Game (ADF&G), US Fish and Wildlife Service (USFWS), US Geological Survey (USGS) and others were made aware of the birds on Lake Illiamna.

“It is so crucial to report,” said Rob Kaler of US Fish and Wildlife Service. “Organizations like COASST (The Coastal Observation and Seabird Survey Team) have helped with on-the-ground surveys in Prince William Sound, but we really need people to continue to call in—it is by far the most effective way to identify where the birds are and how many have died.”

Kaler said it’s not necessary to collect specimens unless wildlife officials specifically ask for them.

One of the foremost researchers of seabirds in the Pacific Northwest is John Piatt, PhD., a research biologist with the USGS Alaska Science Center. It didn’t take long for him to learn about the happenings on Lake Illiamna. Piatt quickly got a hold of Alvarez in Igiugig and asked him to collect intact specimens. He collected and delivered 21 birds to the USFWS Becharof Wildlife Refuge in King Salmon to be prepared for shipping.

“It’s difficult to say how long ago the birds arrived at the lake or how long they’ve been dead,” said refuge biologist Melissa Cady. The condition of the carcasses on the lake varied; some looked fresh while others were reduced to bits and pieces by dint of scavenging eagles, ravens and foxes.

The carcasses were sent to the National Wildlife Health Center (NWHC) in Madison, Wisconsin where they will be tested for toxins and parasites. While the murres appear emaciated, researchers have not eliminated the possibility of toxins from such things as harmful algae, though testing has proven difficult since researchers need stomach contents to detect it. Ultimately, the murres found at Lake Illiamna add to the geographic range and the timeline of the largest murre die-off in Alaska’s recorded history.

According to Dr. Piatt, more research is needed to fully understand how atmospheric influences impact the ocean’s lower trophic levels, and the forage fish that murres eat. Over the past two years, the North Pacific has been hit by unusually warm water, driven by the cyclical El Nino Southern Oscillation (ENSO) and the anomalous warm water mass referred to as “The Blob.” While these two phenomena are discrete, the resulting warm water could be the culprit for the murres’ lack of success.

Warm water events can affect distribution of the prey species that murres rely on. Warm water at the ocean’s surface makes it more difficult for cold water upwelling to take place, thus strengthening stratification in the water column. Some of the forage fish that murres prefer may not like the warmer waters and so they go deeper, or they go off shore to the shelf edge. Fish, like capelin and sand lance go hide in deeper water anyway so they’re not as available in the winter. Other fish like juvenile pollock usually stay in the water column all winter long. But if the water column is particularly warm, they might go a little deeper or further off shore.

A group of murres in Auke Bay, near Juneau, November 2015. Photo by Kristen Romanoff

There is a direct line between changes in water temperature and recruitment. Warm waters may not be suitable for certain fish species’ ability to recruit young. Ideally, fish that broadcast thousands of eggs during spawning will have at least one that will survive into adulthood. The timing is very critical for these larvae as they emerge. The Match-Mismatch Theory suggests that if a particular fish species puts its larvae out at a specific time of year, but things warmed up two months early, and the phytoplankton and zooplankton were two months early, by the time the larvae get out there looking for food, it would be too late because the food would have been eaten up by other fish species.

Many fish have multiple years to spawn so they aren’t severely impacted by short-term warm water events, like those caused by an ENSO. However, for short-lived fish like capelin that may only have two years to spawn, two years of warm water could mean that they won’t produce young to recruit and the population could tank in a hurry.

A one-kilogram murre has a very high metabolic rate - it requires a whopping 40 to 50 percent of its body mass every day. Without food, it can only survive for three to four days. By comparison, a small cod fish similar in size to the murre only has to eat maybe once a week. But fish are cold-blooded. Their metabolism, it turns out, is dependent on water temperature. A laboratory study performed in the 1970s looked at feeding rates of cod at different temperatures. The researcher found that cod had to eat significantly more food as the water temperature increased. A rise in water temperature by a couple of degrees can have a profound effect on predatory fish in terms of how much food they need.

“Predatory fish consume ten to one hundred times more fish than do seabirds and mammals based on sheer volume- there are so many more fish in the ocean than there are birds in the air,” Piatt said. “Fish consume an order of magnitude more under normal circumstances, but when you turn up the oven, suddenly the predatory fish have to eat a lot more.”

Murre nesting colony at Round Island, video by Maria Gladziszewski

A short video of a group of common murres in Auke Bay near Juneau. By Kristen Romanoff.

Sierra Doherty is a Wildlife Education Specialist and is based in Palmer.