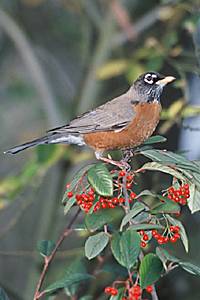 Late summer in Alaska and trees like the mountain ash, with its bright orange-red berries, draw flocks of noisy robins. The birds are packing in food as they ready for their fall migration south.

Just as the arrival of robins in Alaska is a sign of spring, these congregations of robins prior to migration is a sign that autumn is approaching.

Robins are most vocal in the spring and early summer and tend to quiet down in July and August. Their familiar “chup, chup” call, as well as the “cheer up, cheerio,” song may be heard again in late summer as adults and young of the year come together in the weeks before they leave Alaska. The yearling robins, about the same size as adults, can be identified as their breasts and shoulders are more spotted than the adults. As fall approaches, these groups of birds band together, and robins migrate in large flocks.

Robins nest throughout Alaska as far north as the Arctic. Some robins over winter in Alaska, and can be found in Southeast year-round. Robins have even been seen as far north as Fairbanks around the winter solstice. Some of Alaska’s robins are short-distance migrants that winter along the West Coast. However, most robins travel further south. Large numbers of robins winter in America’s southernmost states, and many travel into Mexico and Central America for the winter months.

Years ago, robins were slaughtered in vast numbers in southern states as they gathered in winter in large flocks. Robin pie was popular, and hunters supplied commercial markets. Federal laws protecting songbirds put an end to this practice.

Because the American robin has such wide habitat preferences – it will nest in urban, rural, wilderness, alpine and coastal environs – it is probably the most common, widespread and familiar bird in North America. Robins are the largest member of the thrush family, and robins have been documented living as long as 17 years.

The familiar sight of a red-breasted robin hopping across the lawn and pausing, head cocked, hunting worms, led some to believe the birds could hear their prey moving underground. But robins have excellent eyesight, and studies have shown that robins use their eyes, not their hearing, to locate worms.