Inside the Wolf Den 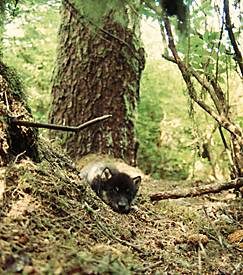 Wolf puppy laying outside near the entrance to the den

Wriggling into the wolves’ underground den, I could make out several squirming wolf puppies curled up on top of one another. Outside, the pack’s howling and barking was escalating.

Coming face to face with a half-dozen wolf puppies was the high point of a week-long project to document some of the work being done by Fish & Game biologist Dave Person on Southeast Alaska’s Prince of Wales Island. Person has been studying these wolves for 12 years and for the past five he’s been looking into wolf dens to gauge reproductive success. To have a sustainable population, reproduction must exceed mortality, and Person needs to know how many puppies are being born.

The day of the encounter started with several hours of hiking through muskeg, streams and forest. We continued along a stretch of beaver ponds, and as we approached the den sites Dave signaled us to be quiet. It was in a typical site, with fresh water and food nearby. Person wanted to avoid alarming the puppies, causing them to move deeper into the den.

I squirmed into the wolf den’s deep entrance and followed a narrow, branching tunnel. Using an infra-red camera probe attached to a long flexible shaft, I moved the camera deeper. Person was outside looking through the viewfinder, directing me as he searched for telltale eye-shine.

Light seeping in from other holes revealed several puppies. Piled together, it was difficult to count them, but I could make out six in all. Two of the puppies stared back at me with milky-blue eyes. Person estimated the pups to be four-weeks old.

The pack was just 25 to 30 feet off, barking and howling but concealed from view by the lush undergrowth. They were nervous, but not aggressive. 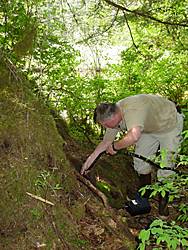 Dave Person, ADF&G Biologist inserts the camera probe into the main entrance to the den.

“We don’t want to disturb the wolves,” Person said. “This is the only way that I can think of getting the data.” Knowing the litter sizes of these wolves is critical to the understanding of their reproductive success and population dynamics. Over the course of this project Dave and his assistant Amy Russell have been in over 27 active dens and have counted puppies in almost all of them.

“There have been only three cases where the puppies were relocated after we were there,” Person said. “Even then, the relocated dens were less than a kilometer away from the original site and the pups were fine after the move.”

The intensity of the pack’s howling and barking escalated. The alpha female emerged along the lake shore, her moaning howls intensifying. We quickly recorded the den site information, packed up our equipment and left the area. Once we were a reasonable distance away, we took a break. As the wolves howled in the distance, Person took a moment to explain his work.

“The main reason we are doing this research is that there are large scale changes occurring on the landscape due to logging that will affect deer,” he said. “We expect deer numbers to decline on Prince of Wales Island over the long term. This will cause a chain reaction that will impact all who prey upon deer: hunters, subsistence users, black bears…and wolves.”

To better understand the long-term viability and population dynamics of wolves on Prince of Wales Island, Dave is comparing reproductive success versus mortality rates. The Prince of Wales Island wolf populations are the most heavily trapped in the state, outside predator control areas. Over a third of the island’s wolves are trapped each year. 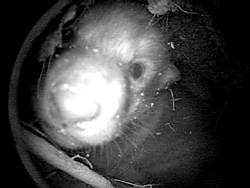 A close-up view of a 4-week old wolf puppy taken from the viewfinder attached to the camera probe that is placed inside the den.

One of the ways the U. S. Forest Service is attempting to mitigate long-term effects of logging and road building on wildlife is by setting aside forested habitat in old-growth reserves. Person’s research has shown that the ratio of reproduction to mortality of wolf packs whose home range includes old-growth reserves is more than double of those packs whose range does not include the reserves.

“This demonstrates that the old-growth reserve strategy for individual wolf packs may work,” Person said.

Person points to the bigger picture and asks, what if changes to areas outside the
old-growth reserves affect the suitability of those habitat for bear, wolf and deer? Would there be enough old-growth reserves to sustain populations of these animals?

Using reproduction information gained from counting litter sizes; mortality information from the animals that trappers and hunters bring in to Fish and Game to be sealed, and animal movements from following radio-collared wolves, biologists can model and predict what may happen in the future.

As we retraced our steps along the lakeshore, streams and muskegs back to the truck, I imagined the female crawling into her den to join her puppies where less than an hour ago, I shook with excitement in seeing the newest arrivals to the pack.