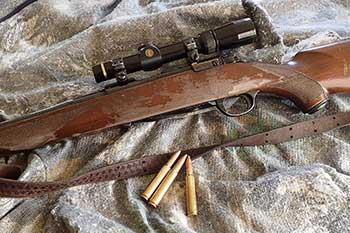 What’s the best all-round big-game rifle for Alaska? That may be a personal question. But at the risk of starting an argument, we’ve whittled the list down to five.

As the young bull walked the meadow’s edge in long, casual strides, I’d shouldered my rifle and found the animal in my scope. Then, as I’ve done many times over the decades, I’d placed the crosshairs low behind the bull’s front shoulder, taken a deep breath, slipped off the safety, and squeezed.

As with almost every moose I’ve harvested since the late 1970s (a gamut spanning everything from spindly yearling bulls to trophy-sized giants with antlers spreading more than 60 inches) and nearly every brown bear, black bear, caribou and Dall sheep I’ve taken, the hunt ended with a single shot from my 30.06 Remington Model 700 BDL loaded with 180-grain silvertip bullets.

That’s a pretty good track record. But even so, not everyone would agree that the 30.06 is the best choice for Alaska big game. Some hunters believe greater knockdown power is needed to ensure swift, clean kills not only for 1,200-pound moose, but for equally large and notoriously tough-to-stop brown bear. Others, seeking flat-shooting rifles for longer range shooting in open country for lighter game – e.g., Dall sheep or caribou – favor smaller calibers, such as the .270. 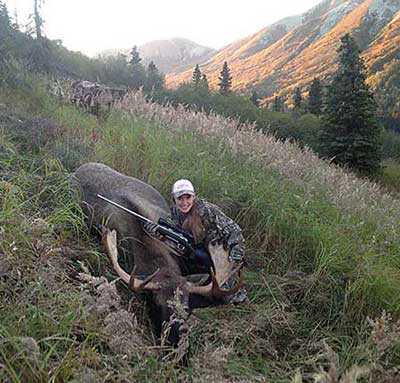 Lolly Hale with her first moose in the Wolverine Creek Drainage.

And then there’s everybody in between.

Ask a dozen hunters to name the best all-round rifle for Alaska big game and you’re likely to receive a dozen different answers. Along the way, expect some passionate arguments and, in the end, figure you’ll probably raise more questions than answers.

That’s because the question, “What’s the best all-around big-game rifle for Alaska?” is highly subjective, the premise not unlike a Zen koan. Indeed, the concept has a way of transcending simple logic and applying itself to the heart of the hunter.

“One thing I’ve learned after 14 years at the (rifle) range is that everybody’s an expert,” said Hunter Education Coordinator Lee Rogers.

Rogers believes the 30.06 is a contender for the “Best All-round Alaska Big Game Rifle” title, but like any other caliber, it’s not perfect.

“Ammunition for the 30.06 is readily available, relatively cheap, and the recoil’s not bad,” Rogers said. Then again, he added, “Dedicated brown bear hunters would probably want to go with something more along the lines of a .338.”

Not every Alaska big game hunter seeks trophy brown bears. But that doesn’t discount the need to carry a rifle powerful enough to quickly stop the continent’s biggest bruin. Most of the state is bear country and experienced hunters realize that chance encounters can happen any time, without warning. A hunter packing a .338 or .375 H&H magnum for 100-pound black-tailed deer might appear over-gunned; that is, until we take into account the hunt is on Kodiak Island where sudden close-range encounters with 1,500-pound brown bears can occur. 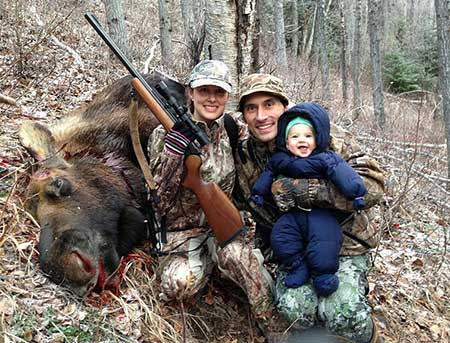 Phillip Weidner and his family on Thanksgiving Day, 2014.

Taking the bear factor into account, Rogers generally totes in the field a .35 Whelen.

Much newer on the big-game hunting scene than the 30.06 – which was introduced by the U.S. Army in 1906 as a service weapon and later standardized – is the .300 short magnum. The .300 Winchester short magnum’s cartridges along with those of contemporaries manufactured by Remington and Ruger fit into short actions and are believed by many expert shooters and students of ballistics and velocities to be more accurate. They also have plenty of punch, according to Rogers.

The lightest rifle considered for the Alaska Department of Fish and Game’s Top Five Big Game Calibers list was the .270. As mentioned earlier, these dependable rifles shoot straight and true at long ranges. They’re perfect for light-bodied Dall sheep in the mountains and caribou over wide-open tundra. And even though a few big bull moose are taken with the .270 in Alaska each season, most hunters believe the caliber is simply too light to be considered best for overall use. 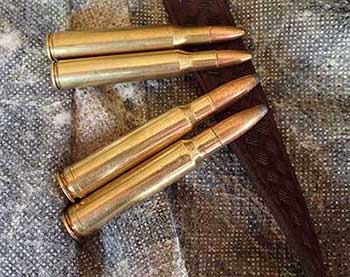 With these thoughts in mind, and by integrating the findings of an unofficial department poll published in 1999, an unscientific 2015 poll provided by the Alaska Outdoors Supersite (see poll results), and more than a little Kentucky windage, we’ve arrived at the following consensus for the department’s Top Five Big Game Calibers:

Again, boiling down to five the many available and appropriate Alaska big-game-size calibers leaves out plenty of popular, perfectly good options. But it does provide a baseline from which to work. Beyond that, it’s important to remember that the best, most successful hunts are culminations of thorough planning, hard work, good marksmanship, proper shot placement – and a pinch or two of good luck.

Division of Wildlife Conservation Public Information Officer Ken Marsh is a lifelong hunter who was raised in Alaska on moose and caribou meat.