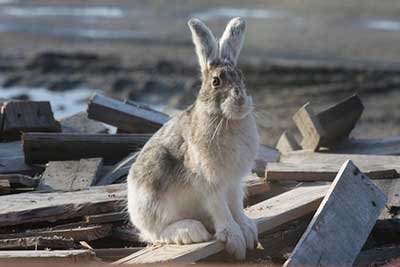 This is the first human case in Alaska since 2009, although there have been cases of hares diagnosed with the disease in recent years. Tularemia occurs sporadically in Alaska, and this marks the 30th case in 70 years. Interior Alaska accounts for about half the total cases, and Southeast Alaska has seen only one case.

Tularemia is an infection caused by the Francisella tularensis bacteria. The disease has been documented for thousands of years under a variety of names, but the tularemia bacteria was identified by American pathologists in 1912 and named for Tulare county, California. It most often kills hares but can also make people, dogs, and cats seriously ill. While it can be fatal if untreated, it is easily cured if diagnosed quickly and the correct antibiotics are prescribed. The most common signs in people and pets are lethargy with high fever and swollen lymph nodes. Most human infections become apparent after three to five days.

Hares are the primary host and the disease is spread by ticks. The species of tick known to carry the bacteria prefer to live on hares, but will occasionally bite pets or people. It is most often diagnosed in hares and pets in the Interior between Memorial Day and Labor Day because the ticks are active during the summer.

Although tick bites are one possible cause, pets most often get tularemia from mouthing or catching a sick hare. Interior residents, including trappers, can become infected by handling the hares or from the pet’s saliva, even before the pet exhibits signs of illness. 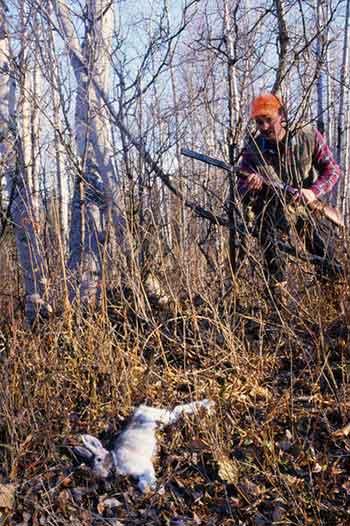 In June of 2009, a Fairbanks woman wrestled with her dog to take a dead hare from its mouth. She had a splinter in her right index finger and it became infected with the bacteria, a lesion developed a few days later. Within a week she developed a fever of 104, she was in and out of the hospital for almost a month. A second case was reported the same month – also a woman who developed a skin lesion after her dog brought home a dead hare.

“Cases of tularemia in humans are rare and can be avoided by adhering to safety precautions," said wildlife veterinarian Dr. Kimberlee Beckmen. "Do not allow your pets to roam free or have access to sick hares. Dogs and cats that go out of doors can be treated with a veterinary product that will kill ticks within 24 hours so that disease transmission doesn’t occur from ticks feeding on pets.”

If your pet does come in contact with a dead hare, wear gloves or use a plastic bag to take the animal away from the pet and wash your hands thoroughly after handling anything coming out of the pet’s mouth. Thoroughly wash any scratches, bites, or wounds made by pets or wildlife, immediately with soap and water, and seek medical attention, especially if fever, redness, swelling or flu-like symptoms appear afterward. Double bag and dispose of dead hares in the trash or bury where dogs and scavengers cannot get to them.

Colorado is reporting an outbreak of the disease and reported 11 cases in May, 2015, one fatal. In two of the cases, including the fatality, health officials believe the victims contracted the bacteria by inhaling it while mowing or working in their yards. In 2000, a fatal case occurred in Martha’s Vineyard, New York, when a man mowing his lawn ran over an infected, dead rabbit and then inhaled airborne particles. Hunters are possibly at risk for this because of the potential of inhaling the bacteria during the skinning process.

Tularemia has been investigated by the U.S. military as a potential biological weapon because it can be readily “aerosolized.”

Last year, the Colorado Department of Public Health and Environment recorded 16 human cases, representing the second highest number of cases since 1983 when there were 20. Before 2014, the previous average in the state was fewer than four cases a year.

The ADF&G website contains more information and a form to submit ticks or dead wildlife for examination:

More information about ticks in Alaska is contained in an article in the Alaska Fish & Wildlife News.