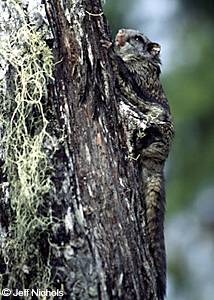 Climbing for science: This northern flying squirrel, released after being live-trapped on Prince of Wales Island, sports an ear tag.

"We use a mixture of peanut butter, molasses and rolled oats, formed into a nice peanut butter ‘cookie,’" said biologist Jeff Nichols.

Nichols estimates he’s trapped and released 300 to 500 flying squirrels for research projects, mostly on Prince of Wales Island. He said they are about the size of the red squirrel, Alaska’s only other tree squirrel, but completely different in other respects.

“Their fur is really soft,” he said. “They use their tail as a rudder when they glide, so their tails are quite a bit bushier. And they have a patagium, the membrane they spread out to glide.”

The patagium is elastic skin that stretches between the front and hind legs. It doesn’t interfere with the squirrel’s tree-climbing agility and enables them to transform a headlong leap from a tall tree into a glide of as much as 100 yards long.

“I’ve seen glides myself that were easily 60 to 70 yards,” Nichols said. “They really take advantage of the terrain. On a steep slope they’ll climb a tree and then potentially go to the bottom of the hillside.”

Owls are predators of flying squirrels, and marten, agile, cat-like weasels, will also take them if they can. Goshawks, which are not nocturnal, have also been known to catch flying squirrels. That’s because Alaska’s long summer days create risks for a nocturnal animal.

“In summer, they have to be out in daylight, especially in the Fairbanks area,” Nichols said. “There will be some overlap between their nocturnal activity and diurnal predators.”

Flying squirrels make their dens in tree cavities, under loose bark and in “witches’ brooms,” thick clumps of branches in trees. Studies in the Interior indicate flying squirrels switch between about a dozen different dens. In a night of foraging a squirrel may travel a circular route covering about a mile.

Flying squirrels eat mushrooms but favor subterranean fungi, such as truffles, and will also eat berries and even bird eggs. Hunters have reported flying squirrels coming into hunting camps at night and eating fat from hanging game carcasses. Lichens become an important dietary component in winter when other food sources are unavailable.

Like red squirrels, flying squirrels don’t hibernate and stay active all winter –although they have been known to den up for the coldest stretches of winter, sometimes in small aggregations with other flying squirrels.