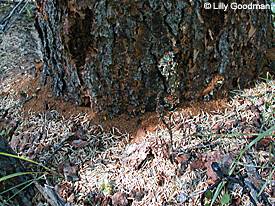 Boring dust, evidence of beetle activity in a spruce tree, looks like fine sawdust at the base of an infected spruce tree.

What do red squirrels, moose, soil bacteria and ruby-crowned kinglets all have in common? All are affected by an outbreak of spruce bark beetle.

Spruce bark beetles have killed spruce trees in vast areas of forest on Alaska's Kenai Peninsula, Copper River Basin and Anchorage Hillside. During the 1990s, almost three million acres of white and Lutz spruce forests were impacted by the beetle. Today, the intense rate of beetle kill seems to have subsided on the Kenai Peninsula and along the Anchorage Hillside as the beetles have essentially eaten themselves out of house and home. However, infestations continue in small pockets throughout Alaska, including the Copper River Basin and areas near Seldovia, Lake Iliamna and Haines.

Spruce bark beetles occur naturally in Alaska forests and are important in initiating the decomposition of spruce trees. Under normal forest conditions, spruce bark beetles dine only on wind-felled trees, or trees with lowered defenses such as very old, slow growing or highly stressed trees. Outbreaks occur when there is a sudden increase in prime bark beetle habitat, such as an abundance of newly fallen trees, or when climatic conditions are favorable for a rapid increase in beetle reproduction. Windstorms, some types of logging, the clearing of a right-of-ways, drought, warm weather and fire suppression all create conditions ripe for bark beetle outbreaks.

The beetles may be small, but their impact on the boreal forest ecosystem is vast. Understory plants, wildlife, fish, soil dynamics and humans are all affected by bark beetle outbreaks.

One of the most obvious changes is the make-up of the forest. With the thick canopy of spruce gone, an entirely different community of plants is sometimes able to emerge. Canada blue-joint grass is an example of a plant that takes advantage of the increase in light brought on by spruce mortality. The grass grows tall and thick in areas of the Kenai Peninsula where there are lots of dead trees, and especially where beetle-killed spruce have been salvage-logged. The cover of dense grass lowers soil temperatures, creating a difficult growing environment for some understory plants. Others thrive - shrubs like willow and alder and deciduous trees like poplar and aspen do well in the new, sunnier environment. This early successional forest is better habitat for moose, which favor a diet of willows.

Birds that nest in the forest understory may also benefit from the change in canopy. In a Copper River Basin study in 2001, Steve Matsuoka and others found that beetle-killed forests have a higher density of hermit thrushes and orange-crowned, Wilson's and black poll warblers than the nearby forests that were not impacted by the beetle. Woodpeckers are also known to become more abundant during and directly following an outbreak, as they are able to successfully forage for adult beetles and larvae in the infected trees.

Not all wildlife is positively affected. The opportunistic red squirrel may make a meal out of spruce bark beetle larvae by pulling back the bark from infested trees, but red squirrels ultimately rely on living spruce for their habitat. Indeed, Matsuoka's study also documented a decline in red squirrel populations where spruce mortality was high. Birds like Townsend's warbler and the ruby-crowned kinglet also rely on mature spruce for nesting habitat. Wide-spread loss of mature spruce thus does not bode well for these inhabitants of the boreal forest.

Red-backed voles are another forest denizen that have been studied closely in association with spruce bark beetles. In 1998, state wildlife biologist Thomas McDonough discovered reproductive rates of these quick little rodents to be lower in beetle-killed forests. Changes in vole reproductive rates and populations may have a large impact because voles play a key role in the boreal forest. They are the prey base for dozens of species, including hawks and owls, and they help to disperse mycorrhizal fungi, which are essential in helping to bring nutrients and water to the roots of many types of plants and trees.

Extensive spruce mortality can also affect aquatic organisms. With fewer trees sucking up water from the soil, water tables and stream levels tend to rise. The amount and size of woody debris in stream also changes as the trees die and eventually decompose. Both stream levels and amounts and sizes of woody debris in streams are important factors that affect salmon spawning.

Not even bacteria escape the impact of the spruce bark beetle. Radical changes in the forest canopy can wreak havoc with activities in the soil. For example, an increase in sunlight in beetle-killed forests may cause mosses to dry out and die. Moss normally insulates the ground, keeping the temperature and pH of the soil low. Mosses also grab and store available nutrients. When mosses decline due to a bark beetle outbreak, the soil environment changes, potentially affecting the bacteria that live there. Soil bacteria are important because they control the amount of nutrients that plants get.

Nutrient stores are also directly affected. Beetle-killed trees no longer draw nutrients from the soil. Studies of other forests experiencing insect outbreaks, such as the gypsy moth and the California oak moth, have found that infestations cause significant increases in the amount of nitrogen in the soil available to plants. More nitrogen for plants is good for herbivores like hares and moose that rely on plant nitrogen for protein.

Lastly, humans are affected by the spruce beetle in many ways. For some, it is a welcomed opportunity to gain more firewood or house logs, or open up a view. For others, it is a devastating economic loss or a heart-wrenching change to the scenery and character of the environment. For all, acres of dead trees pose a dangerous fire risk that lingers for 10 years or more.

Now that you know the scoop on bark beetles, you can look around your home or favorite forest spot for spruce bark beetle impacts. If you are confident that a tree is infested or dying, peel away the bark and look for larvae mining galleries beneath. Imagine what a treat the little grubs would be if you were a squirrel or a woodpecker