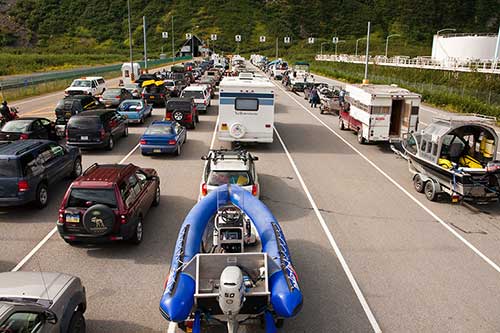 Vehicles waiting to pass through the Whittier Tunnel on the Portage Glacier Highway. Photo by Milo Burcham.

Build it and they will come. Sometimes that’s wishful thinking, sometimes it’s true.

In the case of the Whittier Tunnel on the Portage Glacier Highway, it’s true in spades. The access led to a dramatic increase in the number of hunters from Anchorage pursuing black bears in Prince William Sound. That was good for the economy, and many of those hunters were successful. Thousands of bears have been harvested over the past decade-and-a-half, and wildlife managers, guides and transporters, wildlife viewers and area residents are concerned that the level of harvest is not sustainable.

“Springtime black bear hunting is very popular,” said wildlife biologist Charlotte Westing. Westing manages bears and other wildlife in Prince William Sound for the Alaska Department of Fish and Game; she’s based in Cordova. “It’s a multi-species endeavor, people bring shrimp pots, fish for halibut, and hunt for bears. It’s the first chance to get out and recreate after the long winter.”

Before June 2000, the Portage Glacier Highway dead-ended at a railroad tunnel about a 45 minute drive from Anchorage. Access to Whittier was by railroad. The train could accommodate passengers, and about 20 vehicles on a flatbed railroad car. About 20,000 people traveled this way each year. That changed in 2000 when work was completed, modifying the tunnel to accommodate traffic. Overnight, Whittier became an hour-drive for half the population in Alaska. Whittier saw 120,000 visitors that first year, and annual numbers settled at about 100,000 visitors. Many people trailer boats or keep boats in Prince William Sound.

The annual black bear harvest more than tripled. In the 1990s, it was under 200 a year, in the mid-2000s it went up to more than 600 in some years. With such high hunting pressure, the take of female bears really started climbing.

Bears are good for the economy. About 800 hunters pursue black bears in Prince William Sound every year. According to a 2014 study on the economic value of wildlife in Alaska, each hunter spends between $500 and $6,000 on their hunt, contributing more than $830,000 to the economy. Wildlife viewers also seek bears, and during the peak of the season, an estimated 600 to 700 people per day participate in wildlife viewing trips, paying $80 to $100 for a trip (wildlife watching trips are multi-species, and bears are one of the most sought-after species). That translates to about $5.5 million. 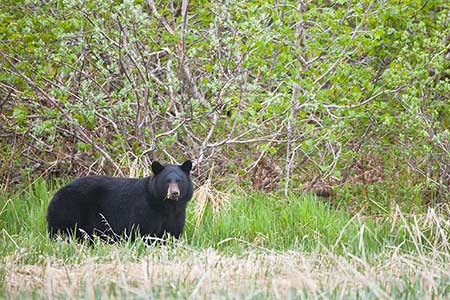 The concern is that the harvest is not sustainable.  Westing said the annual harvest objective is a minimum of 200 bears, and that’s been met every year since 1999. In fact, it more than doubled in eleven years and tripled twice. More than 600 black bears were taken in the peak year, 2007; more than 500 were taken in two years of the past 15 years, more than 400 were harvested each of four years.

It’s difficult and expensive to precisely determine the overall black bear population in a place like Prince William Sound, and Westing hopes state wildlife biologists can launch some projects addressing that in the near future. But there are plenty of signs that bear numbers are declining.

“One big compelling thing is the harvest data,” Westing said. “It’s been steadily declining since 2007, and in the last two years it’s really dropped off. Also the high percent take of females is a red flag for bears.”

Fewer females are typically taken for several reasons. It’s illegal to shoot a sow with cubs, so that eliminates a fair number of bears from the available pool. Males tend to be more conspicuous in the spring because they’re looking for mates and covering more ground than the females. The high harvest of females indicates there are likely fewer males around. 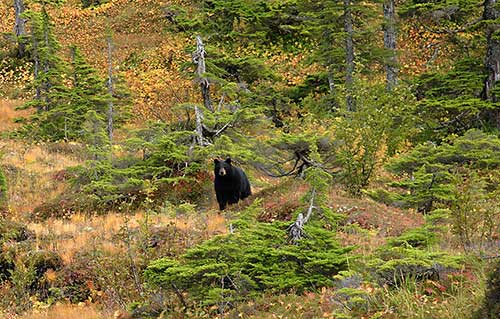 2014 was a good year for bears, spring came early and many bears moved to the alpine and subalpine areas by May. Harvest was low. Photo by Steve Moffitt.

Anecdotal reports indicate hunters are also taking smaller bears. Hunters tend to target big bears, and managers look at skull size as an indication of the overall size of bears harvested. Hunters are required to “seal” bears, to bring the skull and hide in to a Fish and Game office or representative so some information can be collected.

When Westing transferred to Cordova from Kotzebue in May 2013, she immediately started hearing about bears. “Since I showed up in Cordova there’s been a tsunami of public comment about how bears are declining in Prince William Sound. I’m getting letters. I’m hearing concerns from people who are out there researching other species, and have no stake in it, they’re seeing the decline.”

Brad Von Wichman and his sister Alex operate a charter boat and a research vessel called the Babkin.  They also commercial fish.  Brad said he thinks black bear numbers are down.

“You would always see bear. I remember counting 12 bear on one stream once,” he said. “It’s shocking now the absence of them. I think it’s overhunting. It’s not a lack of fish, we’ve had record setting years for humpies. We do a lot of back country skiing, and when you’re skiing (in spring) you see these boats, one after another cruising the shores.  I’ve got nothing against it, but there are a lot of them, it’s a cheap hunt for those guys.”

In the past he transported hunters, and offered an example of why he now prefers to take people wildlife watching instead. “We had some folks over from Frankfurt, Germany. We put them in kayaks. When bears are feeding in salmon streams, if you’re quiet you can get right up to them and it’s a life changing experience. I find more value in that, I think it’s a better use of the resource, but that’s a personal thing.” 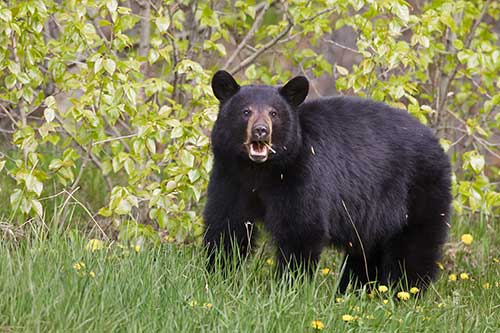 Changes in the way black bear hunting is managed in Prince William Sound is likely in store. Photo by Milo Burcham.

David Pinquoch has run Alaska Good Time Charters out of Whittier since 1991. He transports hunters and takes people fishing and wildlife viewing.

“A hunter has to work twice or three times as hard to get a nice bear, the easy bears have been harvested. No question about it,” he said.

He’s noticed first hand that the hunters he’s transporting are harvesting smaller bears. “They’re taking a lot more two and three year-olds instead of four and five (year old bears). There are less bears out there. The ones that live four or five years made it because they got smart.  We’re also seeing that bears are spending less time in the open, it used to be a bear would catch a fish and eat in the open, now they grab a fish and take off and eat it in the bushes.”

He said in the 1990s, it was common to spend 10 to 30 minutes watching a bear in the open. Bears are more cautious about being exposed, and now a bear will spend from 30 seconds to perhaps five minutes in the open. “In 2014 I didn't see a bear stay out five minutes,” he said.

He said the berry crop failed in a recent year, something others mentioned as well. That contributed to the problem. On the other hand, 2014 was a good year for bears. He said spring was early and bears were clear up in the alpine during hunting season, not on beaches. Westing said harvest was very low.

Pinquoch has offered several proposals to the Board of Game. One that passed a decade ago made it illegal to shoot a bear from a boat in Prince William Sound (GMU 6). Another proposal stated that if a hunter shot a sow he or she would be ineligible to hunt a bear in the area the following year.

“They shot that down,” he said. “I did it not so much to save those bears, but to educate people and make them target boars, to give legitimacy to regulation.” 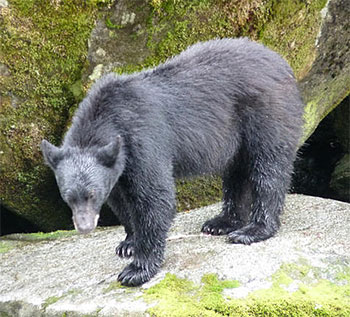 So what to do? In 2005 the black bear hunting season was shortened by 20 days, but harvest still climbed (the season was also shortened in 2009 with little effect). Westing is considering cutting it back again, from June 10 to the end of May, but said all that will likely do is concentrate the effort. She said shortening the season in the past did not result in a meaningful reduction in the harvest of females. She said she’s open to suggestions from the public. The Board of Game will meet in March, and she encourages participation in the meeting.

“I’m hoping the Board of Game will consider a change in the way we manage black bears,” she said. A harvest quota, shortening the fall hunting season, and moving to a registration hunt are possible options.

“Right now it’s a wide open opportunity,” Westing said. “Black bear hunting is always going to be popular in Prince William Sound, and a wide open system is not sustainable. Registration requires the hunter to declare where they are going to hunt, it’s an area-specific permit, and then after the hunt, they report effort, success, and other details. And unlike open general season, the manager knows who was out there and can follow up.”

Brown bears in parts of Alaska are managed with a bag limit – one bear every four years. For black bears in Prince William Sound, one bear every three years is a possible option.

The other goal is to launch some research projects. Hair snares or biopsy darts would provide DNA samples, which can be used to better understand the dispersal of bears as they  become adults, the relatedness between bears in an area, and compare how many of those “marked” bears show up in sealing data to determine the exploitation rate. That will help determine what level of harvest is sustainable.

Changes are coming, and Westing said she doesn’t want people to be caught by surprise.