Good News for the Farewell Bison 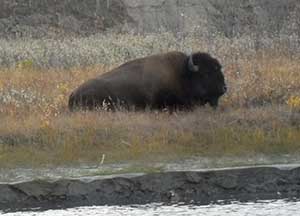 When wildlife biologist Roger Seavoy flew an hour south of McGrath this spring to survey bison, he found more than he’d seen in years – more than 400 animals. That’s good news for a herd that declined considerably a decade ago.

The Farewell herd is one of four herds of plains bison in Alaska. The herd inhabits the Farewell area of the drainages flowing into the Kuskokwim River, about 200 miles due west of Anchorage. Plains bison are an exotic species – they were introduced to Alaska in 1928, when 23 bison from Montana were brought to Alaska and released near Delta Junction south of Fairbanks. A herd established and as it grew, animals were culled to establish three more herds. Bison herds were established near the Copper and Chitina rivers; in the mid-1960s, 38 bison from the thriving Delta herd were released to establish the Farewell herd.

The herd grew over the years and hunting began in 1972, by the late 1990s the herd numbered about 350 animals. Between 40 and 80 hunting permits were issued each year. Then around 2000, bison numbers started dropping. Reasons for the decline included harvest, and especially decline in habitat quality as the 1977 Farewell burn grew up with less favorable forage for bison. When Seavoy flew his first survey out of McGrath as the area biologist in 2006, he found only 82 animals. He suspected there were more, and knew that he needed a tool to help locate the bison to get a better handle on how many more. 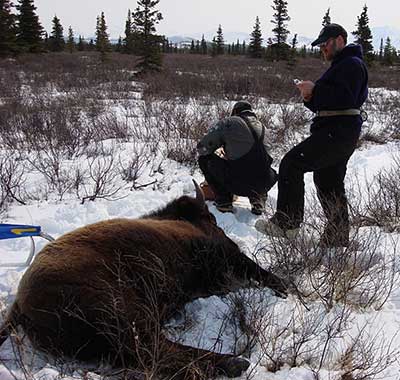 Biologists collar and process an immobilized bison, one of the Farewell Herd.

Today he has about 30 bison equipped with radiocollars.

“I love doing the spring survey with calves on the ground,” he said. “You fly until you hear a chirp from a collar, find a group of bison that has the one with the collar, count the number of adults, and calves, then circle it until you’re certain you found all collars in that group. Then you move on to next group. Once we find all the radiocollars we look for bison not associated with collared bison. If you have a good number of collars out there you find pretty close to what’s really there, and if you find a consistent number of bison, you probably are finding a pretty high percentage of them.”

This coming spring he and his assistant, Josh Peirce, plan to collar 20 additional bison. “The collars have been lasting a long time; we’re still using collars deployed in 2008. They advertise that they’ll last four years, but some can still be putting out a signal 10 years later. You can tell the batteries are weaker, but it’s still working.”

In 2007 Seavoy cut the number of hunting permits to 10 a year, five for a spring hunt and five for a fall hunt. He wanted to reduce the number of females taken to increase productivity, but because bull and cow bison are difficult to tell apart he didn’t want to simply eliminate cow hunting.

“The hunt is any bison, so we’ll lose some cows,” he said. “Bison hunters are novices by definition, you only get to do this once or twice a lifetime. I just don’t want to ask hunters in a wilderness hunt to determine sex.” 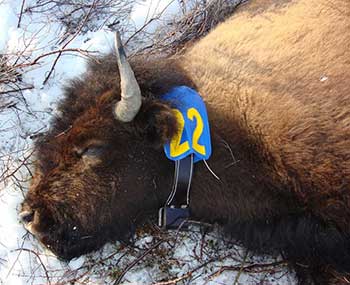 A collared animal before it's released.

By June of 2011 he could see numbers were increasing. He counted 200 adults and 61 calves. Reduced hunting pressure was just one factor.

“We had a fire that really helped us out,” he said. “In the summer of 2009 a fire smoldered between Roan and Farewell lakes (on the Iditarod trail). It smoldered all winter long and in early 2010 that thing blew up and it spread out into the real good bison range we have in the foothills. That summer with all the green up we had some good nutritious forage. Since then we’ve seen a really good progression of bison numbers increasing, now in June 2014 we counted 319 adults plus 85 calves.”

Fire is a natural part of that ecosystem – Seavoy calls it fire country – and the plant community is adapted to lightning-caused fires. The 1977 Bear Creek Fire in that area burned 345,000 acres, which likely contributed to the bison population increasing in the following decades. The 2010 fire will improve habitat for a variety of animals.

“Moose will probably benefit from that fire, too,” Seavoy said. “Part of the success is the reduced number of permits; we’re fortunate regarding the age structure (of the herd), with younger cows coming on line, and good habitat coming to fruition. The herd is poised to continue increasing, and if we get good weather we’re going to see more buffalo.”

Seavoy has increased the number of permits to 20/year. In 2013-14 when 10 permits were issued, hunters killed four bulls and two cows. 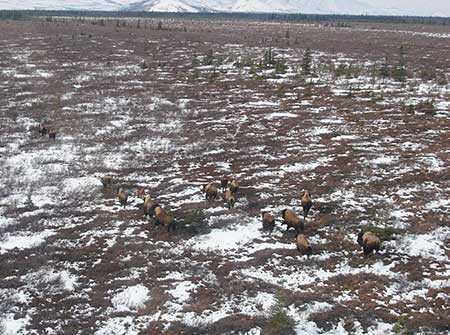 A group of bison in the Farewell area.

He’d like to see the population reach at least 300 animals, ideally in the 300 to 500 range. Part of having more animals is the need to maintain a minimum genetic diversity. “The thing about genetics, this herd was transplanted from the Delta Junction herd, and that one started from (animals from) the bison range in Montana. It’s a population bottleneck on a bottleneck. I’m a lot more comfortable now that we have a lot more bison.”

That makes the Farewell herd genetically valuable. That said, they are an exotic species.

“The wood bison is native,” he said. “It raises the question, how do you want to manage for an exotic – how much do you want it to expand? We’re doing the best we can for it.”

“The proposed location site for wood bison is hundreds of miles distant,” he said. “It’s well separated. We don’t want them to mix. They can interbreed, and we don’t want it.”