A salmon in Chester Creek. Salmon use a combination of talents to home in on their natal stream.

On a remote Southwest cape of Kodiak Island in 2013, the skipper of a commercial tender buying salmon from fishermen near the mouth of the Ayakulik River noticed something out of the ordinary. On one of the thousands of fish he sees in a season, a single fish, otherwise robust and healthy looking, had unusually large pupils. Curious, he set the salmon aside and sent it to a fishery biologist in Kodiak who forwarded it to the state’s fish pathology lab in Anchorage for disease testing. Interestingly enough, it was determined that there was nothing wrong with the fish except that it was simply born with extremely poor vision in both eyes. This salmon had been in the ocean for two years migrating with other fish. How did this salmon survive the vast expanse of the North Pacific Ocean and return to Kodiak Island as a mature adult without good eyesight? The answer is technology—fish technology! Salmon have developed an incredibly complex mechanism for navigating not only the freshwater but the marine environment as well, and a large portion has little to do with the eyes.

Throughout all stages of their development and movement through freshwater lakes and rivers, Chinook salmon, like all salmon, imprint on (that is learn and remember) smells and/or the chemical nature of their surroundings. Not only do they imprint on the smells of their freshwater environment, they also imprint on the smells of their ocean environment in the vicinity of their natal (home) stream. Due in part to this, salmon are able to migrate thousands of miles, taking advantage of the abundant food resources of the North Pacific Ocean and subsequently returning as a mature fish to the exact location they were spawned. This incredible homing instinct (ability to return to their original location) is inherited by all salmon. Even a salmon’s run timing (internal time mechanism that determines what time of the year they will return to the river) is inherited through their genetic makeup. 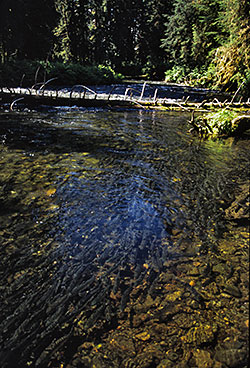 What’s not inherited by salmon is a set migration pattern. As salmon get farther away from their home stream, the smells they have imprinted on are simply too diluted to detect, especially considering the dynamic nature of the currents in the ocean. Recently, it has been discovered that salmon also imprint on the earth’s magnetic field that exists where they first enter the sea. While humans can’t sense the magnetic field that directs a compass, a salmon can detect minute variations in the field. In fact, other marine creatures that migrate long distances have demonstrated a unique ability for this, like sea turtles and blue fin tuna.

While the exact mechanism of geomagnetic homing by salmon is a mystery, it is thought the salmon’s lateral line (a sensory organ that runs down the side of the fish from the gill plate to the tail fin) has the ultra sensitive ability to not only detect magnetic variation but other things like vibrations and electrical current in the water. As salmon migrate and feed in the dark blue ocean, they sense minute variations in the magnetic field to determine their location. As if salmon weren’t fascinating enough, recent studies have shown slight natural movement (drift) of the earth’s magnetic field causes slight shifts in migration route of returning salmon! This evidence of variable migration routes by salmon originating from the same streams suggests that the salmon essentially have their own internal global positioning system (GPS) via the magnetic field. Not only do they know where they are, they know when they have to start back in order to return to spawn on time. While other cues to migration are likely incorporated by the salmon’s sophisticated navigation system, like temperature, tides, and the solar/lunar cycle, vision plays a small role compared to their other amazing senses. 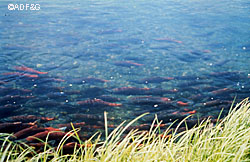 The truth is, the presence of a salmon having limited eyesight but still being able to migrate normally is probably not that unique, especially considering the abundance of salmon in Alaska. This one example demonstrates why the salmon is not only reliable and steadfast to its place of origin, but also adaptable to the constantly changing conditions of the climate, making it one of Alaska’s most sustainable and impressive resources