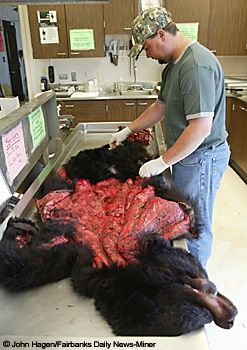 Tony Hollis, technician for the Alaska Department of Fish and Game, sealing a black bear.

Tony Hollis can tell a lot about a bear just by looking at its hide, teeth, nose and ears.

The big black bear that Roger Piek brought in on a recent morning, for example, had several scars on its nose, including a fresh one in the form of a small hole on the end of its snout.

"This one has been fighting this year already," Hollis said, examining the small wound. "It's pretty common to see scars on faces."

The same goes for rips in ears. Sure enough, Hollis found a piece missing from one of this bear's ears, though it had healed over.

"See this chunk missing here?" he said, running his fingers over the edge of the bear's ear.

Then Hollis turned his attention to the bear's mouth. While Piek estimated the bear's age at 6, Hollis said it was considerably older.

As a wildlife technician and head bear sealer for the Alaska Department of Fish and Game, Hollis gets to check out his fair share of bear hides and skulls.

Hunters who shoot a bear anywhere along the road system are required to bring the hide and skull in to be "sealed" within 30 days of the kill. The seal consists of two small, red numbered metal tags that are attached to the hide and skull. The seals must remain in place until the hide is tanned and the skull is boiled.

The requirement allows Fish and Game to keep track of bear harvest and hunting pressure along the Interior road system, where most of the region's hunting takes place.

"It's our one and only way of knowing what the harvest is because (hunters) don't need a harvest ticket," Hollis said.

It only takes Hollis 10 or 15 minutes to go through the entire process but he gathers a wealth of information in that short time.

Fish and Game also is able to determine the sex and ages of bears through the sealing process. Hunters are required to leave evidence of sex on the hide and a tooth is pulled to age the bear. That information is used to determine composition of males and females in the harvest.

In addition to evidence of sex, Hollis also checks for any indication that the bear has been captured by state or federal wildlife biologists, such as ear tags or tattoos.

The sealing process also gives Fish and Game an idea where hunting pressure is directed. Hunters are asked where they hunted, how they got there (i.e. four-wheeler, foot, boat, airplane, horse, etc.) and if they used bait.

The hunter, Piek, said he just got lucky. He had hiked two miles to a friend's bear bait stand off the Steese Highway and was about to shoot a smaller bear when the bigger one showed up.

"This one charged him right off the bait, it was pretty cool," said Piek, who shot the bear with a .338.

With a skull measuring 194/16 inches, Piek's bear was one of the biggest sealed by Fish and Game this spring. The hide measured 6-feet, 7-inches.

Ian Martinez also showed up that day with his 4-year-old son, Tanner, in one hand and the hide of the black bear he shot early Saturday morning in the other.

He carried the hide in a green, military laundry bag and had the skull in a gallon-size Ziploc baggie. The skull was frozen, which would make it hard to open the mouth up to remove a tooth.

"I'll put it under hot water and see if I can soften it up," Hollis said.

Asked how big the hide was, Martinez said he and his friend had measured it about 41/2 feet.

"Oh, she's bigger than that," Hollis assured him.

Martinez's eyes lit up. "You think so?" he asked eagerly. Hollis' measurement came out at 5 1/2 feet.

It was the first bear that Martinez, a 28-year-old infantryman at Fort Wainwright, had ever shot.

"I was shaking in the tree stand for a good 15 minutes after I shot it," he said.

After Hollis checked Martinez's hunting license, he asked him the routine questions and also asked him if he salvaged the meat. He had.

"How does bear meat taste?" Martinez asked Hollis, adding that he planned to get most of it made into sausage or burger.

"You ought to keep one steak and throw it on the barbecue," Hollis suggested. "You'll be surprised."

Martinez asked him how much it would cost to get a rug made. Hollis told him it would probably be about $700 to $800 for a bear that size.

Martinez couldn't believe it when Hollis told him his bear probably weighed only about 150 pounds. It took him and a friend 2 1/2 hours to carry it a mile back to the road after lashing it to a pole, Martinez said.

But then, most hunters tend to overestimate the size and weight of their bears they shoot, Hollis said.

"Normally they're all six-footers," Hollis said with a grin. "They're all about 100 pounds heavier than they actually are."

This article appeared in the Fairbanks Daily News Miner and is reprinted by permission. Thanks to Tim Mowry. News-Miner outdoors editor Tim Mowry can be reached at tmowry@newsminer.com or at 459-7587.