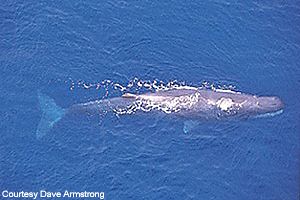 A sperm whale surfaces in the South Pacific. Sperm whales are found worldwide, and in recent years Southeast Alaska longline fishermen have had a number of encounters with sperm whales in the Gulf of Alaska. Photo courtesy Dave Armstrong of Kaikoura

Fisherman Sean Tracey was working aboard the Connie M when the big sperm whale surfaced and settled in next to the boat. The 50-foot whale rested against the 42-foot fishing boat while three smaller whales picked black cod off the longline gear.

"That one didn't ever dive, he just hung out while the others were eating," Tracey said. "It was just sitting at the surface, lying right up against the boat. I was cleaning the deck and I touched him with the broom handle, then I started scratching him with the deck brush. He was really dark charcoal gray, almost black."

It was amazing to see a sperm whale within arm's reach, Tracey said, but the crew of the Connie M was not happy about losing fish. Tracey said the whales took about a third of the black cod they brought up that day in the Gulf of Alaska northwest of Sitka.

"They've gotten smart. You turn on the hydraulics to operate the gear puller and it's like the dinner bell," Tracey said.

Encounters with sperm whales have left fishermen such as Tracey with a mixture of awe and frustration. Longline fishermen targeting black cod (also called sablefish) in the Gulf of Alaska have encountered sperm whales with growing frequency over the past decade.

No one knows how many sperm whales inhabit Alaska waters. They are deep-water, open-ocean whales and are found throughout the world - killer whales are the only other whale so widely distributed. Males and females form separate groups as adults, females and young usually remain in tropic and temperate waters year-round while males are thought to move to northern waters -such as the Gulf of Alaska and the deeper waters of the Bering Sea - during the spring and summer. Males reach 50-feet in length and females average 36-feet.

Close to 1,000,000 sperm whales were killed worldwide by commercial whalers between 1947 and 1987. Sperm whales are listed as an endangered species, but actual population size is unknown - guesses range between 200,000 and 1,500,000 animals worldwide. There is evidence that some populations of sperm whales have been growing since sperm whaling halted.

Interactions with fishermen in Alaska waters are certainly increasing. There have been no injuries to the whales, and fishermen have not been forced to quit fishing, although some are spending more time, fuel, bait and money to work around the whales and catch their quota of black cod. Fishermen, working with marine mammal biologists, have been documenting the impact of the whales to gain an accurate picture of this phenomenon.

Ernie Eggleston has fished out of Pelican since the mid-1970s. He first encountered sperm whales in 1986 and he's seen them almost every year since, most recently in April. Over the years he's come to recognize one group of four or five whales, particularly one large, distinctive, scarred whale. He doesn't consider them a problem, although occasionally they do eat black cod off his fishing gear.

"They don't seem to be afraid - they come close to us when we're fishing," Eggleston said. "They get right next to the boat, on the surface. Sometimes they're not interested in our gear; other times a bunch of hooks are straightened out and they've eaten the fish." 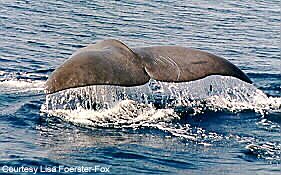 A sperm whale shows its flukes as it dives in the North Atlantic. Courtesy Lisa Foerster-Fox of the Center for Oceanic Research and Education.

In longline fishing for bottom-dwelling black cod, hundreds of short leaders, each bearing a baited hook, are fastened to a long ground line that is lowered to the sea floor. Each end is attached to a marking buoy and the line is left to "soak." After several hours the set is picked up and winched aboard, hauling in a catch of fish weighing seven-to10-pounds apiece.

Tracey said the day the sperm whales showed up, they brought up a lot of fish heads.

"These great big whales bite off these little fish perfectly, right at the head," he said. "It's like a grapevine. They're plucking grapes. All the way from 200 fathoms (1,200-feet). If you have a fish even every fifth hook, you can imagine how many fish are suspended off the bottom."

Eggleston said it seems to him that sometimes a whale will strip a section of the 3/8th-inch ground line by running it through its mouth.

"Sometimes they're not nipping the fish, but something else, the hooks are all straightened out," he said. "I think they go down the line with the gear in their mouth, although the line isn't frayed."

In some cases, the first sign of whales is a tightening of the main fishing line as whales begin feeding off the gear. In other cases, whales show up as soon as the fishermen haul anchor, apparently tuning in to the sound of the hydraulic motor.

Mike Sigler, a biologist with the National Marine Fisheries Service in Juneau, has kept tabs on the sperm whale situation since the 1980s. Early on, he said it seemed the whales were simply following boats and feeding on the discarded offal and fish waste. That's still the case today about half the time sperm whales are around longline boats. The other half of the time, fishermen see straightened hooks and mangled and partial fish - evidence the whales are getting into their catch.

"Sometimes they don't take fish, but when they do, they can get about a quarter of the fish," Sigler said.

Sitka whale biologist Jan Straley has begun studying these interactions between sperm whales and fishermen in the Gulf of Alaska. She stressed that fishermen report a gamut of experiences - whales are present but not interacting with fishing activity, they approach some boats more than others, they hit one set and not the next, and they have different feeding strategies.

"We have all these different stories," Straley said. "What are the similarities and differences?"

The North Pacific Research Board has granted about $185,000 for a project to study these interactions. Straley hopes to learn how many vessels are affected and where and when interactions most often occur, how many whales and specifically, which animals are involved, and what their patterns of behavior and feeding strategies are.

Straley and her colleagues will be working with fishermen, fisheries managers and other scientists to develop possible solutions to lessen the impact on fishermen and prevent any potential harm to the whales.