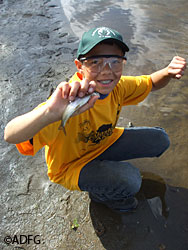 A young angler in the 2011 Alaska Conservation Camp.

“You have no idea how much it changed his life. He’s a new person. He has an interest in hunting now and he teaches us about safety and he asks us to go fishing and camping. He’s been asking all year long about going to Advanced Camp this summer. I think every kid out there should go to these camps. Thank you, thank you, for having this.” — Parent of a youth camper who attended the Alaska Conservation Camp - Basic Camp.

The enthusiasm, joy and appreciation expressed by this parent really captures the purpose for the Outdoor Heritage Foundation of Alaska (OHFA). OHFA is the official foundation of the Alaska Department of Fish and Game (ADF&G), the nonprofit corporation at work behind the scenes to fund more than a dozen different Alaska outdoor education programs including: Becoming an Outdoors-Woman, the Alaska Conservation Camp in Fairbanks, Outdoors Youth Days in Anchorage, youth and adult shooting clinics and leagues, and the American Wilderness Leadership School. OHFA is also integral to the ADF&G National Archery in the Schools Program and Hunter Information and Training Section, which together brought more than 285 classes to more than 6,400 students last year. OHFA also provides facilities support for the Rabbit Creek Shooting Park.

The primary purposes of the foundation are to:

The OHFA of today evolved from a subgroup of the Alaska Fish and Wildlife Conservation Fund called the Hunter Heritage Foundation (HHF) that operated under a memorandum of understanding with ADF&G. HHF provided funding from outside the department to support a youth shooting league at the Rabbit Creek Shooting Range in Anchorage beginning in 1994.

It was the same year that Cathie Harms, ADF&G biologist with a background in education, walked into her office in Fairbanks and found a Becoming an Outdoors-Woman (BOW) planning guide on her desk that another employee had picked up at a conference.

“I was absolutely offended when I saw that guide sitting on my desk. I was not someone who took women’s studies, or thought there should be any kind of special treatment or training for women,” she said. “It was a matter of pride – you were supposed to make it work, try to fit in, grit your teeth and get the work done.”

Luckily, she read the first couple of pages in the guide rather than storm down the hall. She said the BOW guide outlined the nation’s high divorce rates and the number of women raising kids on their own. It described how many women were not taught these skills as kids; how as adults, sometimes their partners weren’t the best teachers; that the available men’s gear and equipment didn’t fit or work well for their size or build.

“The BOW guide also talked about the differences in the way men and women learn and I thought, this isn’t about building walls between men and women, it’s a way to provide women with hunting, fishing and outdoor skills in a way that’s enjoyable to them, and so that they can pass it on to their kids!” 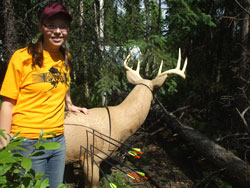 An archery student at the 2011 Alaska Conservation Camp.

That year she attended a BOW workshop in Wisconsin where she received onsite coordinator’s training. She came back ready and raring to provide the program to women in Alaska. She learned that most states partnered with a nonprofit, so she approached HHF. In 1995, in collaboration with HHF, she offered the first BOW workshop in Alaska. That was the beginning of what is now one of the state’s most popular adult outdoor education programs with nearly 30 workshops or clinics offered annually.

It was also an important transition for HHF.

“The Hunter Heritage Foundation began as a loose-knit volunteer group that operated through a memorandum of understanding with ADF&G,” remembers Eddie Grasser, OHFA President. “After the BOW program got going, Cathie was nominated to the HHF board and we also began expanding our efforts to include other educational endeavors.”

As HHF got bigger, members had to raise more money, follow more rules, and fill out more forms for the IRS. Their operating costs also increased to cover liability insurance and expanding administrative functions to keep up with all the paperwork and accounting. Finally, in 2007 the foundation board members incorporated the Outdoor Heritage Foundation of Alaska as an Alaskan nonprofit organization, and applied for 501(c)(3) non-profit status. The change in name reflected the broader spectrum of education classes and programs they were supporting.

The foundation’s business, property, and affairs are managed by an all-volunteer Board of Directors, some of whom are officers (President, Vice President, Secretary, and Treasurer). According to the bylaws, members of the board must be dedicated to conservation and education and must include leadership from ADF&G, major contributing hunting and sport fishing conservation organizations, commercial fishing interests, and businesses or Alaska Native Organizations that have demonstrated financial commitment to conservation and traditional uses of fish and wildlife.

The OHFA/ADF&G partnership, like many state fish and wildlife agencies, is a symbiotic relationship. OHFA education programs are coordinated and operated by ADF&G employees who are paid by the department, but the joint education program finances are handled by OHFA. Without OHFA, donations or tuitions collected would be required to go into the State of Alaska General Fund. It would be difficult if not impossible to direct those funds back into outdoor education programs. Conversely, OHFA is able to collect tuition and donations and deposit them directly into an account to fund education programs and budgets approved by their board. In addition, OHFA is able to hold raffles, conduct fundraising events, and solicit financial support from businesses and organizations, all of which ADF&G cannot undertake. 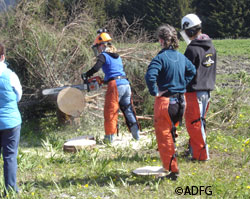 The chainsaw class at the Southeast Alaska 2011 Becoming an Outdoors Woman event.

The current OHFA board has raised over a million dollars in the last five years with 81% of those funds going directly into outdoor education programs. The other 19% covers administrative costs and expenses. Eddie Grasser is the OHFA Board President and chief fundraiser. His goal is to have a five million dollar endowment within eight years to enable a secure and sustainable future for outdoor education programs in Alaska through OHFA. His passion behind serving as President of OHFA and volunteering an average of 20 hours a week is based on a long career in the outdoors.

“I was a territorial baby (born in Alaska before Statehood) that grew up in the outdoors,” he said. “As an adult, I had a fishing lodge and was a hunting guide until I finally retired in 1994. I made a living from guiding and did well. Fish and wildlife have provided for me and my family and this is a way to give back to Alaska’s resources.”

But it’s the cultural shift in today’s youth that is the biggest impetus for his OHFA involvement. “Kids are not going outdoors anymore,” Grasser said. “It’s not as important to our modern culture, which could have dramatic impacts. We have a user-pay system – hunting and fishing licenses help fund fish and wildlife management, so fewer users weakens our ability to carry out important management and conservation programs.”

Less interest in the outdoors and in fish and wildlife also means fewer people likely to pursue degrees in biology and conservation-related jobs. Eddie said that he feels that his OHFA efforts are important for ensuring a strong professional fish and wildlife work force at ADF&G in the future.

Cathie Harms, currently the OHFA Vice President, concurs that it’s education programs and ADF&G’s outlook that keeps her involved. “To me, it’s really gratifying to watch a kid catch their first fish, or have someone who was terrified of guns learn firearm safety and shout with joy when they hit a target. These programs change the way people feel about fishing, hunting and wildlife recreation activities.”

Harms believes that OHFA programs are also one of the most effective ways that ADF&G has for engaging people and imparting positive regard for department efforts. “Our job is to manage fish and wildlife for Alaskans,” she said. “To do that, we obviously have to deal with people. These programs are one the best things we do in terms of teaching people about the resource, habitats that sustain the resource, and how to safely use and enjoy the resource. That kind of engagement results in stewardship and a personal commitment that not only helps ensure its future, it also imparts a new respect for what the department does.”

Grasser describes the OHFA/ADF&G partnership as an outstanding story with a history of success. “It would not be possible without a dedicated board, staff at ADF&G, and the major sponsors from the conservation and business community.”

Harms also underscored the importance of support for OHFA. “If folks want to get involved, learn more about the OHFA programs, sign up for a specific outdoor program, or make a contribution that will make a difference in the future of Alaska’s fish and wildlife resources, please get in touch with us through the OHFA website.