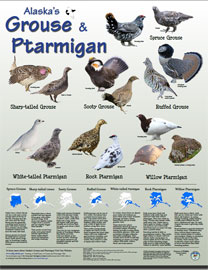 Small game hunters and bird watchers have a new tool to help them identify Alaska’s grouse and ptarmigan. The seven popular game birds are featured on a new full color, 18 by 24-inch poster. They are free at a number of Fish and Game offices, but due to the cost of mailing tubes and postage, posters will not be available by mail.

Rick Merizon, the small game biologist for ADF&G, spearheaded the project. In late April, between a trip Coldfoot to conduct ptarmigan surveys and another trip to the Delta Junction and Anderson area for grouse surveys, he talked about the project.

“We wanted to raise the general awareness about what game birds we have in Alaska,” he said. “We get a lot of questions about identifying birds in hand, especially ptarmigan. Someone will say, ‘I shot some ptarmigan but I don’t know what kind.’”

Alaska is home to three ptarmigan species - white-tailed ptarmigan, rock ptarmigan and the state bird, willow ptarmigan. Grouse include spruce grouse, sharp-tailed grouse, sooty grouse and ruffed grouse. The poster features photographs of male and females of each species, range maps, and descriptions of the birds and their preferred habitats. 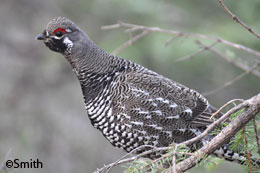 Merizon consulted with a variety of biologists and read as much of the literature as possible. “Some people may know a lot about ptarmigan, but not grouse,” he said. “Or they know a lot about certain areas. But there are still so many unanswered questions, especially when it relates to Alaska. There’s been a lot of ruffed and sharp-tail grouse research in Lower 48, but not a lot in Alaska.”

One area that could use more research is identifying just where in Alaska the birds are found and the extent of their ranges.

“The biggest thing for me was understanding the range maps and making them as accurate as possible,” Merizon said.

That point was emphasized a few days earlier as Merizon left Coldfoot. He saw a sharp-tailed grouse just south of town – about a hundred miles further north than range maps indicate for the species.

“There is still a lot to learn,” Merizon said. 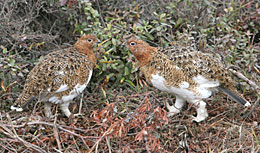 A pair of ptarmigan

Fish and Game's education staff executed the project. ADF&G educator Elizabeth Manning helped, and Fairbanks-based education specialist Mike Taras wrote the text, created the maps, collected the images, did the graphic design and supervised the printing. Taras faced an odd challenge designing the poster. He needed to isolate the birds from the backgrounds in the photographs so they could be featured on the poster. He used Photoshop, but the program couldn’t distinguish the birds from their surroundings.

“Those ptarmigan are so cryptic, in summer or in winter,” he said. “They look so much like the background, they are so camouflaged.”

Posters are free and are available at Fish and Game offices in Douglas, Anchorage, Fairbanks, Palmer, Delta Junction, Kotzebue, and Bethel. A PDF is online on the new improved small game webpage and can be downloaded and printed.