A short cast behind me, David Hagen, my pal of 30 years and uncounted fishing and hunting trips, threw a half-hitch into a rope connecting his floatplane to a spruce onshore. We had left Anchorage that morning on a lark, David weaving his Maule four-seater through narrow, rocky Portage Pass with no hard destination in mind. Besides our fishing vests and a couple of fly rods, we had all we needed in a topographic map, a hunch or two, and a bird’s-eye view of one of the planet’s last, best temperate wild regions.

It was one of those hunches — that any freshwater system connected to the sound’s rich tides would be a likely haven for salmon, char and possibly trout — that led us to our lake. Set in thickly forested hills a half-mile from salt water, it was large enough to land on and linked by a stream to the sea. So now, barely an hour from home, I stood knee-deep in a fisherman’s paradise, surrounded by wilderness, water, and scores of finning Dolly Varden.

Dollys are predators, so I chose from my fly box a Muddler Minnow, tied it onto a light tippet, and started casting. David, now rigging his own rod, paused to watch as my fly plopped into the lake outlet and sped off with the current. Instantly, half the school broke away, whirling in unison like a living cloud, and lunged for the streamer.

Thump! The strike was electric. I hauled back to set the hook and received a sharp tug in return. For an instant the world melded into a blur of sunlight, amber water and, as if from somewhere far away, David shouting encouragement before vanishing into the brush to explore waters downstream.

Dolly Varden tend to strike hard, then run deep, bulldogging stubbornly before surrendering in a series of peculiar spins. This one, however, fought differently. There had been the initial hammer-blow strike, followed by a peppy run and three or four shaking leaps. The departure was refreshing.

Eventually though, the fish began to tire. Its runs weakened, becoming shorter until I was able to lead it in, take it gently in my hand — and discover the 16-inch-long sprite staring back at me was no Dolly. The metallic-purple gill plates, honey-tinted flanks and scarlet stripes under each side of the jaw were hallmarks of a Prince William Sound enigma. The fish in my hand was a cutthroat trout.

So what constitutes the perfect Alaska fishing trip? Ask a dozen anglers from around the state — Anchorage, Petersburg, Dillingham, Fairbanks — and see how many answers you get. Is location the key? Catching a lot of fish? Big fish? It’s a slippery question.

One autumn many years ago, I spent a week with friends floating the Goodnews River northwest of Dillingham. Late one evening, with the rest of camp gone to bed after a long day of rafting and fishing, I was left alone with the river. The current’s volume seemed to increase as daylight faded and, cued by fresh snow topping the hills nearby, flights of southbound ducks winged low overhead. 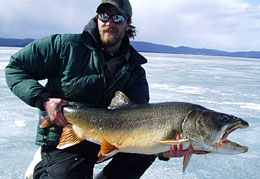 For some anglers, winter is prime fishing season. Corey Schwanke with a beautiful lake trout caught through the ice.

From a gravel bar near the river’s center I found an eddy so rich in bright silver salmon that every cast drew a strike. All I had to do was drop a Battle Creek Special into the eddy’s head, let it drift into the sweet spot, and — POW! — a salmon would wallop it. From there the silvers would tear downriver, leaping and dancing in the darkness. You couldn’t see them, but you could hear them splashing and feel their heaviness and insane energy telegraphed through the line.

The trip was not perfect, but it was well timed; fishing was good every day. Still, that evening remains most vivid because perfect moments are rarities that never lose their luster.

Forty fathoms beneath the charter boat T. Rex, in the murky depths of Montague Strait, the cargo pilot’s short, stubby saltwater rod seemed suddenly possessed. It bucked and wrenched and bent perilously over the gunwale. The veins in his forearms swelled, sweat beaded on his brow.

Framed by the cabin door, the skipper smiled broadly, his lower lip fat with a double dip of snuff. “Don’t rest your rod on the rail,” the skipper coached. “Lift up, keep pressure on the fish.”

The cargo pilot, taking a day off from his job in Anchorage, strained to lift his rod. The rod writhed. He grunted. And then his line fell curiously slack.

By the tone of his voice, it was hard to tell whether he was disappointed or relieved.

The skipper spat over the side.

The cargo pilot lifted the rod and gave the reel a couple of cranks. Then the rod tip shot abruptly down, forcing him to stop reeling and hang on.

“Take advantage of it when (the fish) lets up,” the skipper said.

After that, the cargo pilot got into the rhythm of the battle: Pull up, up on the rod, then lower the tip and reel fast. Repeat. That is how a saltwater angler gains on a strong fish. Pump and grind, pump and grind. Three feet … of line … at a time.

Ten minutes and 235 feet of line later, as the cargo pilot strained against the bouncing rod, the white bottom-side of a halibut flashed below the boat. The skipper snatched his heavy gaff from its holder and, leaning dangerously over the side, hooked the fish by the jaw.

At that instant, a new fight was on. The halibut thrashed, splashing saltwater onto the deck and pounding its tail against the side of the boat. The skipper hung on, like a bull rider on a crazed Brahma. Then, with the grace of a seasoned professional, he hauled the fish smartly over the side and onto the deck.

A couple of thumps between the eyes with an aluminum baseball bat and the fish fell still.

The cargo pilot beamed. He’d only been fishing 20 minutes. The day had just begun.

Halibut are the anti-cutthroat. Where the diminutive trout are creatures of poetry and color, halibut are big, broad, mud-colored lugs with close-set eyes situated frog-like on the tops of their flat, fat heads. They fight with impressive strength on the far end of a line and their delicately flavored white fillets are the fare of high-end restaurants. Halibut in Alaska waters grow huge — the state sportfishing record stands at 459 pounds — and are rightly considered big game.

We stalk them by boat, often traveling miles out to sea, armed with rods thick and flexible as flagpoles, and harpoons with detachable heads tied to buoys (a la Jaws). Big halibut brought to the surface may be struck with the harpoons or shot with .44 Magnums or .410 shotguns. The fish spend their lives lying flat on the sea bottom; to reach them, you may need five pounds of solid lead. A steel hook large and stout enough to hang a 130-pound moose haunch is required to hold them. For bait you might use a herring the size of trout caught and released in Prince William Sound streams. Or you might use a three-pound pink salmon. 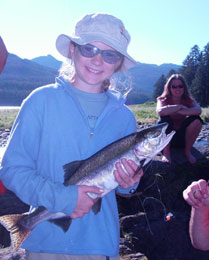 A few minutes after catching the first halibut of the day, the cargo pilot caught his second fish — a 45-pounder.

“That’s the best I’ve ever done,” he announced. His limit secured, he sat down to relax and enjoy the late-morning sunshine.

One by one, fish came to the baits of the other four T. Rex anglers. One man from Minneapolis was experiencing his first Alaska fishing trip. When he hooked and brought to the boat a 35-pound halibut — considered small in local waters — the skipper asked if he wanted to keep it. Still holding his rod, the angler turned to his mates:

The angler, whose biggest fish prior to that were walleyes pulled from his Minnesota lakes, later rounded out his halibut limit with a fish that weighed close to 50 pounds. Joining the cargo pilot, he sat down and looked over the flat-calm seas. To the north, the jagged peaks of a nearby island were silhouetted against warm blue skies. Here and there a salmon leaped. Puffins paddled by.

“You know what surprises me,” the angler said, “is that we’re not surrounded by other boats. I thought there would be other boats, but I haven’t seen another one all day.”

Mostly, the best fishing trips simply happen, spontaneously, like the weather or a mood that settles over you abruptly for no clear reason. They come as surprises, appear from out of nowhere, like shiny trout in coastal streams at the extreme edge of the species’ range.

My day on the Prince William Sound stream last August was all about spontaneity. When I’d opened my eyes in bed that morning, I’d had no idea I was a couple of hours — one bush plane flight and a mountain range or two — away from a fishing adventure on pristine water. Yet there I was, still thinking of that cutthroat trout as I wrestled from the lake outlet one fat Dolly Varden after another.

I would have been content to stay there, catching fish after fish, but soon the little walkie-talkie I carried in my fly vest crackled. It was David. Come quickly he said. Follow the game trail on the west bank. He’d found a bonanza of salmon in the estuary only 15 minutes downstream.

The events of that day have since crystallized into a collage of sunlight and shadow, hemlock and spruce, salmonberries, blueberries and the shocking power of ocean-bright sockeyes leaping and running, tearing line off our reels and etching memories in our heads. Of course, there were the Dollys, too, more of them than a guy with a fly rod could catch in a day — or maybe ever — and two or three more brilliantly hued cutthroat trout that struck our streamers and skipped over the riffles like living jewels. In the end, such images are all that linger of any fishing trip. Probably, they’re all that truly matter.

One summer in the 1960s, when I was a boy learning to pan for gold in the Klondike, a grizzled miner taught me the difference between fool’s gold and the real thing. Cup your hands around your find, he’d said, and view it in the shade. True gold keeps shining. The other stuff turns to sand.

What constitutes the perfect Alaska fishing trip? Silly question. Or maybe it’s profound, like a Zen koan, where the answer eludes the mind and is known only to the heart.

Ken Marsh is Regional Information Officer for the Division of Sport Fish in Anchorage. He is a freelance writer, author of the book Breakfast at Trout’s Place: The Seasons of an Alaska Fly-fisher, and a lifelong Alaskan.