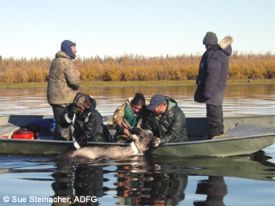 White Mountain Junior High’s ‘Caribou Year’ ended with a huge round of applause.

Caribou biologists from Alaska, Canada, Greenland, Finland, Norway, Sweden and Russia attended the Tenth North American Caribou Symposium in Girdwood, Alaska - but it was the kids from White Mountain that brought down the house.

The entire White Mountain Junior High class, together with their teacher, Chris Brown, and Jim Dau, Fish and Game’s wildlife biologist in Kotzebue, recently gave a joint presentation on the value of involving communities and kids with a caribou collaring project and management.

The Bering Strait School District has encouraged teachers to build curriculum around a locally relevant theme. Last fall, Brown chose caribou as the theme for his class of seven. His students were invited by ADF&G to participate in the annual caribou collaring project on the Kobuk River. They learned how to work from small boats to capture and restrain swimming caribou, and attach radio and satellite collars. 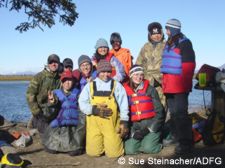 The week-long experience was followed by classroom projects developing graphs and charts based on harvest assessment numbers. Students wrote about their experience handling live caribou, and the articles were published in local newspapers and on the ADF&G website.

The students also joined local hunters on a caribou hunt, learning how to stalk, shoot and butcher a caribou. Each student prepared a caribou dish and the class hosted a caribou potluck for Elders. Afterwards, the entire community was invited to view the computer-based presentations the students had created on their year of caribou studies. 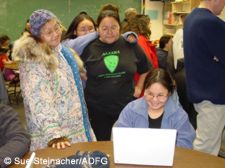 Michelle Lincoln demonstrates the computer show she developed to interested members of the White Mountain community.

The trip to Girdwood was the culmination of the student’s ‘Caribou Year.’ While the audience of several hundred biologists sometimes stifled yawns during presentations on genetic variations and statistical analyses, they leaned forward eagerly as the students described the collaring process and what they had learned about caribou. The applause that followed was the most enthusiastic of the three-day event, and the conference hall buzzed with comments on how the students’ presentation had been the highlight of the symposium.

And as the caribou begin their yearly trek north, so the White Mountain students move forward in their life and studies, enriched by what they learned from the caribou.