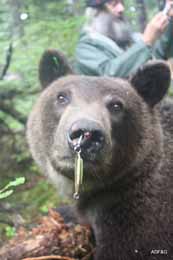 This cub snagged himself on this Pixie spoon fishing lure when rooting around in a tackle box. The bear cub was given an immobilizing drug so biologists could remove the hook.

HAINES -- It took Fish and Game biologists about five minutes to remove the treble hook of a Pixie lure from the nostril of a brown bear yearling last week.

"I pushed in and backed it out, just like you would a hook in a fish's mouth. It came out real easy," said Anthony Crupi, assistant area biologist. "I'd been out fishing with my son last weekend, so I'd been practicing."

Crupi's crew tranquilized the bear -- and the sow that was protecting it -- near bear beds not far from the Chilkoot River, where the cub got snagged Aug. 10, apparently after rooting through a tackle box.

Fishing lures stuck on brown bears aren't uncommon along the Chilkoot, where each fall about 18 bears share the river with anglers and bear-watchers. The sow with the cub had a Pixie on its hindquarters last week, the biologist said.

Lures typically fall out of bear hides, but close-up photos of the cub gave reason for concern, Crupi said. "All three barbs were in the nostril and (the points) had poked through the outside of the nose. It would have clearly not come out on its own. And it was starting to get infected."

Wildlife biologist Anthony Crupi removes the hook from the bear's nose with the help of LaVern Beier.

Crupi used wire cutters to cut the first hook and fishermen's forceps to free the other two. He gave the bruin an injection of Bio-mycin, a wildlife "penicillin," and put a topical antibiotic on the punctures.

Other than having the hook, the cub born last year weighed 160 pounds and was in "great condition," he said. The cub was up on its hindquarters about three hours later and was seen with the sow on the river the next day.

Crupi said he's previously seen lures stuck on tops of bears' noses and on their front and back legs.

"At times I've seen (fishermen) casting at bears to try to get them to leave," Crupi said.

He advises anglers there to keep their gear and catch close: "Keep all your equipment and fish with you. If a bear's approaching, retreat to your car and take all your stuff with you."

Crupi has been watching bears along the Chilkoot for 11 years, including a pioneering study of the population there a decade ago. The hooked bear is one currently being studied by the state and has a tagged ear. 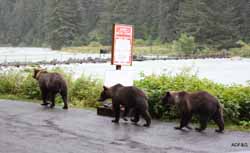 The bear family the next day, about 19 hours later.

Crupi said bear-human encounters have "drastically improved" since the state stationed a "bear monitor" along the river. "But we continue to see the same problems year in, year out in terms of conflicts between bears and fishermen and bears and bear viewers."

Without 24-hour monitoring, it's difficult to control crowds at the river, he said. A planned bear-viewing platform at Chilkoot will help by giving bears "predictable human activity" and should allow them to travel more freely, he said. "It allows them to interact with people and other bears in a more controlled fashion."

A robust pink salmon return to Chilkoot equates to a lot of bear activity there this fall, he said. "Every year things fluctuate. This year is a super-strong pink run."