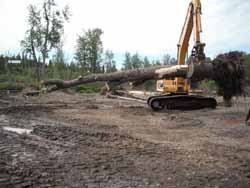 Moving a cottonwood root wad into place as part of the river restoration project.

An abandoned gravel pit and residual berm “captured” a portion of the Anchor River in a flood in 2002 causing problems for the river’s aquatic inhabitants including all five species of Pacific salmon. The Kenai Watershed Forum (KWF) stepped in and restored this section of the Anchor River to a more natural and fish friendly state in July.

The restoration site is located south of Anchor Point adjacent to the North Fork Road. The gravel pit began operation in 1984 and ceased activity by early 2000. The pit encompassed six acres with one edge only 100 feet from the Anchor River. Several berms were constructed to accommodate the overburden, vegetation, and fine sediments. The largest berm was acting as a levee. The State of Alaska, Department of Natural Resources, purchased the property with Exxon Valdez Oil money in an effort to prevent further changes to the Anchor River watershed.

Fall rains in 2002 inundated the Anchor River with flows seen only once in a 100 years. The current pushed the flow into the floodplain, breached the levee, and water flowed into the gravel pit. A new channel was created. Another high water event in 2007 caused a logjam to give way rerouting the majority of the flow into a small side channel. This new channel funneled the thalwag of the river directly into a berm creating erosion and causing sediment to infiltrate the river. Other impacts included potential stranding of juvenile fish in the braided areas during low water, loss of riverbank vegetation needed to protect juvenile fish, and faster flows not conducive to rearing juvenile fish and spawning salmon. In addition, the river was no longer connected to its natural channel and floodplain.

The U.S. Fish and Wildlife Service hired KWF to assess human-caused impacts on the Anchor River. After analyzing aerial photographs they pinpointed an area – the breached gravel pit – where they thought they could make a difference. KWF received a federal grant to realign the affected portion of the Anchor River. Their goals included: clear trees and cover the downed timber before migratory birds arrived; conduct in-water work during the fish window – May 15 to July 15; construct a temporary bridge to minimize stream crossings; reroute the gravel pit channel with meanders including pools and riffles; reinforce the riverbanks with native vegetation and root wads; and reintroduce a floodplain.

Throughout the construction, Fish and Game Habitat and Homer Sportfish staff were on site to guarantee Best Management Practices, such as erosion control fencing, were implemented. Robert Ruffner, KWF’s executive director, and the project engineer lived on site to oversee the project and ensure timelines were met. Construction began with the installation of erosion control devices and temporary bridge on June 27. A river channel was temporarily diverted with enough water flowing to allow rescue of stranded fish. A new channel was shaped, proper grade was established, and the riverbanks were fortified with root wads and willow cuttings. Finally, the river was rerouted to its new channel. 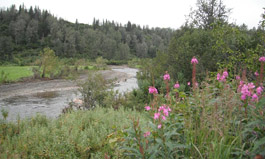 On a site visit, July 18 just after project completion, this author was very pleased with the outcome of the project. The temporary bridge had been removed and erosion control barriers such as trenched silt fencing and compost logs were protecting the river. The root wads and planted willows along the riverbank appeared functional, natural vegetative mats were transplanted, and the area had been seeded. Most importantly, schools of juvenile fish were observed in pools, and a brightly colored Chinook salmon was swimming through the riffles. Fall rains will test the new section of the Anchor River and some fine tuning may be needed; however, after nearly 10 years the river has finally returned to a more natural and fish friendly course.

Goodbye gravel pit - a river no longer runs through it.

Patti Berkhahn is a habitat biologist for the Kenai Peninsula with Fish and Game in Soldotna, based out of the River Center.