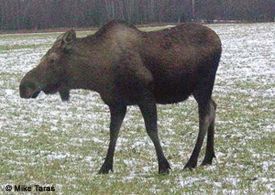 Hunting calf moose calves emulates natural mortality more closely than bull-only hunts. Because fewer calves survive through winter than any other age category, a higher percentage of calves that are harvested by hunters would die over the winter anyway.

“Most calves and fawns will soon die. Only the luckiest and fittest will survive. Therefore either hunters or Mother Nature can take them. The logical harvesting strategy is to take calves or fawns during the fall hunting seasons, before winter can waste them.”

-Valerius Geist, Professor Emeritus of Environmental Science at the University of Calgary, Alberta, and leading authority on wild ungulates.

Some people are genuinely taken aback to realize that game managers use calf hunts as part of their strategy to manage moose populations in some areas. I have even heard dyed-in-the-wool hunters claim that it is unethical to kill calves - and that it will destroy moose populations.

In truth, calf hunting is a widely used and effective management tool. A quick look at game management and the history of the “buck only” hunting ethic will clear up these misconceptions about harvesting antlerless animals.

The word ‘calf’ conjures the image of a helpless newborn lying wet in the grass, hiding still and silent from predators. It is important to note that calf hunts take place in the fall when calves are relatively large and capable of living on their own. By September moose calves can weigh 300-400 pounds, roughly the size of an adult bull caribou, and yield about 100 pounds of boned-out meat.

Cow and calf hunting was not a contentious issue until the turn of the 20th century. Widespread market hunting and unrestricted hunting for food culminated around the 1890s, and many game animals in the Lower 48 were virtually eliminated. In that era, all ages and sexes of animals were harvested - people hunted for meat and it made little difference if there were antlers on the animal’s head. People also did not understand the principle of sustainable yield and many held the attitude that it was only a matter of time before there would be no game left - so they had better get their share.

Fortunately, at the turn of the century game management agencies began to implement and enforce regulations to protect and increase the remaining game populations. To grow the populations agencies prohibited the harvest of antlerless animals - a good strategy for low or declining populations.

Pennsylvania was one state to spearhead this effort to rebuild their obliterated white-tailed deer population. Initially, resistance to the “buck only” policy was considerable, and enforcement was difficult. Over time, efforts to educate the public were successful, and attitudes began to change. Enforcement became more effective, and the deer population rebounded.

“All western states allow taking of calves and fawns,” said Fairbanks Area Biologist Don Young. Recently, Colorado hunters took more that 4,000 elk calves, and Pennsylvania hunters took more than 100,000 deer fawns. Many Canadian provinces and all Scandinavian countries allow taking of moose calves. “Forty percent of the moose harvest in Scandinavia is composed of calves,” Young said.
Alaska had no regulation prohibiting the harvest of moose calves from 1959 until 2002, and it has always been legal to take calf caribou and fawn deer in Alaska. A short-lived statewide prohibition on harvesting moose calves was rescinded at the 2004 Board of Game meeting because there was no biological need to protect calves statewide.

“The repeal of the calf harvest prohibition does not make it legal to harvest calves throughout the state,” said Young. “It only makes it legal in areas where there is an any-bull bag limit, an antlerless-moose bag limit, or a specified calf hunt is in place.” This same scenario has existed since statehood.

Alaska is a huge state with incredibly diverse ecosystems, habitat and animal populations. No two populations face the same conditions - habitat, weather, predator pressure and hunting pressure is different across the state - and different management strategies are used in different areas. 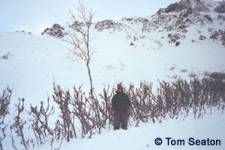 These “broomed” willows near Fairbanks show the impacts of overbrowsing by moose in the area.

Young manages the largest moose population in the state, on the Tanana Flats region outside of Fairbanks (Unit 20A and 20B). Although large and increasing, the population is nutritionally stressed and is managed for intensive harvest. Young is a major proponent of a selective harvest strategy which he describes as the movement from general harvest of bulls-only to more selective harvest across age and sex class (bulls, calves, and cows). Selective harvest ultimately increases yield and allows for micromanagement and stabilizing of populations.

“Calf hunts are not the appropriate management tool in all locations, but a combination of high moose density, poor habitat, and an intensive management mandate make Unit 20A an ideal location,” Young said.

Young said biologically, harvesting calves emulates natural mortality more closely than a bull-only hunt. Because fewer calves survive through winter than any other age category, a higher percentage of calves that are harvested by hunters would die over the winter anyway--either from starvation or predators. Biologists call this compensatory mortality. Harvest of adult animals, on the other hand, is called additive mortality because adults are far less likely to die over the winter.

Taking a low percentage of calves can increase hunting opportunity and yield, while having little effect on the population stability. This is an important concept when faced with intensive management. How else can you provide more hunting opportunity, put meat on more tables, yet apply minimal extra pressure on a population?

The use of radio collars, moose density surveys, twinning surveys, and vegetation studies now provide managers with a reliable way to determine when cow and calf hunts are appropriate. In addition, all antlerless hunts in Alaska must be approved annually by citizen advisory committees and the Board of Game to ensure that the harvest is having the desired effect.

Today, cow hunts are so common in certain areas that they hardly raise an eyebrow. In fact, many drawing permits for cow moose are coveted. Cow hunts are a critical tool for managers to maintain healthy moose herds and protect the public, especially near urban areas where there are lots of moose/auto collisions, or in high density moose populations. Bull-only hunts have their place, but so do cow and calf hunts. Managers need all the tools they can use to ensure sustainability of Alaska’s moose, one of our most important natural resources.

For a more information about Selective Harvest Strategy in Region III and/or a brochure about Moose Calf Hunts as a Management Tool, contact: