Skates - No Wheels, Blades or Stingers
on These Slow Growing, Long Lived Creatures 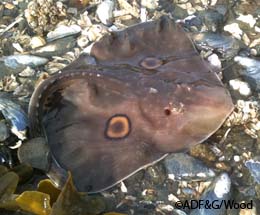 A small skate, possibly a California skate, on a beach in Juneau. Biologists are just now learning about these slow-growing, long lived creatures.

Lying among the mussels half immersed in a puddle left by the outgoing tide, its moist red gelatinous-like skin pulses softly. To a landlubber raised on Jacques Cousteau’s TV adventures, this creature from the Gastineau Channel deep—hardly bigger than my hand—can only be one thing. “Wow, a sting ray,” I think, “Here in Juneau!”

I rush inside for a camera and burst in on webmaster Karl Wood, who grew up fishing out of Petersburg. He gently explains that what I’ve found is most likely a skate. He has seen them brought up as bycatch while longlining for halibut. We document the creature with his iPhone, transport it carefully to the water and, with the tip of a wing and a whip of the tail, it’s gone.

Skates, rays, sharks, and sawfish all belong to a group called elasmobranchs: fish with cartilaginous skeletons and multiple gill slits on each side of the head. The largest skate, called the common skate, can reach more than eight feet long. Found in oceans throughout the world, skates (Rajidae) differ from rays (Mylobatidae) mainly because they lay eggs as opposed to being live bearing … and they don’t sting.

Skate used to be considered a ‘trash’ fish, but a raft of gourmet skate wing recipes is posted on the web. So is a warning from the Monterey Bay Aquarium, which lists it as seafood to avoid. Several North Atlantic species are in serious decline from overfishing. Skates are slow-growing, long lived and have one of the longest gestation periods of any vertebrate, incubating for years in their distinctive leathery egg cases. All of these factors contribute to potentially vulnerable populations. I can’t help but wonder about my skate.

Experts on skate species in Alaska are easy enough to track down, being few and not very far between. Many, like researcher Duane Stevenson, are NOAA scientists based in Seattle. Stevenson has compiled a poster on the skates of Alaska and, since none quite resemble the skate I found, I send him a photo. “That is an interesting looking specimen,” he replies promptly. It could be Raja inornata (California skate) but he would need to examine it more closely for a positive ID. Raja inornata hasn’t been documented north of southern British Columbia but “we have half been expecting it to show up eventually.”

Chance encounters with new and unexpected species, like tuna and giant squid, will touch off much talk of climate change but the appearance of a California skate may be more easily explained. In fact, it may not be very ‘new’ at all. Southeast Alaska is not a huge range extension for the fish, Stevenson says, and “we just don’t do a whole lot of sampling in Southeast.” 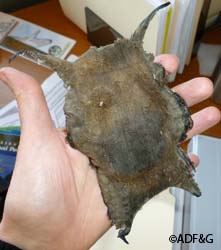 The egg case of a long nose skate. Beachcombers call these tough black fibrous pouches with curling tendrils at each end mermaids purses or devils purses

Information on skates may be slim but, in other parts of the state, it’s come a long way. Just a decade ago, they were still being lumped with sculpin, shark, squid, and octopus as “Other Species” in stock assessments. When Stevenson came on board with NOAA’s Alaska Fisheries Science Center in 2001, the state of skate taxonomy (the study of identifying, grouping and naming organisms) was becoming a problem. Bottom trawl surveys in the Bering Sea were pulling up skates by the tons and, to the average fisheries biologist, they all looked pretty much the same.
Over the next four years, NOAA researchers identified and documented the various species and published field guides for use on the fishing grounds. The distinctive markings on my skate are of little help to Stevenson because color patterns and markings in skates vary widely. Field ID methods are based instead on the pattern of denticles (modified scales) that cover the upper surface of the skate and the larger denticles or ‘thorns’ that run the length of the body.

Researchers have identified 14 species of skate, eight are common, in the Gulf of Alaska, Bering Sea, and Aleutian Islands; and the populations appear healthy. But their extraordinarily long gestation period—three to four years before they hatch—and another seven or eight years to sexual maturity are cause for concern, says Stevenson. “For those of us interested in maintaining sustainable populations of fishes, this really raises a red flag because if it takes that long to develop and hatch out of an egg case, we are talking about potentially fragile populations here.”

Commercial fishing crews have long been aware of areas of the ocean floor littered with skate egg cases, tough black fibrous pouches with curling tendrils at each end. Beachcombers call them mermaids’ purses or devils’ purses, but trawlers probably have their own names for the small parcels that clog their nets like thousands of foul-smelling bats. Fishing boats try to avoid these sites, but information was scant until scientists began studying them in conjunction with their work on taxonomy.

NOAA scientist Jerry Hoff, a specialist in skate reproductive ecology, says most skates congregate by the thousands to lay their eggs in these ocean bottom nurseries; the largest gatherings being in June and July. Some nurseries he has studied are located 500 feet to 1,200 feet deep and may contain tens of thousands to several million egg cases in various stages of development. The sites vary in size from less than a square mile to 27 square miles and are usually located at the heads of undersea canyons. Here the water temperatures are constant throughout the year. “Their strategy is to rely on a very stable environment: stable food source, stable water temperature,” Hoff says. “They have low reproduction but high survival; that’s just how they develop.”

A composite photo of a skate nursery, with egg cases litering the sea floor at the head of an underwater canyon off the coast of Alaska. Some nurseries are located 500 to 1,200 feet deep and may contain millions of egg cases.

Hoff says water temperatures, which average around 40 degrees F at these sites, are probably the biggest factor in the length of gestation. Deep water skates in colder temperatures may develop more slowly but scientists haven’t yet located their nurseries. Skates in temperate and tropical waters can take three months to a year to hatch.
Equipped with dual uteri and shell glands, a female can form two single embryo eggs at a time and produce an estimated 25 eggs a year. She lays her eggs one at a time then leaves them to develop on their own. Inside the case, the developing skate looks just like a chicken embryo until it grows a tail and the protective jelly surrounding it dissolves. Small slits open along the edges of the horns at each corner of the egg case allowing sea water in, and the skate begins to beat its tail creating a constant flow of oxygenated water over the gills. In time, the skate will emerge fully formed from the end of its capsule.

Hoff says two nursery sites, one for the Aleutian skate and one for the Alaska skate, are located at the head of Bering Canyon at Unimak Pass. A major fishing area for pollock and cod, fisheries observers have documented hundreds of incidental encounters with skates and their eggs over the years. Hoff is currently focused on locating such nurseries and devising an estimate of how many more exist. The North Pacific Fishery Management Council is considering special protections for six nursery sites in the eastern Bering Sea with designations of Habitat Area of Particular Concern (HAPC). Hoff says the fishing industry is concerned is that more will be grandfathered in, creating small ‘postage stamp size’ areas that will be difficult to navigate. “That’s what sparked the whole question of how many sites there are. If it’s a lot, they are really concerned.” However, he adds, any more than the proposed six must go through an entirely new process.

While scientists untangle the mysteries of Bering Sea skates, I’m still wondering what I found on our Southeast beach that day. Should I have kept it for science? “If you see another one like it, we’d love to have it,” says Stevenson. Should I have eaten it? I can almost hear Hoff shudder. “I wouldn’t have the stomach to ever eat them,” he says. “I work with them too much and they are stinky.”