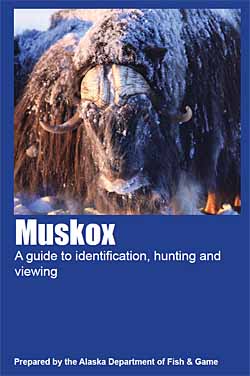 Muskox are arguably one of Alaska’s greatest wildlife success stories. Interest in these shaggy northern beasts is growing, as are their numbers in Alaska, and the Department of Fish and Game has produced a new publication – “Muskox: A guide to identification, hunting and viewing.”

The 30-page color guide, rich with photographs, offers natural history, identification tips addressing sex and age (complete with an ID quiz), information on hunting, meat care, and viewing; and for folks living in the north, pointers on sharing the country with muskox.

"People are curious about muskox, they are a strange looking animal that have been around since the last ice age,” said Meghan Nedwick of Kotzebue, an education specialist for the state who designed the publication and managed the project through production and printing. “As the population of muskox and people expand, education becomes increasingly important."

Tony Gorn is a state wildlife biologist in Nome who works with the Seward Peninsula muskox.

“From a population and regulatory perspective the overall history of this population is interesting, we started with 30 and here we are with more than 3,000,” he said. “Over the years, and specifically in the past several years, it’s amazed me how interested the public is in the Seward Peninsula muskox population. Additionally, researchers are more interested in studying Seward Peninsula muskoxen because of all the gaps in biology and science compared to other Alaskan mammals. There is growing attention to our muskox.”

The overall success of muskox comes from its recovery as a species in Alaska. Muskox were wiped out in Alaska (and in Asia) in the 19th century, leaving only remnant populations in Arctic Canada and Eastern Greenland. In 1930, a conservation effort led to the capture of 34 Greenland muskox, which were transported to Fairbanks. In 1935 and ‘36, 31 of the muskox were transported to Nunivak Island, west of Bethel in the Bering Sea. Those animals thrived and created a source population of animals that have been successfully transplanted around Alaska.

Today there are about 5,300 muskox in Alaska – about 3,400 on the Seward Peninsula and 400 in Northwest Alaska, and these are of particular interest to the biologists in Kotzebue and Nome. About 250 are scattered across Northcentral and Northeast Alaska, descendents of the 1969 transplant. About 560 muskox inhabit Nunivak Island, descendents from the original 1936 transplant, and there are 540 on Nelson Island. There are about 100 animals in captivity in places like the Large Animal Research Station in Fairbanks, the Alaska Zoo in Anchorage, and the Alaska Wildlife Conservation Center south of Girdwood. 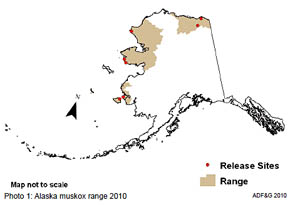 The range and initial release sites for muskox in Alaska. The lower two red dots at the center of the picture are Nunivak and Nelson Islands. The pair of dots above that are at the southwest tip of the Seward Peninsula. Cape Thompson to the north received transplants in 1970 and '77. The Eastern North Slope is at top right.

Gorn said muskox on the Seward Peninsula now share the landscape with the large mammals people were used to seeing in the past.

“This was moose and caribou country for decades, and it's really changed now,” he said. “People are really beginning to appreciate muskox, both viewing and subsistence resource. People want to learn more about what they’re looking at.”

In some areas, hunting is allowed only for bulls, in other, it is permissible to harvest cows. Gorn said hunters often prefer to take young bulls, two or three years old. The identification components of the new guide can help.

“People prefer a three or two year old bull, or a cow, and with a little experience looking at pictures, people can learn to do a composition survey of a herd and identify bulls, cows, and calves,” Gorn said. “That’s what’s cool about the Nome road system, people have the opportunity to go out and look at a bunch of muskox. With this book, people can go out and say, ‘that’s the three year old bull, in August, or in May,’ because there a big difference.”

About 1,500 copies of the guide were printed. Kotzebue wildlife biologist Charlotte Westing said the guides are free at the Kotzebue office and can be picked up in during work hours. Guides are also available in office in other areas where muskox are found: Nome, Bethel, Galena and Barrow. Folks outside these areas can view the booklet online as a pdf, and print personal copies – the URL is provided at the end of the article.

Due to funding limitations, a large number of guides were not printed for free, widespread distribution. “They’re supposed to help people who are in the vicinity of muskox,” Westing said. A hunter or wildlife watcher looking at a muskox in the field can most benefit from a guidebook in hand.

Westing said all the state biologists involved with muskox contributed to the guide. They contributed their knowledge, and tried to address the questions that had been raised about muskox over the years.

“It was a really great thing to have all of us working together on it, talking about things and weighing in,” she said. “I think it’s a really attractive product.”

Many of these same biologists have been working on another muskox document, a new muskox management plan to guide state management of these animals.

“We’re still working off a muskox management plan from mid 1990s, but since then so much has changed,” Gorn said. “We have a draft prepared, and we’ll go to federal cooperators, and then to the public.” 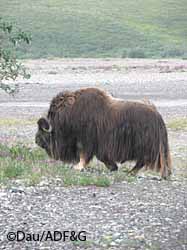 Gorn said the muskox population seems to be growing at about five or six percent a year. As the population has grown, muskox are moving into new areas. Different populations are growing at different rates, and biologists are eager to learn more about the animals. Northwest Alaska, the region of Cape Thompson between Kotzebue and Point Hope, is one area of interest.

“There were two reintroductions at Cape Thompson, and that population has not grown like the Seward Peninsula population has,” Westing said. “There was a core area surveyed regularly, mainly up the coast, and we have an incidental observation data base that goes back to the time of introduction. We’re seeing more and more muskox outside that core area, and seeing a slight decrease in population within the core. We need to try to understand if the decrease in the core can be attributed to emigration or if something bigger is going on. This study will help us understand how many muskoxen we have and what areas they’re using.”

In March of 2011 biologists plan a survey of that part of Northwest Alaska to assess the population.

Muskox surveys involve flying over vast areas of remote country. But new techniques are fine-tuning the effectiveness of the surveys, and biologists are looking at new areas as the animals expand their range. Muskox have moved into Bering Land Bridge National Park, and last year state and federal biologists worked together to conduct surveys. "They also applied a new survey method that provides more information for biologists."

“It was a really positive exercise,” Gorn said.

While viewing and hunting opportunities have fostered a growing appreciation for muskox, they are also valued for another unique trait – their unusual wooly undercoat, a special wool known as qiviut.

“A lot of people here and in the Nome area like to collect the qiviut,” Nedwick said. “It’s a wonderfully soft yarn, and you can stuff it in the toes of boots or finger of mittens when it’s super cold and it acts as an extra insulation layer. It’s incredibly warm underwool.”

The PDF of “Muskox: A guide to identification, hunting and viewing.” can be viewed at: http://www.adfg.alaska.gov/static/species/speciesinfo/muskox/pdfs/muskoxguide.pdf

For even more on Muskox see: http://www.adfg.alaska.gov/index.cfm?adfg=muskox.main