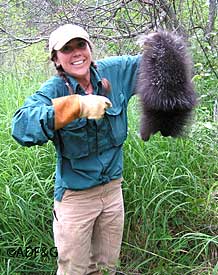 Wildlife biologist Jessy Coltrane with one of her subjects. Coltrane is demonstrating the “tail grasp” method for picking up a porcupine.

Exactly how do porcupines survive winters in our northern climate? That was the question that prompted acting Anchorage area biologist Jessy Coltrane to study both captive and wild porcupines for her doctoral work at the University of Alaska Fairbanks.

Coltrane spends a great deal of time in Far North Bicentennial Park, a vast tract of wild land in Anchorage surrounded by Hillside neighborhoods and Chugach State Park. One winter, along a trail by an open bog, she frequently spied the same porcupine perched high in a birch tree, completely exposed to wind and subzero temperatures.

She wondered to herself, “How is that porcupine able to do that?”

“Here is this porcupine basically eating food that has the nutritional value just slightly better than cardboard and yet it is able to deal with the extreme cold,” Coltrane said. “I wanted to know how they are able to survive on such a poor quality diet.”

Coltrane found that not many studies had been done on porcupines. No one, for example, had ever investigated the winter diets of porcupines in Alaska.

Coltrane’s research on the winter nutritional physiology of porcupines spanned from 2005-2008 and included two parallel studies. For part of her work, she captured 28 porcupines from parks and greenbelts in Anchorage and fitted them with radio collars so she could follow their movements and study their diet in relation to available habitat.

In addition, during the winter of 2006-2007, Coltrane worked with 10 captive porcupines at a Fairbanks research facility to learn how the quilled rodents process food and how they eke out a living on such a poor winter diet.

Part of the challenge – and the fun – was discovering the best methods to capture and handle porcupines.

Finding animals to capture took many hours or often days of walking through forests searching trees. Capturing the porcupines, by comparison, proved easier. Coltrane and Rick Sinnott, the now retired Anchorage area biologist, would usually capture them by setting traps at the base of trees that contained porcupines.

At first, the biologists baited the traps with apples or beets. But then, after forgetting the bait, they realized they didn’t need any food. When the porcupines eventually descended the tree and tried to leave, they would follow the fence and walk straight into the trap.

They weren’t hard to capture repeatedly, either. Coltrane captured each porcupine in her study four times a year during each season to check how body mass and composition had changed seasonally – and to determine how much energy the porcupines were expending to survive winters.

Depending on the situation, however, the biologists sometimes had to climb trees and capture the porcupines in a dip net. This method at times proved precarious.

Once Sinnott climbed a spruce tree after a porcupine and it scampered into an adjacent birch tree and kept climbing. When the animal climbed too high to reach, Sinnott decided to stop pursuing it and climb down. The porcupine then fell from the birch tree and began bouncing off the spruce branches, headed straight for Sinnott. He clung to the tree and ducked. Fortunately, the spiny porcupine narrowly missed him by just a few feet.

Once it was on the ground, Coltrane scooped the porcupine into a net. “It worked out fine,” she said, laughing. “It was unhurt and we caught it.” 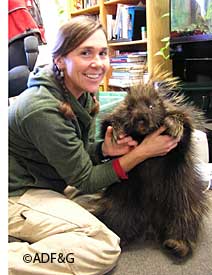 Jessy Coltrane with one of the captive subjects.

Handling the animals proved trickier. Coltrane said she read in scientific papers about the “tail grasp” method for picking up a porcupine. Porcupines slap their tail as a warning when they feel threatened. When a porcupine lifts its tail to slap it, the biologist grabs the underside of the animal’s muscular tail which has bristly hairs but no quills. One has to be careful, though, to touch only the bottom of the tail.

It worked well, but “you have to be quick,” Coltrane noted. You also have to be strong to lift a large porcupine, which weigh as much as 30 pounds, by its tail. With the smaller animals, you also have to be careful they don’t curl up and bite you while you hold them. “They do bite,” Coltrane said she soon learned.

Porcupines do not, however, shoot quills like many people commonly believe. Coltrane said she found that even some biologists believed the common myth.

Sinnott seemed to suffer the worst of the abuse inflicted by the porcupines. He once had to have part of a quill removed from his eye, and another time had a quill stuck through one of his fingers. Coltrane pulled it out while Sinnott screamed. Another time, after pursuing a porcupine that hid in a hollow log, Sinnott found his frozen fingers stuck full of quills through his leather gloves. Coltrane said she once had a captive porcupine land on her leg when she dropped it during handling. She had to remove more than 20 quills from her shin.

The project entailed some danger and countless weekends of work over three years checking traps and pursuing porcupines. But what Coltrane has learned turned out to be very interesting.

Coltrane found that porcupines were surviving on a winter diet high in toxins and low in nitrogen, an essential element required by all plants and animals for the production of proteins and amino acids. Worse yet, eating plants laden with toxins, such as terpenes, the porcupines suffered additional energetic costs related to processing the toxins.

In the wild, Coltrane was able to document that the Anchorage area porcupines were eating the cambium, or inner bark, of white spruce and paper birch trees during winter. They also spent a lot of time eating white spruce needles, which are high in chemical compounds known as “plant secondary metabolites.” The compounds are essentially toxins used by plants to keep from being eaten.

It’s not exactly a quality diet – think of a couch potato consuming only junk food laced with terpentine.

In her work with the captive porcupines, Coltrane found that the porcupines did lose a fair amount of the energy they gained through the process of consuming the food and excreting the toxins. “It was a relatively high cost,” she said.

So how do porcupines manage?

For one, porcupines begin winter with a relatively high percentage of body fat. Coltrane said her study animals averaged slightly less than 60 percent body fat in the fall. Packing on weight during the summer and heading into winter with a lot of body fat is a common winter survival strategy among northern herbivores – think mountain goats and moose for example. However, it is not a common strategy for non-hibernating rodents because of their usual small size, Coltrane said.

Rodents are typically smaller and conserve body heat and reduce overall energy loss in winter by hibernating, eating constantly on cached food, burrowing under the ground or snow, or through a combination of strategies. Porcupines don’t employ any of those common winter survival strategies, Coltrane said. 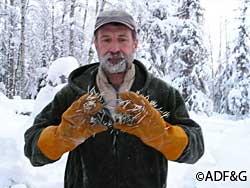 In the wild, the porcupines in Coltrane’s study lost an average of about 35 percent of their body fat during winter. Significantly, however, they did not lose any lean body mass – something most animals would lose under similar situations. That meant that even in the wild, the porcupines did fairly well on a seemingly poor diet. Coltrane also learned that porcupines do not lower their core body temperatures to conserve energy – another common winter survival strategy of smaller northern mammals.

Unlike their wild counterparts, the captive animals did not lose any body mass or fat through winter. Coltrane fed some porcupines a pelletized food low in nitrogen and high in fiber designed to mimic a natural diet, minus the plant secondary metabolite. She fed the remaining porcupines just white spruce needles. Those porcupines that ate only spruce needles did lose weight. But as soon as they had access again to the pelletized food, they put the lost weight right back on.

“That would not be the case for many northern herbivores,” Coltrane said. Many northern mammal species would continue to lose weight throughout winter even if better quality food suddenly became available. Those animals, including moose, cannot quickly change how they are regulating their bodies and processing food to take advantage of sudden food availability.

Coltrane said that research finding helps explain why porcupines are such an extremely adaptable species. And that adaptability is probably why porcupines have to the ability to occupy niches in a wide range of habitats.

Porcupines are found throughout much of North America, from the deserts of the Southwest to the Arctic. And wherever they are found, they typically eat foods that they don’t have to compete for, such as spruce needles and tree bark.

“You would never see a caribou in a Sonoran desert,” Coltrane noted.

Coltrane also found that her study porcupines moved around very little during winter. Coltrane found an average home range of 1.2 square kilometers (about 320 acres) for the wild porcupines she studied.

While some porcupines succumb to the cold and lack of food each winter, they typically don’t die off in large numbers like shrews and voles, for example. During three years of tracking porcupines in Anchorage, only one porcupine appeared to have died from winter nutritional stress, she noted.

Coltrane’s work was published this year in the Journal of Comparative Physiology B in an article titled, “Winter as a nutritional bottleneck for North American porcupines (Erethizon dorsatum.” Another article, “Seasonal regulation of body composition, water turnover, and field metabolic rates in 12 captive and free-ranging North American porcupines (Erethizon dorsatum) in Alaska,” is due out in the Journal of Mammalogy in June, 2011.

Now that her dissertation work is nearly complete, Coltrane has even more respect for this tough northern species. Her work has helped answer a few mysteries and increased public awareness.

“It has generated a lot of local interest in porcupines,” Coltrane said. “People see them a lot but don’t know that much about them, or what they think they know may not be right.”