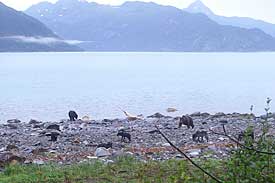 Two brown bears and seven wolves - parents with pups of the year - cooperatively feed on a dead humpback whale in Glacier Bay. The whale is at the tideline in this photo. Both time-lapse and motion-triggered cameras were used to capture images.

It’s not often that bears and wolves eat together at the same table, but it does happen. And new research shows that sometimes they even bring the kids.

The “table” in this case was a dead humpback whale, enough food that none of the guests needed to feel possessive.

Researcher Diana Raper is studying scavengers, collaborating with the Alaska Department of Fish and Game and the National Park Service. A PhD student at Oregon State University, she spent time this year in Southeast Alaska on the Gustavus Forelands and in Glacier Bay. Cameras equipped with motion sensors are her primary tool, and these cameras have captured some remarkable images, including “tolerance feeding” between wolves and bears.

“One of the most exciting was seeing wolves with their pups and bears, all in a short time frame,” she said. “It doesn’t seem like either the wolves or the bears were being defensive of that large resource that was there.”

The whale was found dead on the beach at Scidmore Cut in the West Arm of Glacier Bay in late May. Raper set up a motion-triggered camera and Tania Lewis, terrestrial biologist for the park, put a time-lapse camera on the whale. They photographed thousands of images before the carcass washed away Sept. 3, including the tolerance feeding and numerous images of four wolf pups.

Lewis noted some interesting details regarding the scavenging bears. The section of beach in Scidmore Cut was surveyed in 2001 for signs of bear activity, and there were no rub trees, no bear beds, and only one section of “mark trail” (not the pipe-smoking naturalist of comic-strip fame, but a repeatedly used trail where bears create distinct individual footprints). On Oct. 7, 2010, a bear activity survey was conducted and revealed 21 rub trees, 67 bear beds, and 48 sections of mark trail.

“Shows what a little muktuk on the beach can do,” she wrote.

The whale cam was an unexpected opportunity. Raper initially contacted Fish and Game last winter exploring research opportunities, and state biologists Kevin White and Rod Flynn recognized the potential to collaborate on a study of carnivore ecology on the Gustavus Forelands. White and his colleagues at Fish and Game have been studying moose in that area, and biologists are interested in the larger picture of moose, bears, wolves and their interactions. 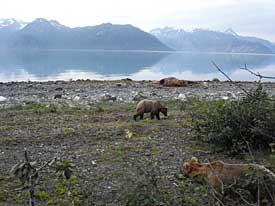 Two brown bears in the vicintity of the whale carcass, now fully exposed (just right of center) at low tide.

“We put some cameras out last spring on a trial basis, and it’s been really fun to see what shows up,” White said. That included the whale, a moose, and a sea lion carcass that washed up on the Beardslee Islands in lower Glacier Bay.

Two cameras were deployed in the spring on a collared moose that was likely killed by wolves. The collar send signals that notify biologists that the animal has died (is completely inactive) and also guides biologists to the animal. “This was a great opportunity to put out a few cameras and see what would come to feast on the buffet,” Raper said.

“We were pretty successful, we had wolves come in, and one image showed three wolves in one frame,” White said. “We had a brown bear come in, that was a surprise at first, but it turns out there are more brown bears around than we thought. It seems like this summer and through the fall that there were a few brown bears around the outskirts of the Gustavus Forelands.”

This fall, Raper and her collaborators at Fish and Game deployed about 10 cameras, most on gut piles and carcass remnants left by moose hunters.

“I could not have done it without the hunter’s cooperation, the whole community has been really welcoming and helpful,” Raper said. “They called me with the location, so I could find the carcass, and some hunters called while they were field dressing so I could put the camera on immediately.”

At this point, Raper and her colleagues have gathered about 6,000 images in the forelands. “They are pretty good,” she said. “The cameras are set at 5.1 megapixels, and have an enormous memory. Some (images) are better than others, depending on the light, some are really clear and most are really good.”

Raper is also analyzing scat to learn more about the scavenger/predator diet. In some cases, she can easily identify components, like fur, hair, vegetation, and porcupine quills. She may also use isotope analysis to determine the origins of the food sources. These can reveal if the animal was consuming meat from a terrestrial or a marine source, and determine the what proportion of the diet is meat versus vegetation. 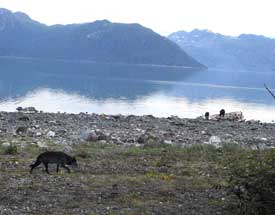 A wolf approaches the whale carcass, at the tide line. Two brown bears are already at work, joined by ravens.

Raper has found porcupine in a few samples of wolf scat, and salmon as well. She found that black bear scat had few meat components and is dominated by vegetation.

White commented on a couple of elements that surprised him.

“She had over 6,000 pictures and documented nine species, and didn’t have one picture of a coyote,” he said. State researcher Jeff Jemison found a coyote den on the Gustavus Forelands this summer, White said, and people see them occasionally around Gustavus. So why no pictures of coyotes?

The nine species photographed are black bear, brown bear, wolf, marten, moose, red squirrel, ravens, bald eagles, and magpie. White said the moose aren’t scavenging, they are just in the area and happen across the site.

“Another interesting thing is how long the animals are coming back to the carcass, even though there’s not that much remaining,” White said. “One of our collared animals that died, it was killed by wolves, all the meat was gone and there were just bones left. Jeff set up a camera just to see what would happen, and six weeks later we get the camera, and there had been animals coming up for over a month, going back to the spot, maybe to chew on the bones, or maybe it’s a good memory for them. I would have never thought they would be coming back.”

The main focus of her work begins next spring, when moose calving season starts.

“I am really interested in predators, and black bear and wolf habitat use, particularly during the calving season,” Raper said. “How bears and wolves are selecting habitat seasonally, and how important moose are as a resource for them.”

The focus of that work will be in the spring, when moose give birth – virtually all at the same time. Raper said calving occurs between May 18 and June 4. “It’s exciting. It’s a pulsed prey event, they drop all those calves at once.”

That’s a survival strategy used by other species as well, particularly caribou. Calves gain strength and mobility quickly, and are far less vulnerable at two or three weeks than they are at one week of age. Predators may target calves, but they have a narrow time frame to act, and they can only eat so many calves. That’s known as “predator swamping.”

Next calving season, the predators, scavengers, and cameras will be ready.