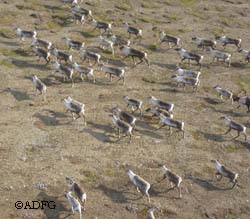 Reindeer are domestic cousins to caribou. There are about 18,000 reindeer in Alaska, and about 12,000 of those are on the Seward Peninsula.

Most know Donald Olson as a medical doctor and the Alaska State Senator for district T. But he is also the great-grandson of a Saami reindeer herder who came to Alaska to teach the locals the art of reindeer husbandry, and on this rainy summer day he is living his heritage. His mission is to complete the round-up of Teller’s Kakaruk/Lee reindeer herd and to drive them into the corral with the aid of three “walkers,” or herders on foot. At the corral, 50 volunteers work on the reindeer, in exchange for meat.

Reindeer herding in this way is possible because the animals stick together when danger looms, unlike their wild cousins, the caribou, which scatter when seeing a predator come near. At the corral, the herd is counted, fawns are tagged, bulls not meant to procreate are castrated so they can fatten up and not expend energy on sparring during the rut. Also, the antlers are cut. But during this summer’s round-up, only a fraction of the animals were processed in that way.

The roundup offers insight into Alaska’s reindeer industry. Reindeer are domestic cousins to caribou. There are about 18,000 reindeer in Alaska, and about 12,000 of those are on the Seward Peninsula. Reindeer are also found on Nunivak Island, St. Lawrence Island, the Pribilof Islands and some of the Aleutian Islands. There is a tremendous demand for reindeer meat and great potential for the industry, but processing issues, wild caribou, and logistics create challenges.

The inclement weather didn’t play in favor of the July roundup. It started with difficulty finding the herd and to keeping it together.

“Due to the low visibility, our biggest fear was that they run off into the hills and into clouds, where we would have lost them,” Olson said.

Driving the herd from the air is a dangerous task as the helicopter hovers about eight feet above the ground. “Things can happen pretty fast when you’re that low to the ground,” Olson said. To make his point, he gestures to the hills and said that the pioneer of helicopter herding, Jim Isabell was killed in a helicopter crash there in the early 1980s.

The summer reindeer roundup is a big community event and despite the incessant rain, wind and cool temperatures, nearly 50 people from Teller climbed into their motor skiffs and took the uncomfortable boat ride upriver to the reindeer corral, where Canyon Creek meets the Kuzitrin and Imruk Basin. In exchange for reindeer meat and the excitement of the roundup, the community helps with the counting, castrating and cutting. For the herder, it means writing up a huge shopping list, getting groceries from Nome and hauling all that up to the corral to feed the helpers.

But just as Olson rounded up the reindeer and pushed about 1,700 head into the corral, wind picked up and blew over the fence. Half of the rounded up animals escaped. Olson said the previous year, things went smoother and he managed to round up 2,800 reindeer.

Beyond mastering the flying, Olson said helicopter herding requires a sense for the herd and the animals. “To drive them you need a cowboy sense and you need to know how to direct the animals, so that you don’t drive them to exhaustion,” he said. He added that it is easier to train a knowledgeable herder to fly a helicopter than to train a pilot to get a feel for the reindeer.

While the helicopter flies back to the road to gas up, the walkers keep the herd safe and together. They are armed with guns to fend off bears or wolves. Olson said as the deer get a break from being driven, they eat and drink, have some time to rest up before the final push into the corral. 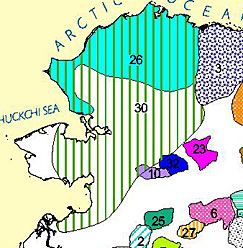 Northwest Alaska with the Seward Peninsula on the left. The range of the Western Arctic Caribou herd is indicated with green lines. The herd has occasionally ranged west far enough to contact domestic reindeer, and thousands have run off with their wild cousins.

At the corral, Leslie Davis, a graduate student with the University of Alaska Fairbanks (UAF) Reindeer Research Program had 20 GPS collars and 10 satellite collars to put on reindeer. She studies the animal’s breeding behavior and habitat selection. Before the males go into rut, she flies out into the field, tracks “her” animals and counts the amount of females in one harem before and after the rut. In addition, she hopes to find if size matters even in the reindeer world as she researches the relationship between antler-size and the size of a bull’s harem. Davis also tries to shed light on the mystery of the reindeer’s habitat selection during the fall. “During spring and early summer we know that they eat willows, later, in late July to August, they eat a mix of lichens and sedges, but we don’t have a good understanding of their fall habitat selection and breeding,” she said.

Greg Finstad is the program manager for UAF’s Reindeer Research Program. Finstad said while the range land on the Seward Peninsula is in excellent condition, the culprit for the decline in reindeer roaming the range is the Western Arctic Caribou Herd. The wild cousins simply steal the reindeer away from their herders. “We lost three-quarters of the Seward Peninsula reindeer herds to the caribou,” Finstad said.

Herders like Merlin Henry in Koyuk had fought hard to keep their herd, only to see it taken away by caribou. Finstad said that Henry came up with a method to keep his reindeer from wandering off. He would get his animals used to being in an enclosure and fed rations provided by humans. When the caribou show up, he’d bring his reindeer into the enclosure and once the caribou herd is gone again, he turns his reindeer out on the range again. Finstad said this works well. While the Teller herd has not been affected too much by caribou, predation by bears and wolves is the biggest problem for the Kakaruk herd. However, he also said that the herder is taking good care of the herd and thus manages to keep the numbers of animals lost to predation down.

Teller’s Kakaruk/Lee reindeer herd is the largest herd on the Seward Peninsula, with about 2,800 animals. The herd is managed by herd manager Julia Lee. Lee was not available for an interview for this story.

Finstad said that other Seward Peninsula herds include the Davis herd around Nome consisting of a widely ranging number of 500 to 2,000 animals, Tom Gray’s herd in White Mountain with approximately 50 animals. There is also a large herd of 2,000 to 3,000 reindeer on St. Lawrence Island, owned by the Savoonga IRA, and the small herd owned by Merlin Henry in Koyuk. Rose Fosdick, executive director of the Reindeer Herders Association said there are approximately 10,000 reindeer on the Seward Peninsula.

Besides fighting off caribou and large predators, a challenge for herders is also the logistical task to slaughter, process the meat properly and to get it USDA inspected and brought to market.

“There is a huge market out there for Alaskan reindeer meat,” said Finstad.

The program he oversees is geared to develop and promote the Alaskan reindeer industry. Their research spans topics from herd management and animal health to nutrition and meat quality to benefit the reindeer herders. Finstad said that they closely work together with Kawerak’s Reindeer Herders Association.

He said that almost every major meat distributor in Alaska is looking to buy reindeer meat and that meat processors are literally waiting in line to get their hands on good quality reindeer meat. Reindeer meat is valued because it is tender and tasty while rich in protein, high in minerals and low in fat and cholesterol. 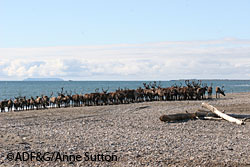 Reindeer on the beach near Nome. Anne Sutton/ADF&G

“They even buy up caribou meat from Canada and reindeer from Scandinavia to put in their sausages,” said Finstad. “If there was a way to slaughter the reindeer in Teller, that herd would generate millions of dollars.” The hold-up is not having a method to get the reindeer meat USDA inspected for sale. This, Finstad hopes, could be alleviated as the research program bought a mobile slaughter unit that would also allow an USDA inspection.

Finstad said as the college works the kinks out of the unit, he plans to teach workshops and to train people to knowledgeably process reindeer meat to have it USDA inspected on the spot and shipped to Alaska meat processors. The mobile unit is currently stored at Northwest Campus in Nome, and he hopes to take it to the villages in years to come for training and workshop sessions.

Part of his intention is to get young people excited about the prospect that reindeer could bring economic growth to the region. Bringing up a new crop of herders seems equally challenging as the predation problems. “Right now, all the younger folks see that it’s a lot o hard work to keep reindeer, but we want to show them that it could be a way to make a very good living on the Seward Peninsula,” he said.

Under a special waiver, Seward Peninsula herders can slaughter reindeer when there is snow on the ground and temperatures are below freezing. But this only supplies food for subsistence use and once in a while reindeer meat from a local herd can be found in freezers in Nome’s grocery stores. Finstad said that Alaska offers a range of 15 million acres that would be suitable for reindeer production. “We should be able to sustainably produce 50,000 to 100,000 animals,” said Finstad. He added that the research program has done extensive research on keeping reindeer in fenced enclosures with good results. But he said the Chukotkan reindeer that were introduced to Alaska in the 1890s by Sheldon Jackson are a breed that likes to stay on the range and unlike caribou doesn’t like to wander around too much.

Finstad said the reindeer present at the Seward Peninsula are the result of artificial selection by humans and although they run free, they easily socialize with humans – as evidenced by Velvet Eyes, the domesticated reindeer often seen riding around Nome in the back of her owner, Carl Emmons’ truck. But in terms of meat production, Finstad said that he believes in the reindeer industry and that the Seward Peninsula could sustain 50,000 to 75,000 reindeer. “It would be good for the villages, the people and we could produce a fabulous product,” says Finstad.

While reindeer have contributed their meat to feed humans for more than 5,000 years, Donny Olson said his connection to the animals runs deeper than meat production considerations. Olson said his ancestors on both sides of the family had reindeer herding in their blood and he feels an affinity to the animal and the reindeer culture. “They are majestic and magical animals,” he said. “They are remarkable in the sense that they sometimes give birth in blizzards and the fawn has to get up and run within minutes after birth. It’s an interesting animal not just to herd but I really enjoy being around them.”

This article ran in the Nome Nugget on Aug. 12, 2010. It has been reprinted with permission from editor Nancy McGuire.