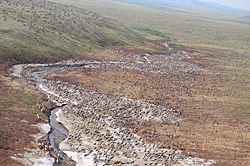 Alaska’s largest caribou herd, the Western Arctic Herd, numbered about 401,000 animals as of July 2009 according to a census recently completed by the Alaska Department of Fish and Game. Although this is a slight increase from 2007 when the herd was estimated to number 377,000 caribou, department biologists interpret the 2009 estimate as evidence that the herd has been stable during this time. The difference of 24,000 caribou between these censuses is probably within the department’s ability to accurately count a caribou herd of this size in such a remote portion of the state.

The Western Arctic Herd last peaked around 2003 when it numbered 490,000 caribou.

The 2009 census, combined with annual estimates of adult mortality and calf survival, suggest that the 2007 population estimate may have been conservative. In 2007 department biologists found 99 percent of the collared caribou in the aggregations that were photographed so were confident that no large segment of the herd went undetected. However, some photos had long shadows in them that could have hidden caribou on the prints. Also, some small groups of caribou that lacked radio collared individuals near the main aggregations may have been missed. 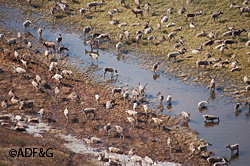 Caribou are counted in summer when they form large aggregations. Photo by Geoff Carroll.

In 2009 the caribou were aggregated to a far greater degree than usual, and no living, collared caribou were found during months of radio tracking after the photography was completed. Additionally, the prints were very clear. All of these factors contribute to the accuracy of the count.

Although the Western Arctic Herd has numbered over or around 400,000 caribou since 1990, the body condition of caribou from this herd has generally been good throughout this time. Additionally, the department has found no evidence that disease has become a problem for this herd. So far, it appears that the WAH is not being limited by density dependent factors. Instead, the decline of this herd from 2003 to 2007 may have been largely attributable to severe icing during one or two winters during that time.

At this point, population stability or even a slow decline is probably preferable to continued growth. In 1970, the Western Arctic Herd numbered 242,000 caribou but then declined to roughly 75,000 individuals by 1976 – an 18% annual rate of decline (many residents of northwest Alaska still question the 1976 estimate). The department recently intensified its monitoring program so that when this herd next declines it won’t catch anyone by surprise.

The next census is scheduled for 2011.

Jim Dau is a state wildlife biologist based in Kotzebue.