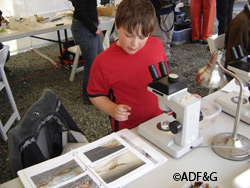 Cedar Miles peered through a binocular microscope at a dish of writhing aquatic invertebrates.

“Yow, I think he just ate him,” he muttered, captivated by the pondwater drama playing out under the microscope. He looked over at a guidebook and naturalist Bob Armstrong helped him identify a mayfly larvae. A participant in BioBlitz, 9-year-old Miles was surrounded by scientists, all working together to catalogue hundreds of plants, animals, mushrooms, insects and other life.

The 24-hour BioBlitz event began noon Saturday, June 26. About 400 people joined scientists to examine all life in the Fish Creek Valley on Douglas Island near Juneau. Eaglecrest Lodge served as BioBlitz headquarters. Dozens of stations were set up under canopies outside the lodge, shading biologists and participants like Miles with their microscopes, bird guides, plant keys and lichen samples.

“He’s definitely a budding naturalist,” said Lisa Miles, Cedar’s mom. “He’s homeschooled so this is a science opportunity for us.” The budding naturalist’s favorite aspect of BioBlitz was finding a bear track underneath the chairlift and casting it in plaster, with the help of a Forest Service biologist.

Teams fanned out through the Fish Creek area, surveying muskeg meadows, the intertidal zone, beaches and forest. Others set minnow traps and pulled seines through Fish Creek. Stream survey participants identified six fish species in Fish Creek - king and coho salmon fry, cutthroat trout and Dolly Varden char, and slimy sculpin and coastrange sculpin - with the help of Fish and Wildlife Service biologist Neil Stichert, Forest Service biologist Dave Barto and Megan McPhee of the University of Alaska. Cropley Lake, at the headwaters of the creek, yielded more Dollies. Additional fish species were located in the intertidal and subtidal, for a total of 24 fish species. 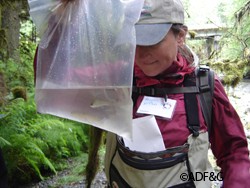 Fifteen mammals were identified by sight or sign.
The night crew met at 9:30 and worked until after 1 a.m. searching for owls and bats. Anabat detectors brought bats’ high-frequency echolocation calls down to the range of human hearing, and the buzzing clicks alerted batters to the presence of at least one species of bat. About a dozen people participated, and caught glimpses of the nightfliers flitting among the spruce. 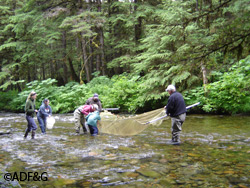 Robert Vieth with the Juneau Economic Development Council recently moved to Juneau and has attended several BioBlitz events in recent years on the East coast. In the weeks following the Juneau event, he reviewed the data sheets and recorded the tallies. The total hit 797 species.

BioBlitz was a collaboration between the Alaska Department of Fish and Game, the U.S. Forest Service, the U.S. Fish and Wildlife Service, the National Oceanic and Atmospheric Administration, the Juneau Economic Development Council, the City and Borough of Juneau, and a variety of non-governmental organizations such as the Alaska Coastal Rainforest Center, Gastineau Guiding, Juneau Audubon, Discovery Southeast, and Trail Mix. DIPAC (Douglas Island Pink and Chum), Sealaska Heritage Institute, the University of Alaska Southeast, the Juneau Urban Forestry Partnership, the Nature Conservancy, Alaska Nature Connection, and Cooperative Extension 4-H also participated and supported the event.

Organizers hope to see this become an annual event in Southeast, focusing on different areas each year, and plans are currently underway for the 2011 BioBlitz, tentatively scheduled for June 18 and 19 in the Auke Lake area near the University of Alaska Southeast.