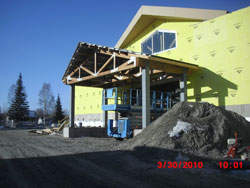 The Ruth Burnett Sport Fish Hatchery (RBSFH) located near the Carlson Center in Fairbanks will begin operation with the arrival of rainbow trout from the Fort Richardson Hatchery. Chinook, coho and char eggs will follow throughout the summer and fall with fingerling sized rainbow trout being stocking in August of this year and the first catchable sized (8-10 inch) fish being stocked in late May and early June of 2012. King and coho salmon along with grayling and lake trout eggs will come from wild fish collected at local waters such as the Chena and Salcha rivers. Initial production levels are aimed at re-establishing previous stocking numbers prior to the loss of heat at the Fort Richardson and Elmendorf hatcheries. Eventually production will be doubled allowing for a significant increase in stocking levels.

Recognizing concerns over high iron levels in the local groundwater ADF&G staff constructed and operated an experimental hatchery to investigate methods for improving water quality and operated intense reuse systems utilizing this water. Results from these studies were directly applied to the final facility design and some of the water filtration equipment utilized in the experimental hatchery has been transferred and installed at the new hatchery. The remainder of the experimental hatchery equipment (rearing tanks, gas balancing systems and filtration equipment) has been sold and is being installed at Chena Hot Springs as part of a joint venture research project between the owner and the University of Alaska Fairbanks.

A look inside the new hatchery.

The RBSFH will utilize intense water reuse systems capable of recycling up to 99% of the water flowing through the rearing tanks. While recycle technology is not a new concept it is a relatively recent addition to cold water fish production. During the past 6 years all of our hatchery staff members have attended the Recirculating Aquaculture Short Course, sponsored by Cornell University and the Conservation Fund’s Freshwater Institute. In addition to attending training courses staff members have been gaining firsthand experience in the operation of a recirculation system at the Fort Richardson and Fairbanks Experimental hatcheries.

In addition to the office and production areas of the hatchery there is a 2,000 sq/ft. visitor center incorporated into the building. This center is intended to provide the public visual access into the fish rearing area as well as an opportunity to learn more about the Division of Sport Fish.

It has been a long a bumpy road to get this far, without a doubt there will be more challenges encountered as we bring this new facility on line. No group of people will be happier to see the first load of catchable rainbow trout roll out the door than the fish culturists and biologists who have been working so hard to make this a reality. A grand opening ceremony is tentatively scheduled for late August.

Jeff Milton is the Sport Fish Hatchery Program Supervisor, stationed in Anchorage. He has been a fish culturist for over 20 years and worked with the department for 10 years.