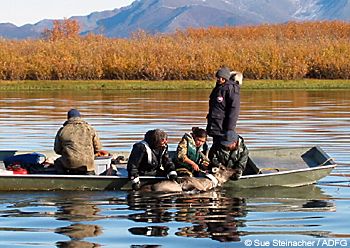 Students and biologists work as a caribou collaring team.

Teenagers can be a tough audience to impress. The students from northwestern Alaska let it be known they'd seen plenty of caribou, and had been riding in boats and camping all their lives. So coming to a place called Onion Portage, downriver from Ambler on the Kobuk River, didn't seem like such a big deal - even to help with an Alaska Department of Fish and Game caribou-collaring project.

But that all changed once they got their hands on a live caribou.

For over 20 years, ADF&G wildlife biologists have used small boats to grab caribou from the Western Arctic Caribou Herd as they cross the Kobuk River en route to their wintering grounds farther south. Individual cows and bulls are held by teams of people while a syringe of blood is drawn and a collar with a VHF radio transmitter, and sometimes a satellite transmitter, is placed around the animal's neck.

The entire process takes only a few minutes. The animal quickly resumes its swim across the river, having given the biologists a way to test for disease, and a valuable means of tracking the herd's movements throughout the year.

Twelve years ago, Jim Dau, Kotzebue area biologist for ADF&G, decided he wanted local people to witness this low impact approach to caribou capture that didn't involve helicopters, dart guns and drugs. Dau said, "I hoped that people who hunted caribou year round would appreciate this method of capture that was safe for both caribou and people, and that we were responding to their concerns about technical aspects of our work."

But he couldn't find adults who could come to his field camp. "The problem was that fall is a busy time of year. Everybody is out berry picking or getting caribou," he explained. "Then I hit on the idea of involving kids - they're enthusiastic and inquisitive, and it just seemed like a natural fit."

It was also a natural fit for Heather Cox, a University of Alaska Fairbanks genetics researcher and educator partnering with the Noatak high school on a caribou genetics project, and White Mountain teacher, Chris Brown, whose junior high curriculum revolves around caribou.

And that's how for the first half of the week-long project the Noatak high school students ended up elbow deep in icy cold water hanging onto caribou antlers and tails. The second half of the week was the White Mountain students' turn to get wet while gaining some 'hands-on' wildlife biology experience.

The students were trained to be full working members of the capture team - not just observers. They learned how to hold a sometimes nervous animal close to the side of the boat while a blood sample was taken. They took turns fitting a collar around the caribou's neck, tightening the nuts in place, and releasing the animal.

Students in another boat learned how to grab and hold a calf safely nearby while its mother was being handled so that the two would not be separated once released. A third boat made sure that none of the caribou turned around and headed for the wrong side of the river. 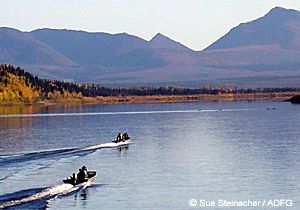 Heading out to collar caribou on the Kobuk.

When not in the boats students were on the river bank with binoculars scoping for the next group of caribou to enter the water. Some joined the biologists during the chilly morning hours to learn how to process the blood samples collected the day before. And in the evenings the students cooked their favorite caribou meals for dinner.

Dau expressed his enthusiasm for working with the kids. "It's really neat - and it's so predictable. The kids get here the first day and most of them are pretty subdued. They're faced with a bunch of white bureaucrats they don't know, and they don't know what to expect. But after we get out in the boats the first time, and they hold the caribou, and the caribou kick and a few kids get wet, we all meld into just one big crew."

And what did the kids think about it? "Awesome! Cool!" were the standard responses.

After camping in the midst of the caribou migration, the time came for the students to turn in their binoculars and head for home. But their encounters with caribou won't be ending.

In an effort to make western education more relevant to his White Mountain students, Brown is using caribou as the focus for his entire curriculum - from teaching math and science to cultural appreciation and English language. In addition to following the movements of the animals they have just collared and learning more about the biology and management of the Western Arctic Caribou Herd, the students will join local elders on a caribou hunt, prepare a caribou feast for their community, and write articles describing their experiences.

And then there's the genetics project. Several Noatak students will continue to work closely with Heather Cox. Using highly sensitive laboratory equipment the students will attempt to sequence the DNA in the caribou blood they helped collect. Their experiments to learn more about the genetics of caribou will be entered in the statewide science fair competition.

Dau departed Onion Portage satisfied that he will be able to continue to monitor the health and movements of the Western Arctic Caribou Herd. Thirty three more caribou are wearing radio or satellite collars, and blood samples were drawn from more than 100 animals - all done with the students' help.

But just as important to Dau is the opportunity to share his work with the students, and the pleasure he receives from seeing the kids' enthusiasm. He concluded, "It seems to bring out the best in the kids - and I think it brings out the best in us biologists, too."