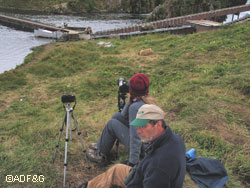 Kodiak bear viewing. A college-level course detailing how to run a top-notch bear-viewing operation is offered in Kodiak.

How can land managers ensure that commercial bear-viewing operations are providing a quality experience for visitors without disturbing bears?

Rules are one way, but on Kodiak Island, a community program is tackling the problem through an innovative and proactive educational approach.

For the past two springs, the Kodiak Unified Bear Subcommittee (KUBS) of the Kodiak Fish and Game Advisory Committee has offered a college-level course detailing how to run a top-notch bear-viewing operation.

It is believed to be the first course of its kind in Alaska and possibly in the United States.

“It’s very thorough,” said Pam Foreman, the Kodiak Chamber of Commerce Community Relations Director. “It’s all about best management practices and details what to do in many different situations.”

Among the topics covered in the three-day class offered through Kodiak College are the history and natural history of Kodiak Island, bear behavior, plus ethical marketing and low-impact bear-viewing. The course is taught by a variety of experts, including biologists, an attorney and long-time bear-viewing guides.

The initial idea for the course came from one of those guides. Harry Dodge, who owns Kodiak Treks with his wife Brigid, brought the idea to KUBS and worked with the group, Kodiak College staff and other local bear-viewing companies such as Munsey’s Bear Camp to develop the curriculum and make the course happen.

"We were concerned that tourists were given the impression that bear viewing tour operators in Alaska had some standard training when in fact none was required,” Brigid Dodge said. “We were also troubled by the behavior of some operators around the state such as throwing rocks at bears or approaching bears until the bears moved off of their feeding source, typically salmon streams.”

Although the course is relatively new, those involved in putting it together say they hope it will eventually become a routine training tool for the bear-viewing industry on Kodiak. They also hope the model might someday spread to other bear-viewing areas, many of which have experienced rapid growth in recent years.

“We're very fortunate to have a very healthy bear population on Kodiak and a unique way of viewing bears,” Dodge said. “Developing the course was our way of ensuring a bright future for Kodiak bears, the community and future visitors." 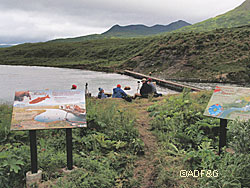 “I think it will continue to make things better,” Foreman said. “I think it will eventually be of enough value that businesses will look to it to train their employees. It is catching on.”

The course was also one of the recommendations in a comprehensive bear management plan sponsored by the Alaska Department of Fish and Game but crafted by a wide variety of community stakeholders. The plan was completed in 2002 and resulted in over 200 recommendations of ways to conserve and co-exist with bears on Kodiak. Larry Van Daele, Kodiak area biologist with the Alaska Department of Fish and Game, said the underlying theme of the recommendations for bear viewing was to be proactive and prevent overcrowding or mismanagement problems that have plagued other bear-viewing areas in Alaska. The Dodges and others involved in crafting the course worry that without some sort of industry standards, expanding bear viewing operations could ultimately have a negative cumulative impact on Alaska’s bears.

“The experience we want to provide on Kodiak is not necessarily an up-close experience, or one with lots and lots of bears,” Van Daele said. “It’s a more holistic experience. We want to remind people they are a visitor in the bears’ home. First you need to know about their home – the geology, vegetation and fisheries – and then learn about the bears themselves.”

Jo Murphy, co-owner of Seahawk Air and a bear-viewing guide, said the course filled a need. Before the course was initiated, those interested in starting a bear-viewing operation had limited resources to learn what they needed to know.

“There are a lot of people jumping in to the industry with no background whatsoever,” Murphy said.

Van Daele said that was especially true this past year when road sightings of bears became so common that even taxi cabs jumped in the lucrative bear-viewing industry, offering cab rides to go look for bears.

Gary Wheeler, manager of the Kodiak National Wildlife Refuge, said he took the course last spring to learn more about the industry and what information a guide might need to run a quality bear-viewing operation. The fish pass at Frazer Lake, within the refuge, is one of the island’s premier bear-viewing spots. 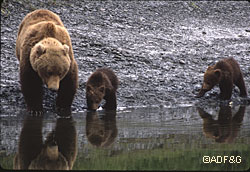 A mother brown bear and her cubs.

“If someone is going to conduct a wildlife-viewing operation, we want them to do it ethically so they are not impacting the animals they are going to observe,” Wheeler said.
His agency is currently considering possibly opening up another refuge area on the south end of Karluk Lake to guided bear-viewing operations by 2011. If the KUBS bear-viewing course continues and is offered on a more frequent basis, Wheeler said the refuge may consider requiring guides to take the course as a condition of their permit.

Those involved in putting on the course said another Kodiak College course is currently planned for March 2010. KUBS is also looking at ways to get the materials out more widely and more frequently, including possibly recording the course and making available on a DVD.

Wheeler said one thing he liked about the class was the level of detail provided, especially on topics such as bear behavior that may not be entirely intuitive. For example, if a bear turns away that often means it does not want to be approached. Or a bear turning sideways might be a subtle display by the bear meant to indicate its size. A bear slowly moving towards you, on the other hand, typically indicates that the bear is comfortable with your presence and that you are fine to remain still.

Another important topic covered in the course is how to approach and leave bear-viewing areas – whether by skiff, plane or on foot – in a manner that minimizes disturbance to the bears. Van Daele said the course strives to encourage a sense of stewardship among bear-viewing guides and clients.

Rather than focusing on getting the perfect photograph, the course encourages bear-viewing guides and clients to see themselves as part of the ecosystem, and as stewards who have a responsibility to the land – and to the bears. “What we’re trying to sell here in Kodiak is quality, not quantity, and we hope the people who visit here leave as ambassadors for the bears in Kodiak,” Van Daele said.

Elizabeth Manning is an outdoor and science writer in Anchorage. She works as an educator for the Division of Wildlife Conservation at Fish and Game.