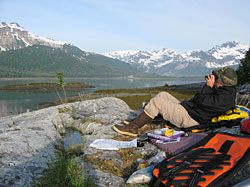 Equipped with binoculars, a mosquito headnet, a stopwatch and data forms, a surveyor counts murrelets in Glacier Bay.

Audubon Alaska and the Alaska Department of Fish and Game teamed up to put 20 researchers in Glacier Bay this summer to investigate reported declines in Kittlitz’s and marbled murrelets.

Southeast Alaska has been a stronghold for the marbled murrelet, an otherwise rare seabird. Elusive and secretive elsewhere, these robin-sized fish eaters are the most common seabird in Southeast. That may be changing. Recent evidence suggests numbers of both marbled and Kittlitz’s murrelets have declined 90 percent in Southeast Alaska over the past two decades. For 10 days in early July, biologist Matt Kirchhoff led murrelet watchers (five crews, in two boats and three field camps) to repeat surveys that were last done in 1993, and to learn more about the feeding ecology of these birds.

Kirchhoff worked for Fish and Game for many years as a wildlife biologist and now is the Director of Bird Conservation for Audubon Alaska. The state agency and the nonprofit were partners in the research, with help from the National Park Service.

“There’s a lot we don’t know about murrelets,” Kirchhoff said. “Both Kittlitz’s and marbled murrelets appear to be declining sharply in Southeast Alaska, based on surveys that were done in 1991, compared to 1999-2003.”

Marbled murrelets are listed as endangered and threatened over most of their former range along the Pacific Coast from California north to British Columbia. The decline in the Pacific Northwest and adjacent areas is attributed to extensive logging of the old-growth nesting areas, but even before the decline, these birds were very rarely seen. They spend most of their lives at sea, and are very secretive nesters when ashore.

“This is a very elusive bird for people to see down South,” Kirchhoff said.

That’s not true in Southeast Alaska, home to the world’s greatest concentration of murrelets. The waters of the Inside Passage provide outstanding opportunities to see marbled murrelets.

“It’s the most abundant seabird by far in Southeast Alaska,” Kirchhoff said. “It’s a really fascinating bird, and underappreciated. They aren’t as dramatic as humpback whales but they’re quite interesting in their own right.”

They also have something in common with humpback whales – their diet. The big whales and the little seabirds are both top-level predators of forage fish and can be found together, feeding on schooling fish and krill, a shrimp-like plankton. Whales have even been known to ingest the birds in the frenzy of feeding. Kirchhoff said biologists are looking into how the birds and the whales share the same feeding areas and food resources.

For a number of years Kirchhoff worked with marbled murrelets in the waters just south of Juneau, in Stephens Passage, Tracy Arm and Port Snettisham. He saw thousands of birds, and on the basis of those surveys, Port Sentisham has been designated a globally Important Bird Area by Bird Life International and Audubon. He’s since found an even higher concentration of birds in and near Glacier Bay – the “murrelet triangle.”

This area is bounded by Sitakaday Narrows in Glacier Bay, Point Adolphus on North Chichagof Island, and Lemesurier Island in Icy Strait. It’s an amazing food-rich area that draws whales, murrelets and other predators.

“This is a really important feeding area, and the numbers (of murrelets) are absolutely phenomenal,” Kirchhoff said. During the summer, marbled murrelets nesting in surrounding forests congregate in the area to forage. “It’s a major attractant, and there are tens of thousands of birds a day coming in to the area.” 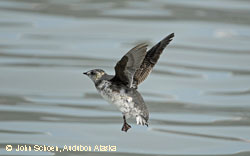 The upwelling of cold, nutrient-rich water brings feed. In Glacier Bay, a submarine glacial moraine creates shallows in the Sitakaday Narrows, and a falling tide creates currents that pull deep waters to the surface.

This triangle draws thousands of murrelets in the summer, and small numbers in winter. Where the birds go in the fall and winter is one of the murrelet mysteries. “The bulk of the birds appear to go offshore,” Kirchhoff said. “But we don’t really know. We haven’t had satellite transmitters for birds this small.”

Murrelets are flightless for about six weeks each fall, as they lose their primary feathers in a seasonal molt and grow new feathers.

Glacier Bay is a stronghold for Kittlitz’s murrelet, with the largest breeding population in the world. Alaska is the only state where Kittlitz’s murrelets breed, and the icy fjords of Glacier Bay offer the rare opportunity to consistently find these birds during the breeding season. A close cousin to the marbled murrelet, and very similar in appearance, Kittlitz’s murrelets favor the more recently glaciated landscapes further “up bay.” These murrelets nest on rocks – in talus slopes and alpine – rather than forest. Recent reported Kittlitz’s declines of 80 to 90 percent in their breeding areas have prompted the U.S. Fish and Wildlife Service to designate this species as a candidate for listing under the federal Endangered Species Act.

Kirchhoff has questions about these birds as well as the marbled murrelets.

“Glacier Bay has the highest rate of glacial retreat in the world – 60 miles in the past 225 years,” Kirchhoff said. “How have they responded to this change in Glacier Bay? What habitats do they prefer and what are their activity patterns?”

That observation paid off.

“We saw thousands of marbled murrelets and hundreds of Kittlitz’s murrelets, including one flock of 24 Kittlitz’s,” said Sadie Wright. Wright is a Fish and Game biologist, working on the department’s endangered species team. Of the 20 researchers, 15 were volunteers. Most of these volunteers are scientists, and included Kitty Labouty, a botanist from Sitka, and retired biologists from Wisconsin, Washington and California with a special interest in Glacier Bay or the birds. Two volunteers provided their own large vessels.

Wright was aboard the research vessel Gravina. Part of the project was to use the Gravina to repeat an earlier marbled murrelet survey in the bay. To compare results accurately, the exact same methods were used.

Researchers conduct a murrelet survey aboard the Gravina. Photo by Holly Hughes.

“We were replicating counts of murrelets that were done in 1993,” Wright said. “We had all the original points from the ’93 survey. The best part is the guy who did the original count was with us for this anniversary count, John Lindell. We went up almost every inlet, criss-crossed Glacier Bay, and went up the arms.”

The researchers also used a second boat and repeated the entire survey three times. In addition, there were land-based crews at camps in Wachussettes Inlet, Reid Inlet and Blue Mouse Cove. These areas are north of the great concentrations of marbled murrelets in Sitakaday Narrows and researchers in camps focused on observing Kittlitz’s murrelets.

Clayton Hawkes worked with the crew in the field camp at Blue Mouse Cove and spent much of his time glued to a spotting scope.

“We did flyway counts across the west arm and focal point counts in Hugh Miller and Skidmore Inlets, he said. “Using a great big spotting scope, we basically count every murrelet as they fly across, up and down the inlet, for a 15 minute period every half hour.” Unlike the thousands per hour counted in the “murrelet triangle,” Hawkes said the numbers were pretty low in the area he worked, and might involve seeing 20 to 30 birds in a 15 minute period.

“You need to be able to identify murrelets from other birds – the murrelets are like bullets, they have that look, and their flight is very distinctive.”

The powerful spotting scope allows the murrelet watchers to see birds hundreds of yards out and even further in good conditions. In an unusual turn of events for Southeast Alaska, for a few days the sun was so bright it impeded viewing. “There was a lot of shimmer on the water, and these birds fly close to the water,” Hawkes said.

Observers also did focal point counts, where they surveyed all birds on the water in a specific area once an hour. They also observed foraging behaviors, looking at how long birds spent underwater, how long they spent at the surface after diving, and if they came up with a fish.

Fish and Game biologist Karen Blejwas ran the camp at Reid Inlet. “We saw tons of birds, including oystercatchers, and terns with chicks. And a very well behaved brown bear in the sedge meadows,” she said. “Most of the time the murrelets were far out, and they really shifted their patterns, Some days there were none, other days there were hundreds. We didn’t see as many birds foraging as we thought we would. But on a number of days, especially in the evenings, we’d see lot of birds holding fish - sometimes whole rafts of them resting in the water with fish.”

Those resting birds with fish are waiting for dusk, when they fly back to their nests and feed their young.

Kirchhoff said Glacier Bay offers a unique opportunity to study murrelets, and to put what is learned into a larger ecological context.

“There’s been so much good research in Glacier Bay,” Kirchhoff said. “Much is known about the patterns of animal distribution, plant succession, the phytoplankton and zooplankton. Oceanographers, glaciologists, whale biologists and fish biologists have all contributed.”

Kirchhoff has reviewed the data gathered and is preparing it for publication. The work should offer some insights into the current state of murrelets in Glacier Bay and their behavior.