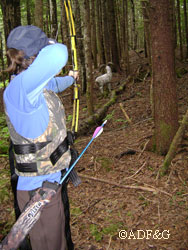 The number of hunters in Alaska is in steep decline, according to a survey released last year by the U.S. Fish and Wildlife Service. There’s just one problem – it’s not true.

The report, “2006 National Survey of Fishing, Hunting and Wildlife-Associated Recreation: Alaska,” released in May 2008, compared hunters in Alaska in 2006 to hunters in 2001 and reported 26 percent fewer hunters. The 81-page report contains a lot of information, but that detail was highlighted in the news, triggering an outcry of concern that hunters are a dying breed in Alaska.

That didn’t ring true for Bob Sutherland, a biometrician with the Alaska Department of Fish and Game. Sutherland works with hunter harvest data, among other things, and he just didn’t see that trend.

“If the number of hunters dropped three percent or eight percent you’d be asking, ‘What happened?’ A 25 percent drop would be really striking,” he said. “We haven’t seen that drop in numbers.”

The USFWS survey reported that there were about 55,000 Alaska resident hunters in 2006. They contrasted that with their 2001 figure of 74,000 Alaska hunters – a 26 percent decline.

Sutherland knew from harvest data that the number of hunters had not declined by 26 percent. But how do you answer the question, “How many hunters are there in Alaska?”

The USFWS used telephone surveys. Sutherland looked at harvest data over a five-year period. He tracked individuals who entered the Division of Wildlife Conservation’s hunter harvest system and then detailed their reappearance over time.

“If they came in on a registration hunt, a draw hunt, or a general season hunt for big game animals, they enter Wildlife’s hunter harvest system,” he said. “We can uniquely identify him, and now I can track that guy.”

Sutherland found that 174,272 Alaska residents went hunting between 2003 and 2007, about 25 percent of the total population. Overall, he found the number of hunters is stable.

The number of unique resident hunters who have obtained at least one harvest ticket in a year is another trend indicator. State records indicate that consistently between 56,000 and 66,000 resident individuals (age 16 and older) participated in big game hunting. There is no evidence to indicate a significant drop in participation in big game hunting by Alaska residents during this period. 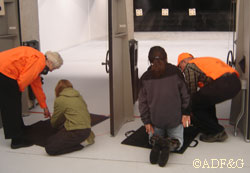 About 3,800 people took Hunter Education classes in Alaska in 2008.

Sutherland added that his numbers don’t reflect trappers, any bird hunters (upland and ducks) or bear hunters unless they hunt on a draw ticket. So those are additional hunters.

Using the hunter harvest data, Sutherland performed a mark-recapture experiment on Alaska hunters. Mark-recapture is a fundamental tool used by wildlife biologists, a technique that allows biologists to estimate numbers of animals.

“I did a mark recapture experiment just like you do with grouse or bears. But I’m using humans,” he said.

Sutherland found some interesting things about Alaska hunters. Comparing hunters year-to-year over five years, he found about one-third only hunt one year and do not reappear in the system. About one-third hunt every single year, and about one-third skip a year or two.

“The Fish and Wildlife Service said there were 25 percent fewer hunters, and I show indeed that is not the case,” Sutherland said. 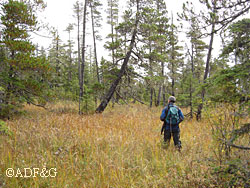 A preliminary copy of the Survey was provided to state biologist for review prior to publication, and the Department of Fish and Game contacted the USFWS regarding the discrepancies. As a result, the final survey contains the following caveat:

“The Alaska Department of Fish and Game (ADFG) has expressed concerns regarding Alaska participation and trend estimates from the 2006 National Survey.”

So why was the USFWS survey so wrong? This was a national survey, with state components. The Alaska sample size was relatively small, probably too small, and very likely, the surveyors asked the wrong questions at the wrong time. Information in the survey was gathered by the U.S. Census Bureau through telephone interviews conducted in the springtime, and initially, about 550 Alaska households participated. Callers were asked if they had already participated in hunting or fishing in 2006 at the time of the interview, and were then categorized. Follow-up interviews were conducted with about half that number of designated “sportspersons.” Although the flaws in survey methodology are not completely clear, it’s apparent that many hunters (and anglers) were dismissed or underrepresented in the process.

Bruce Bartley, an information officer with Fish and Game, pointed out that the number of people benefiting from hunting – eating wild game – is much larger than the number of hunters, particularly in some rural areas where a few hunters provide lots of game for numerous people in the village. Sutherland echoed that sentiment.

“I share my game with friends,” he said. “Everybody I know shares this stuff, so it’s benefitting a bigger segment of the population than just the hunters.”

Riley Woodford is an information officer with the Division of Wildlife Conservation. He can be reached at riley.woodford@alaska.gov