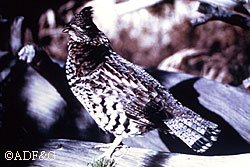 Ruffed grouse are not native to Southcentral Alaska; Fish and Game biologists introduced 152 ruffed grouse from the Fairbanks area into the Mat-Su area around 1990.

Some dreams take a while to realize. But after more than 20 years, there is now a growing population of ruffed grouse in the Mat-Su area.

The project is a partnership between the Ruffed Grouse Society and the Alaska Department of Fish and Game. The first step was to introduce birds to the region. Ruffed grouse are not native to Southcentral Alaska. The birds’ natural habitat is north of the Alaska Range in aspen forests, in hardwood forests along the Yukon-Kuskokwim Delta and in the Taku and Stikine river drainages in Southeast Alaska.

Back in 1988-1990, after obtaining the necessary permits, Fish and Game biologists introduced 152 ruffed grouse from the Fairbanks area into the Mat-Su area.

The birds did well, but one concern was whether they would have suitable habitat to grow the population. To help increase the amount of good habitat, the nonprofit Ruffed Grouse Society began looking into doing some habitat enhancement projects.

Eventually, a new chapter formed to take up the work – the Southcentral Alaska Chapter.

Since 2001, through the joint efforts of the Southcentral Alaska Chapter of the Ruffed Grouse Society and Fish and Game, nearly 500 acres of aspen stands have been cut in the Matanuska Valley Moose Range to benefit ruffed grouse, according to Tim Peltier, assistant biologist for the Mat-Su area with the Alaska Department of Fish and Game.

The moose range, located east of Palmer, is state land managed primarily for the benefit of moose. 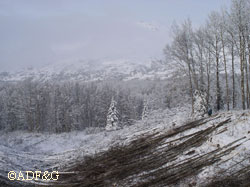 Nearly 500 acres of aspen stands have been cut in the Matanuska Valley Moose Range to benefit ruffed grouse, and this also benefits moose.

“The more habitat you can provide, the better the birds will do,” said Nick Steen, a member of the Ruffed Grouse Society and a retired Fish and Game biologist who oversaw the initial introduction efforts.

Fish and Game handles the permitting and contracting of the cutting while the Southcentral Alaska Chapter of the Ruffed Grouse Society has provided most of the funding, Peltier said.

To date, the grouse nonprofit has supplied $135,000 for habitat enhancement at the moose range. The Rocky Mountain Elk Foundation has contributed another $3,000.

The cutting has been done by contractors who hand fell the trees using chainsaws. It is typically done early in winter before the snow is deep. The timber is usually left in place.

Cutting aspen creates new aspen growth, which is good for grouse. The best ruffed grouse habitat consists of aspen stands about 10-20 years old where the trees are about as big around as a wrist, 20-30 feet tall and dense enough to provide cover from aerial predators, according to Steen.

The bird’s primary predators are goshawks, which maneuver well in tight areas. Other birds of prey, including owls, also take grouse, Steen said. Ground predators of ruffed grouse include lynx, coyote and fox.

Grouse depend on the buds and twigs of aspen trees for winter food, along with birch, willow, high bush cranberry and rosehips, when available. Other times of year, grouse eat a more varied diet that includes berries and insects.

The habitat enhancement project is a partnership that works well for everyone, Peltier said. Although there is no formal population estimate, the birds appear to be thriving and are spreading into new areas, according to Peltier and Steen. 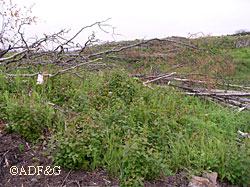 As an added benefit, moose also like the freshly cut areas, Peltier said. With the cut areas generally larger than 10 acres, moose will feed along the edges while grouse feed and seek cover on the inside, Peltier said.

The Ruffed Grouse Society in Alaska also works on other habitat enhancement efforts to benefit grouse, including a project near Houston and a proposed project on the Kenai Peninsula in the Skilak Loop area. Ruffed grouse were also introduced on the Kenai Peninsula, with 250 birds released from 1996-1998. The ruffed grouse introduction on the Kenai, while successful, has not grown as quickly as the Mat-Su population, Steen noted.

One of the main fundraisers for the Southcentral Alaska Chapter of the Ruffed Grouse Society is the group’s annual banquet. This year’s banquet begins at 5 p.m. on April 4 at the Egan Civic and Convention Center. For more information, go to www.ruffgrousesociety.org and follow the link for events and banquets. Or call Nick Steen at 745-2739.