The Murrelet Watch Program Sets Up in Icy Strait 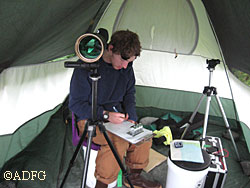 Waking to the blasting exhalations of a 40-ton mammal may be one of the more exciting ways to start a day. Such mornings were routine on northeast Chichagof Island, where we camped inside Whitestone Harbor, well within earshot surfacing, spouting humpback whales.

Emerging from our tents and donning raingear and headlamps, two of us made our way in the pre-dawn twilight along a rough trail from our forested campsite to the rocky point where another day’s work of observing and counting marbled murrelets would begin. Below our tarp, serving as both kitchen and observation shelter, we set up spotting scopes. We scanned the water until Rocky Island came into view, the closest visible land in the middle of Icy Strait, orienting our field of view. We took turns looking through the scopes, tallying on handheld counters the number of murrelets flying by in each direction. These first counts of the day typically started off slowly, the number of murrelets rising steadily into the hundreds during a 15-minute survey. During peak periods we were witness to over 2,500 of these unique seabirds per hour.

Working alongside ADF&G staff, volunteers from across the region conducted these “flyway counts” as part of the Murrelet Watch Program This citizen-science monitoring program has been in place for two years with over 40 trained volunteers dedicating time and energy to gathering quality data about the distribution and abundance of marbled murrelets in Southeast Alaska.

While the days began early and finished late, for those involved in the flyway counts, it was time well spent. When asked about her experience, one regular volunteer Marge Osborn commented, “This was one of the best organized and well carried-out programs I have ever participated in. This experience not only piqued my interest and taught me a great deal about murrelets and the value of careful scientific research, it also gave me much to share with friends, who in turn learned about the birds.” 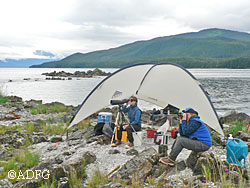 The murrelet watchers at Whitesone Harbor

Marbled murrelets are relatively abundant in Alaska compared with populations in British Columbia, Washington, Oregon and California, where they are listed as ‘threatened’. Their numbers in Alaska, however, have been reported to be declining as well. One United States Geological Survey (USGS) concluded that populations in Alaska have undergone a 71% decline since the early 1990’s. Scientists do not know the exact cause of the decline, but suspect multiple factors are involved.

The bird is a secretive, solitary nester, preferring the mossy boughs of centuries-old trees in coastal rainforest. Murrelets forage on schooling small fish, such as herring, capelin and Pacific sand lance. In Icy Strait, during the July breeding season peak, murrelets move from east to west in the early morning hours, returning in the opposite direction in the evening hours. The waters of western Icy Strait, from Point Adolphus to Lemesurier Island, are an important foraging area for Marbled Murrelets, drawing many birds from long distances.

In addition to the Icy Strait surveys based at Whitestone Harbor and Point Couverden, volunteers from five participating Southeast communities have also been doing flyway counts. When comparing the data collected from the two remote field camps in Icy Strait to the data from these community counts, the sheer volume of birds passing through Icy Strait is staggering. While the community counts served as ideal training grounds for our cadre of volunteers, the numbers of murrelets observed from any of these communities (Juneau, Sitka, Wrangell, Petersburg and Sitka) were very small by comparison. 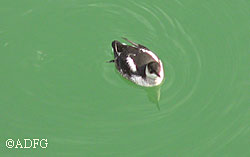 A young marbled murrelet in Harris Harbor in Juneau

We look forward to continuing this citizen-science monitoring effort next year and hope that our enthusiastic and dedicated volunteers will join us again. We also look forward to adding new members to the team.

Peter Dwyer, a seasoned Murrelet Watch Volunteer from Ketchikan, shared this view about his time counting murrelets in Icy Strait, “ADF&G provided all we would need in terms of training and follow-up. We were with a knowledgeable biologist and the whole experience enriched our lives. The whales, were an added amazing joy.”

Please consider joining us next summer. For more information about the Murrelet Watch Program or if you are interested in learning more about the biology, research and conservation of these fascinating seabirds, please contact Wildlife Education Specialist, Kristen Romanoff by email: kristen.romanoff@alaska.gov or give her a call at
(907) 465-4292.