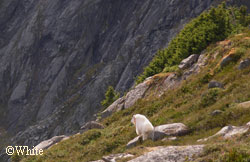 Until recently, telling the difference between a nanny goat and a billy goat was most important only to another mountain goat.

It’s tough to tell the sex of a mountain goat. Discerning hunters prefer billies, which are larger than females, but both nannies and billies have sharp horns, burly bodies and thick white wooly coats. Size is relative and goats are elusive, making goats difficult to inspect. Mountain goats favor hard-to-reach, open country - cliffs and ridges that allow them to keep their distance from predators. For a hunter on a mountainside, peering through binoculars at a wary animal, or even a group of wary animals, positive determination of gender is a tough call.

So tough that in Alaska, wildlife managers have allowed mountain goat hunters to take either a billy or a nanny. Although a nanny with kids is off-limits (and the presence of kids is a pretty good indication of gender) solo nannies may be taken. But that’s not the best situation. Ideally, biologists would like hunters to determine the gender and take only billies. That’s better for the goat populations, and it’s better for the hunters.

The Alaska Department of Fish and Game has worked to educate hunters about mountain goats, and just produced a new mountain goat identification guide to help hunters with this issue. The free 48-page guide features dozens of color pictures highlighting the many subtle clues that distinguish nannies from billies. 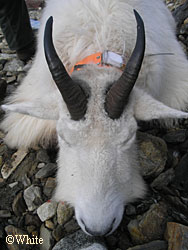 Although both nanny and billy goats have horns, there are subtle differences that can help identify the gender. This billy shows characterisitics of male horns - the bases are large and close together,thick throughout length, and gradually curving.

A short introduction presents the tell-tale behavioral and physical characteristics of each gender. Then goat-watchers are quizzed with a series of pictures – nanny or billy? – and answers are provided with a discussion of the most important clues featured in each image. After 20 pages of highlights, the subtle differences seem more apparent: the shape and curve of the horns, the head and face, the shoulders, the wooly “pantaloons,” and urine stains on the coat.

Ideally, a hunter should spend time with a spotting scope or binoculars closely observing the goats he or she is stalking. Look beyond the features at behaviors: which animals are associating most closely with yearling kids and other adults; what is the urination posture.

Effectively targeting males means more goats and more hunting opportunity. Mountain goats don’t reproduce as early, or have as many offspring, as deer and moose. Although deer and moose have young at two and three years of age, respectively, mountain goats do not give birth until they are four or five years old. And while moose and deer often have twins, twinning is rare for mountain goats. This low productivity means that individual female mountain goats are very important to the overall population. It can take years to replace one harvested female goat.

Current mountain goat management in Alaska relies on a harvest quota system to regulate the number of goats taken from particular areas. All areas are limited to a certain number of points representing harvest, and billies count as one point while nannies count as two points. Thus, the harvest of males can be twice the harvest of females. This provides more opportunity for hunters and assures a productive and sustainable goat population. 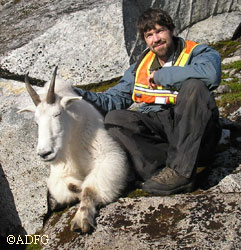 Mountain goat researcher Kevin White contributed to the Mountain Goat Identification Quiz and took many of the pictures in the guide. He is shown here with a newly collared subject north of Juneau.

Mountain goats are found in only a few western states and Canadian provinces, and some states have implemented billy-only hunts. Alaska Fish and Game biologist Kevin White, who photographed many of the goats in the guide and helped produce it, said these states often require hunter training before the hunt. He added that getting the opportunity to hunt a mountain goat in the Lower 48 is usually a once in a lifetime hunt so people take it pretty seriously.

Mountain goats are hunted in the fall in Southeast Alaska; the exact dates vary from area to area, August through December in some places and September through November in others. Many hunters concentrate their efforts in October, when storms and snow push goats down from their high-elevation haunts and make them somewhat more accessible.

The “Mountain Goat Identification Quiz” is available at Fish and Game offices throughout Southeast. In Juneau and Douglas, that’s the Region 1 office by the Douglas post office.

Riley Woodford is a writer with Fish and Game, living in the mountain goat country of Southeast Alaska.