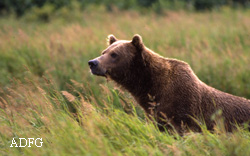 a few strands of hair - with follicles that contain DNA - can identify an idividual bear and reveal the species of bear,the gender, and relatedness to other individuals.

Biologist Ryan Scott with the Alaska Department of Fish and Game described the hair snare as a loop of cable set a few feet over a bear trail near a salmon stream.

“There are a few pieces of barbed wire clipped to the cable,” Scott said. “A bear sticks its head through the loop, which tightens and then breaks free. The barbed wire lies over the bears’ shoulders and collects a few clumps of hair, then lies on the trail. It’s a single catch, so we get hair from one bear.”

Scott said people can simply walk around the snares if they encounter them. Yellow signs labeled “Hair Collection Stations” are prominently placed in the areas to alert people. 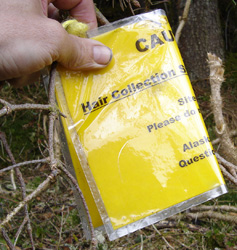 A sign at Sawmill Creek alerts kayakers, picnickers and anglers that hair snares are in the area.

The project began in the summer of 2006 and ran in 2007 as well. Snares will be up for about a month, from late July to late August.

Biologists check and reset the snares once a week. Last year they saw only one bear, although there was abundant bear sign and lots of bear activity in the area.

Results so far indicate a mix of black and brown bears. Black bears seem more abundant than brown bears near the intertidal areas, probably because they are more tolerant of human activity. 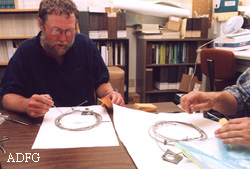 “How unique are these bears relative to other populations around Southeast and Canada,” Scott said. “Have been they isolated for a significant amount of time? Do they have a unique genetic signature compared to the Chilkat Valley bears, or Unuk river bears?”

Scott said the answers could affect how bears are managed.

Biologist Rod Flynn said this year they may add Cowee Creek to the study area as well. The creek crosses the highway near the end of the road and is a popular salmon fishing stream for people and bears.

“There are quite a few brown bears on Cowee Creek,” Flynn said. “We knew there were black bears there but it seems there are a lot more brown bears using the area than we anticipated, especially above the bridge.”

Riley Woodford is a writer with the Alaska Department of Fish and Game. He edits Alaska Fish and Wildlife News and produces the “Sounds Wild” radio program.