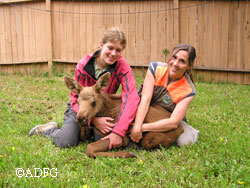 Intern Alena Gerleck and wildlife biologist Jessy Coltrane with a moose calf. Fish and Game staff biologists are usually able to reunite calves with their mothers when they are separated. Photo by Rick Sinnott.

“It’s really not unusual for a cow to walk off and leave her calf,” said state wildlife biologist Rick Sinnott. “They don’t necessarily hang out with the cow at all times, especially when they're real young. She leaves them someplace she thinks they’re safe.”

The truth is they generally are safe. But every spring, the Department of Fish and Game receives scores of calls to come and rescue “abandoned and orphaned” moose calves.

“Most of these calves are not orphaned and they don’t need rescue,” Sinnott said “People see a calf crying in the backyard, that's a signal for the cow to come get it. It’s a natural response. They’re fine, but people don’t understand that and they feel bad. The first thing we tell them is to wait, unless dogs are chasing it or something. And often people call us and tell us, ‘yeah, the cow came back.’”

Every year, well-meaning people doom moose calves to an unnatural life in confinement – or kill them accidently – by “rescuing” them. It’s dangerous and unnecessary. This is especially a problem in Anchorage, where lots of people and moose coexist. That means that cow moose and calves must also contend with cars, roads, fences and dogs.

“Sometimes they’ve been separated by roads or a fence, or chased by dogs, and it takes a while to get back together,” Sinnott said. “Or the calf has wandered off on its own. But we can usually herd it around and get the calf back to the mother.”

Sinnott and his colleague Jessy Coltrane have had great success reuniting moose calves with their mothers. As a team, they’ve learned some tricks over the years, and they’ve experienced some sketchy situations.

“We don’t recommend the public try this, it can be a dangerous situation,” Sinnott said. “The cows are really defensive. They’ll come running after you, they’ll jump over fences – I’ve seen a cow jump a seven-foot fence. One almost landed on Jessy’s back a couple years ago. I saw her jump and we ran for it. Luckily she didn’t come after us. Once she was back with the calf she didn’t care about us.”

Sinnott said it’s important the calf be reunited to the right cow – its mother – as another cow may kill a calf that’s not her own.

In some situations, where a cow has been killed by a vehicle and the calf is truly an orphan, calves may be placed in a zoo or other facility. But it’s also common that after numerous attempts to find a placement, none is available.

“A zoo is not a preferred option,” Sinnott said. “They don’t live as long, and sometimes there’s just not a place for them. It’s not the healthiest situation. It is sometimes necessary to destroy them, but that's pretty rare, and we haven’t had to do that in a while.”

The situation is a little different in wild areas, away from dogs and fences and urban hustle. But people make the same mistake.

“People will be driving down the highway and see a calf and think it’s orphaned and just grab it,” Sinnott said. “Again, the cow is liable to be close by and those people are risking their lives to get that calf, and they’re just taking a calf out of the wild when it doesn’t need to be taken.’

“That’s one side of the coin, and the other is that things happen in nature, and sometimes calves get eaten by bears or wolves and that’s a natural thing. Bears and wolves eat thousands of moose calves every year, and regrettable as that seems, that’s what those animals do. The bear may be feeding its cubs and needs nutrition, too.”

Sinnott said that more and more often, he’s finding that people are responding appropriately to moose calves. Although he still gets plenty of calls, often it’s situations where he and Coltrane can help reunite a cow and calf, rather than respond to a demand they capture and “rescue” the animal.